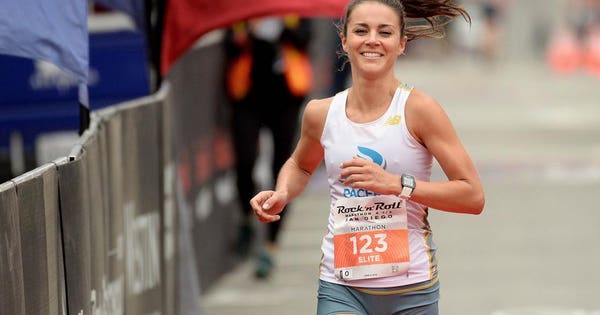 What makes marathoners like Jennifer Brill different? Sure, they have to have guts to finish such grueling races. But what are in those guts? (Photo by Donald Miralle/Getty Images for Rock’n’Roll Marathon)

When a bacteria gives you the runs, this usually means that it causes really bad diarrhea. Such a situation may also prompt you run to the bathroom before things come out badly in the end, so to speak. But what if certain bacteria could give you the runs in a good way? Well, a research letter just published in the journal Nature Medicine offered some poop on how having more of the Veillonellaceae family of bacteria in your guts may somehow be associated with your running ability.

No, this has nothing to do with propelling yourself by farting. This has to do with the mysterious city of bacteria that lives in your guts and how these bacteria may affect your body, your physiology, and your health in different ways. Studies have found that while the poop of elite athletes may still stink just like everyone else, their poop may indeed be different from the poop of non-athletes. For example, their microbiome may include a greater abundance of certain bacteria families such as Veillonellaceae, Bacteroides, Prevotella,  Methanobrevibacter and Akkermansia.

This raises a chicken and the poop question as in which came first. Do these different types of bacteria tend to grow more when you exercise more and live a healthier lifestyle or could certain types of bacteria actually help you become a better athlete? If the latter were true, the phrase having the guts to be a top athlete could have new meaning.

To get some movement on this bowel question, a research team from Harvard Medical School, the Joslin Diabetes Center, and a company called Fit Bionomics conducted the study described in the Nature Medicine research letter and did a poopy job. They first collected the poop of 15 people who had run the 2015 Boston Marathon and 10 people who have done the opposite, remained very sedentary. For the marathoners, they collected “approximately” daily samples of stool up to one week before and one week after the day the runners ran the marathon. This resulted in 209 samples, which meant that the research team had a lot of stool to stand on and on which to conduct ribosomal DNA sequencing.

Such testing revealed significant increases in the amount of Veillonellaceae bacteria in the poop after exercising compared to poop from before exercising. This is referring to the person who produced the poop exercising and not the poop itself exercising, which would be odd. Testing also found that runners tended to have more Veillonella in their poop than non-runners, although this difference was not statistically significantly different.

Here is an American Chemical Society video featuring Jonathan Scheiman, PhD, who led the study and is the co-founder and CEO of FitBiomics:

The second part of the study involved, you guessed it, mice. Not just mice but mice running on treadmills. The research team gave 16 mice Veillonellaceae atypica bacteria from one of the marathon runners and a second group of 16 mice another bacteria called Lactobacillus bulgaricus via a feeding tube that led from the mice’s mouths to their stomachs. Then, the team had the mice run on treadmills and timed how long the mice could go until exhaustion. On average, the mice who got the V. atypica lasted 13% longer on the treadmills than the mice who got the L. bulgaricus.

How might the Veillonellaceae bacteria be helping the mice run longer? Well, when you exercise, your cells break down glucose into pyruvate, which then generates lactic acid or lactate. Lactic acid buildup in muscles causes them to be sore. Apparently Veillonella bacteria relies solely on processing lactate to get its carbon. Thus, the bacteria may be converting lactate into propionate so that there is less lactic acid build up.

The research team conducted other parts of the study to provide more evidence supporting this theory. For example, they collected the stool of 65 ultra-marathoners and Olympic trial rowers before and after they exercised and tested the poop for bacterial gene activity. In the post-exercise samples, they found high activity of all the genes that coded for the metabolic processes converting lactate into propionate. Additionally the team used radioactively-labeled lactate to show that lactate could move from the bloodstreams of mice into their guts. Moreover, they showed that injecting proprionate up the rectums of mice led to increases in their treadmill run times.

All of this is interesting and suggests that gut bacteria could play a role in athletic performance. But before you start playing around with the poop of star athletes, the studies to date still do have limitations. Remember it was mice running on the treadmills and not humans. The chicken and the poop question still has not been completely answered. Elite athletes may do a lot of things different from sedentary people, including having different diets, exposures, types of stress, ways of handling stress, and sleep patterns, all of which could potentially affect their microbiomes. Basically, more evidence and studies needs to come out before you can plop down anything definitive in any way.

How Do They Make Baklava?
When One Black Hole Eats Another… Look Out
NASA Explorers: Cryosphere – The Big Thaw
COVID-19 and food: Slowdowns, layoffs and one silver lining
Stripe leads $20M Series A into Fast, which is building a universal checkout service for e-commerce