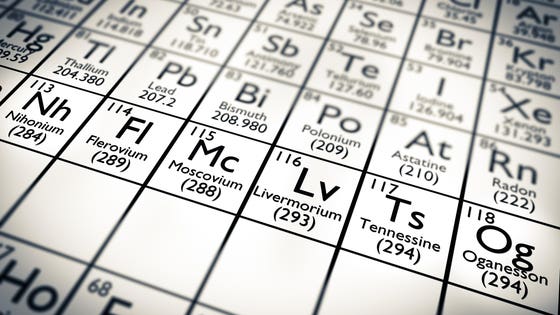 In 1959, comedian Tom Lehrer set the periodic table of the elements to the tune of Gilbert and Sullivan’s “I Am the Very Model of a Modern Major-General”, and created an instant classic that has been watched and shared by chemistry students and teachers over the years.

One notable performance of the song was a rendition by actor Daniel Radcliffe on The Graham Norton Show in 2010. But by then, the song was already horribly out of date.

Lehrer’s lyrics end with the lines “These are the only ones of which the news has come to Harvard. There may be many others, but they haven’t been discovered.” In 1959, there were 102 known elements. By 2010, an additional 16 elements had been discovered since the song was written, and as of 2016 they have all been formally added to the periodic table.

When Dmitri Mendeleev first organised the known chemical elements in the now famous table in 1869, it included only 64 elements. But by simply ordering the elements in the way that he did, Mendeleev was already able to predict the existence of several more. His table had gaps at certain locations, which corresponded with elements that were discovered in the next few years, such as Germanium (discovered in 1886).

Since then, all newly discovered elements are those near the end of the periodic table. They can only be created under controlled conditions, and they’re not very stable, so they don’t occur naturally. Once an element is detected, it has to be formally recognized by the International Union of Pure and Applied Chemistry (IUPAC). The last few elements were made official through this process in 2016. That group included the most recently discovered element, Tennessine, which was detected in 2009.

In 2016, soon after the most recent elements were added to the table, science comedian and musician Helen Arney recorded an updated version of “The Elements”, which includes all the new ones.

To celebrate the International Year of the Periodic Table (IYPT), which marks the 150th anniversary of Mendeleev’s invention, the Royal Society of Chemistry’s magazine Chemistry World is now working on a new rendition of Arney’s song.

“Having seen Helen Arney deliver her updated periodic table song live on stage, I set about looking for ways to incorporate that into our IYPT celebrations,” says Chemistry World’s Digital Editor Ben Valsler. “Helen’s ukulele version is great, but I wanted something a bit ‘bigger’, so I approached the Waterbeach Brass Band to accompany her.”

Chemistry World is planning to release a video to go with the song, for which Valsler hopes to find an international group of chemists to each record themselves saying or singing the name of an element. “We’ve got two Nobel prize-winning chemists so far, and contributions from schools, universities and companies in Australasia, Japan, China, Russia, Europe and the US – and we’re only half way there!”

Their website has a list of the elements that are still available, for anyone who would like to contribute. If all goes well, the video should be out in December.

Researchers have predicted that it will be possible to eventually continue the periodic table by producing elements 119 and up. But these higher elements would be difficult to create and very unstable.

So, for now, the updated song brings us up to date. There may be new elements to add in the future, but, to quote Lehrer, they haven’t been discovered.

Native South Americans were early inhabitants of Polynesia
Chinese Military Shows Off ‘Rifle-Size Railguns’ In New Video
Sweden Stayed Open And More People Died Of Covid-19, But The Real Reason May Be Something Darker
Why Ecologists Study Infectious Diseases And What We Can Learn About Public Health By Studying Nature
The lockdown walk that inspired an experiment