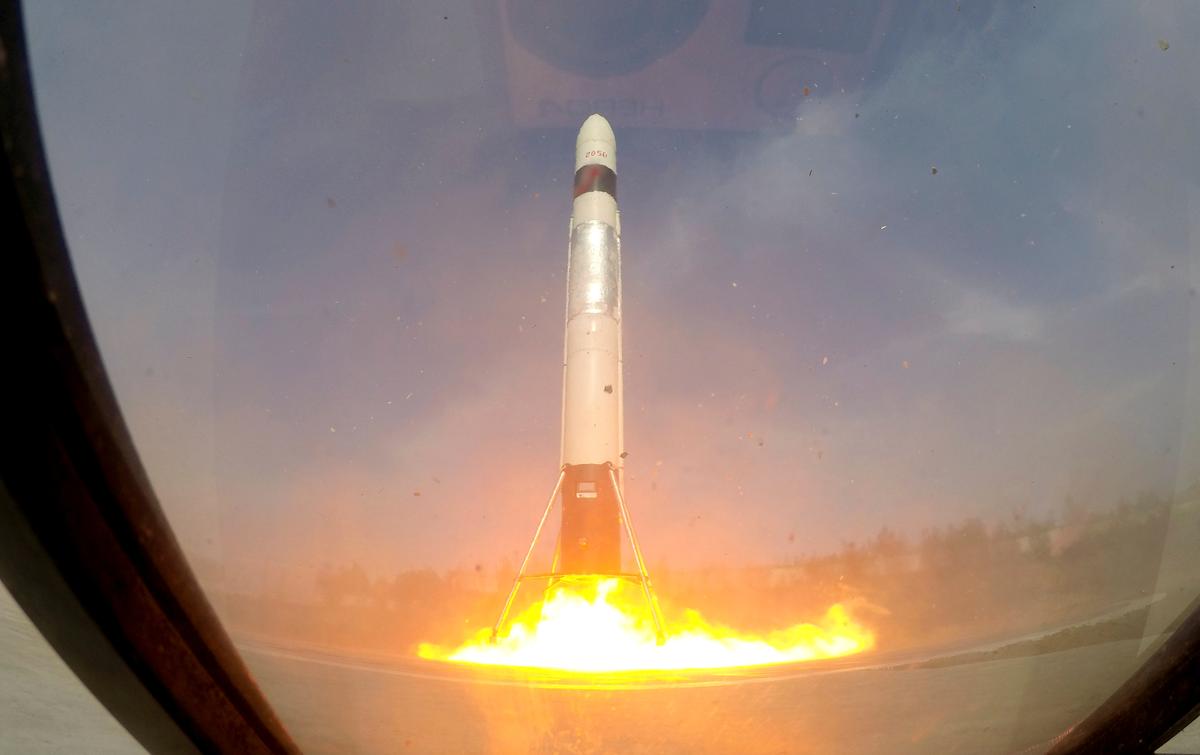 But when the Beijing-based company’s prototype, called NewLine Baby, successfully took off and landed last week for the second time in two months, no tether was needed.

The 1.5-tonne rocket hovered 40 meters above the ground before descending back to its concrete launch pad after 30 seconds, to the relief of 26-year-old chief executive Hu Zhenyu and his engineers – one of whom cartwheeled his way to the launch pad in delight.

LinkSpace, one of China’s 15-plus private rocket manufacturers, sees these short hops as the first steps towards a new business model: sending tiny, inexpensive satellites into orbit at affordable prices.

Demand for these so-called nanosatellites – which weigh less than 10 kilograms (22 pounds) and are in some cases as small as a shoebox – is expected to explode in the next few years. And China’s rocket entrepreneurs reckon there is no better place to develop inexpensive launch vehicles than their home country.

“For suborbital clients, their focus will be on scientific research and some commercial uses. After entering orbit, the near-term focus (of clients) will certainly be on satellites,” Hu said.

In the near term, China envisions massive constellations of commercial satellites that can offer services ranging from high-speed internet for aircraft to tracking coal shipments. Universities conducting experiments and companies looking to offer remote-sensing and communication services are among the potential domestic customers for nanosatellites.

A handful of U.S. small-rocket companies are also developing launchers ahead of the expected boom. One of the biggest, Rocket Lab, has already put 25 satellites in orbit.

No private company in China has done that yet. Since October, two – LandSpace and OneSpace – have tried but failed, illustrating the difficulties facing space start-ups everywhere.

The Chinese companies are approaching inexpensive launches in different ways. Some, like OneSpace, are designing cheap, disposable boosters. LinkSpace’s Hu aspires to build reusable rockets that return to Earth after delivering their payload, much like the Falcon 9 rockets of Elon Musk’s SpaceX.

“If you’re a small company and you can only build a very, very small rocket because that’s all you have money for, then your profit margins are going to be narrower,” said Macro Caceres, analyst at U.S. aerospace consultancy Teal Group.

“But if you can take that small rocket and make it reusable, and you can launch it once a week, four times a month, 50 times a year, then with more volume, your profit increases,” Caceres added.

That is a fraction of the $25 million to $30 million needed for a launch on a Northrop Grumman Innovation Systems Pegasus, a commonly used small rocket. The Pegasus is launched from a high-flying aircraft and is not reusable.

(Click reut.rs/2UVBjKs to see a picture package of China’s rocket start-ups. Click tmsnrt.rs/2GIy9Bc for an interactive look at the nascent industry.)

LinkSpace plans to conduct suborbital launch tests using a bigger recoverable rocket in the first half of 2020, reaching altitudes of at least 100 kilometers, then an orbital launch in 2021, Hu told Reuters.

The company is in its third round of fundraising and wants to raise up to 100 million yuan, Hu said. It had secured tens of millions of yuan in previous rounds.

After a surge in fresh funding in 2018, firms like LinkSpace are pushing out prototypes, planning more tests and even proposing operational launches this year.

“Costs for rocket companies are relatively high, but as to how much funding they need, be it in the hundreds of millions, or tens of millions, or even just a few million yuan, depends on the company’s stage of development,” said Niu Min, founder of FutureAerospace.

FutureAerospace has invested tens of millions of yuan in LandSpace, based in Beijing.

Like space-launch startups elsewhere in the world, the immediate challenge for Chinese entrepreneurs is developing a safe and reliable rocket.

Proven talent to develop such hardware can be found in China’s state research institutes or the military; the government directly supports private firms by allowing them to launch from military-controlled facilities.

But it’s still a high-risk business, and one unsuccessful launch might kill a company.

Space Trek is planning its first suborbital launch by the end of June and an orbital launch next year, said Liang, who founded the company in late 2017 with three other former military technical officers.

Despite LandSpace’s failed Zhuque-1 orbital launch in October, the Beijing-based firm secured 300 million yuan in additional funding for the development of its Zhuque-2 rocket a month later.

In December, the company started operating China’s first private rocket production facility in Zhejiang province, in anticipation of large-scale manufacturing of its Zhuque-2, which it expects to unveil next year.

China’s state defense contractors are also trying to get into the low-cost market.

In December, the China Aerospace Science and Industry Corp (CASIC) successfully launched a low-orbit communication satellite, the first of 156 that CASIC aims to deploy by 2022 to provide more stable broadband connectivity to rural China and eventually developing countries.

The satellite, Hongyun-1, was launched on a rocket supplied by the China Aerospace Science and Technology Corp (CASC), the nation’s main space contractor.

In early April, the China Academy of Launch Vehicle Technology (CALVT), a subsidiary of CASC, completed engine tests for its Dragon, China’s first rocket meant solely for commercial use, clearing the path for a maiden flight before July.

The Dragon, much bigger than the rockets being developed by private firms, is designed to carry multiple commercial satellites.

Spacety, a satellite maker based in southern Hunan province, plans to put 20 satellites in orbit this year, including its first for a foreign client, chief executive Yang Feng told Reuters.

The company has only launched 12 on state-produced rockets since the company started operating in early 2016.

“When it comes to rocket launches, what we care about would be cost, reliability and time,” Yang said.