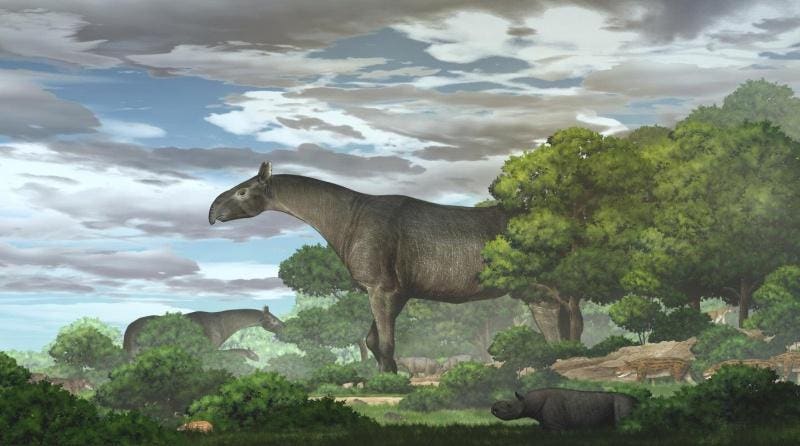 A completely preserved skull and parts of a backbone found in fluvial and lacustrine sediments deposited in the Linxia Basin, a tectonic basin in northwest China’s Gansu province, are the remains of a new species of giant rhino that lived over 26 million years ago. The new species named Paraceratherium linxiaense is described in the journal Communications Biology and represents a “missing link” between various species of giant rhinos that once roamed Asia.

The giant rhino, genus Paraceratherium, was a hornless, long-necked herbivore living in open woodland, reaching an estimated weight of 20 tons – equal to several modern rhinos. The genus is considered the largest land mammal that ever lived, and fossils were found in China, Mongolia, Kazakhstan, and Pakistan. How this animal dispersed across Asia was long a mystery, however.

The giant rhino of western Pakistan represents a single species, Paraceratherium bugtiense. On the other hand, the rest of the genus Paraceratherium, which is distributed across the Mongolian Plateau, northwestern China, and the area north of the Tibetan Plateau to Kazakhstan, is highly diversified, including five species.

The researchers found that all six species of Paraceratherium derive from a single common ancestor. Paraceratherium grangeri is the most primitive species, succeeded by P. huangheense and P. asiaticum. The researchers were thus able to determine that, in the Early Oligocene, about 34 to 28 million years ago, P. asiaticum dispersed westward to Kazakhstan and its descendant lineage expanded to South Asia as P. bugtiense. In the Late Oligocene, about 28 to 23 million years ago, Paraceratherium returned northward, crossing the Tibetan region to evolve into P. lepidium to the west in Kazakhstan and P. linxiaense to the east in the Linxia Basin.

The researchers also note that the climate and tectonic history of Asia played an important role in the evolution of giant rhinos.

The dry climate of the Early Oligocene created a mosaic of forested and open landscapes in Central Asia, allowing this animal, too large to comfortable move through dense forests, to migrate westward.

Geologists know that the collision of the Indian and Asian continents caused the uplift of the Tibetan region. However, controversy still exists regarding when this uplift started and how fast it happened, with dates ranging from the Middle Eocene to the Early Miocene, about 44 to 22 million years ago. Up to the Late Oligocene, the evolution and migration from P. bugtiense to P. linxiaense and P. lepidum show that the Himalaya and the Tibetan region were not yet a barrier to the movement of large land mammals, implying that the modern mountains and high-elevation plateau were still not uplifted at the time, only forming in the last 28 to 23 million years.