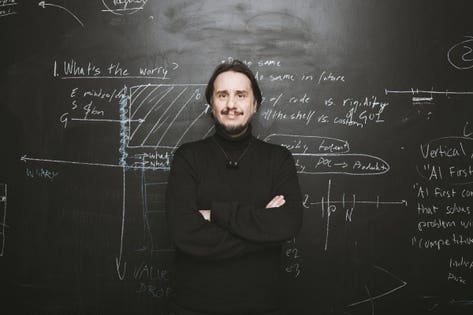 A never-ending debate over artificial intelligence is whether this exciting, deeply-complicated software can really boost a company’s bottom line. One way to find out: build a quick-and-easy neural network and plug it into your legacy system.

In Sweden, engineers who once built the “fruit-accounting” mechanics to support hundreds of millions of Candy Crush users, have joined a startup that’s claims it’s cracked the problem.

Senior engineers from a raft of other Swedish tech unicorns - Spotify, Klarna and Truecaller – have joined too, says their CEO, Luka Crnkovic-Friis. When it comes to attracting talent in the Nordics, “no one comes close,” he says.

Called Peltarion, the Stockholm-based startup has raised $16 million to date from investors and counts BMW, NASA, Ocado and 13 other organizations as early subscribers, with 800 more in line to try it out.

Crnkovic-Friis says that many companies have tried using other, off-the-shelf machine-learning tools like Google’s TensorFlow, Amazon’s Sage Maker and Microsoft’s Azure Machine Learning to build their own image-recognition or natural-language processing systems.

But these tools are “super complex,” he says. “You have to be an AI expert to use them.”

Crnkovic-Friis designed Peltarion to do for AI what WordPress (and before that, Dreamweaver) did for people who wanted to build websites but didn’t know HTML.

It uses a graphical interface to build and train a bespoke neural network, a computer system that’s inspired by the structure of a human brain.  Software developers and junior data scientists who aren’t AI experts should be able to use it, Crnkovic-Friis says.

He recently showed Forbes how the tool worked straight from an open browser on his laptop, navigating to a blank, white screen with a flow diagram of bubbles joined by lines. Each bubble represented a “layer” in the neural network.

Such neural networks are typically used to make sense of, and find patterns in large amounts of complex data — identifying faces in a crowd, for instance, or understanding the content of news articles.

In Peltarion’s tool, each bubble contained parameters that acted as steps the software was taking to build a neural network. The data was sent through each step, and then back up the chain of bubbles to be modified when the network got wrong answers.

Eventually (after a few minutes or hours, depending on the complexity of the data) the neural net should reach a stage where it can generalize, a critical difference between software based on a framework, and today’s widely-accepted definition of artificial intelligence.

Once users have built their neural network, they can integrate it into the code behind their own app or website, allowing it to run on Peltarion’s servers, which it leases from Google Cloud.

How are companies using the tool in practice? One biotech startup that builds MRI equipment used it to build a neural network that could detect and classify tumors on scans in milliseconds, rather than in the hours it would take for doctors, Crnkovic-Friis claimed.

Software developers at a media production company, who had limited expertise in AI, used the tool to build an image classification system that could tag music according to a person’s mood. And an energy client built a neural network that could predict weather changes that would affect wind-power production.

Crnkovic-Friis co-founded Peltarion in 2004 and his investors now include Sweden’s powerful Wallenberg family.

Having run the company as a two-man show for most of the time since, Peltarion has suddenly expanded its staff to 50 in the last two years.

“Before creating the platform my co-founder and I worked with hundreds of businesses on AI projects,” says Crnkovic-Friis. “[We] learnt a lot about the barriers that prevented many organizations from using AI.”

AI-powered software shouldn’t be dominated by a few large technology companies, he adds. “We strongly feel that the best way of making sure that the technology is used for good, is to make sure that more people can use it.”