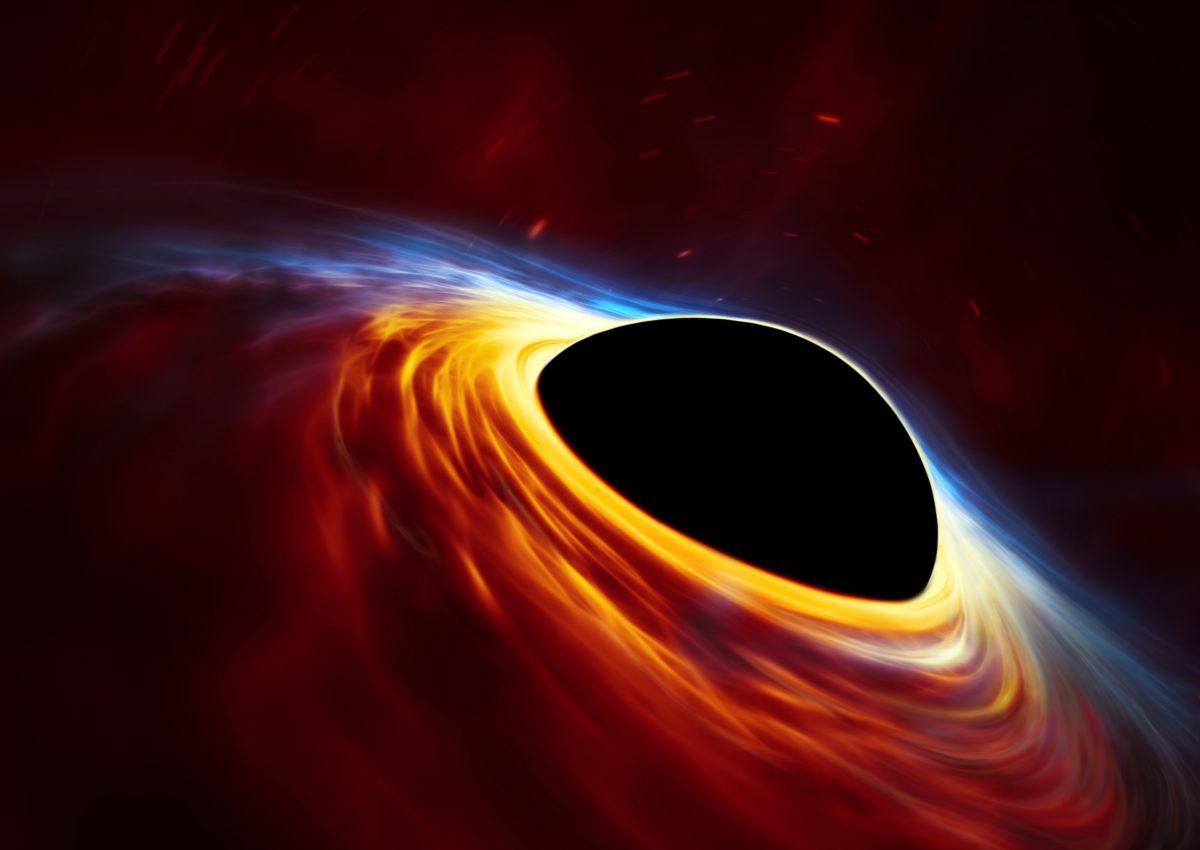 The Universe, as we know it, simply doesn’t add up. On the one hand, we can look out on a cosmic scale and measure — based on how the Universe gravitates, clusters, and evolves — how much total mass there has to be. On the other hand, we can also measure, quite independently, how much matter there must be. These two numbers are both measured to a very high precision with very low uncertainties, and there’s a big problem: they don’t match.

The first number, which tells us how much mass must be in the Universe, is about six times as large as the second number, which tells us how much mass is in the form of known, Standard Model particles. Something must be out there that goes beyond known physics. Even though we don’t know what it is, we have a name for it: dark matter. For many years, a few scientists have argued that, just perhaps, black holes are the answer. But they’re almost certainly not. Here’s the science behind why.


Gerard Lemson & the Virgo Consortium, with data from SDSS, 2dFGRS and the Millennium Simulation

If you want to know how much total mass is in the Universe, there are lots of different ways to measure it that are independent of one another.

In all three cases, you get the same approximate result: the Universe is about ~30% total matter, but only about ~5% normal matter.

Additionally, we can look out at the Universe and count up all the different forms of matter that we can find. We know that stars play a role, as does gas, dust, and planets. There is material in galaxy clusters that lives between the various galaxies, as well as the intergalactic medium, which is full of ionized plasma rather than neutral gas. And there are the burned-out corpses of prior generations of stars, all adding to the total.

When we add up everything we know of, we get a figure: about ~5% of the total energy in the Universe is normal matter. We even have a completely independent way of measuring that, by looking at the ratios of the light elements that were present before any stars were formed. Since nuclear physics is very well understood and so is the Big Bang, all we have to do is put these pieces together to see what comes out. The result? Still 5%.

This is strong enough evidence that we must take the dark matter problem very seriously. Something is causing an excess of gravitation in our Universe over and above what we can explain with the normal matter in our Universe alone.

It could not have come from neutrinos nor any other low-mass, fast-moving particles from the early Universe, or the structures we get out would have been all wrong. Dark matter, in addition to being five times as abundant as normal matter, must have been born cold.

And wherever it came from, it must have been present from a very early stage in the Universe. The light elements (from normal matter) were created just minutes after the Big Bang; the Cosmic Microwave Background was emitted just 380,000 years after the Big Bang. The evidence for dark matter — and that it’s something distinct from normal matter — comes to us from very early on.


ESA and the Planck Collaboration

The idea that black holes could play a role in solving the dark matter puzzle is an old one, going back many decades. Unfortunately, the only ways we know of to form black holes — from stars, from large amounts of collapsing gas, from the mergers of neutron stars, etc. — all involve normal matter as a starting point. And, in a second unfortunate happenstance, we already know how much of the Universe’s mass is in the form of these massive and supermassive black holes, and it isn’t close to enough.

About 0.007% of the total mass of the Universe exists in the form of black holes, and that’s if you add up all the black holes that we think ought to exist. It includes black hole growth and mergers, and includes all of the supermassive black holes at the centers of galaxies. Furthermore, they cannot be too massive, because massive black holes that have existed for a long time will preferentially sink to the centers of massive structures: a process that astronomers have traditionally called mass segregation but would be more accurately described as differential settling.

Even if black holes were the dark matter, they’d have to be lighter than a certain threshold for this reason: dark matter must be distributed in a large, diffuse halo around each galaxy, cluster, and supercluster. It cannot be centrally located in the core of each such structure. When you put all of this together, it paints a very unlikely picture for dark matter being made of black holes.

But there is one scenario that isn’t yet ruled out by everything we’ve mentioned so far: primordial black holes. It’s plausible to think that the Universe might have been born with a large number of very small regions of space with enough mass, overall, to lead to the formation of a black hole through direct collapse. Rather than forming a star, a galaxy, or any other structures that survive until today, they could have been dense enough that they would have formed a population of black holes very early on: what we call primordial black holes.

Theoretically, we can calculate the threshold for just how “above average” in density a region needs to be to inevitably collapse into black holes through this mechanism, and it’s not ridiculously large on the surface: 68% (or so) above the average density. If you had some tiny regions with 68% (or larger) overdensities to them, they could produce a large population of sub-solar-mass black holes, and that could be an interesting dark matter candidate.

If this was how we made black holes, everything would still add up. The abundance of the light elements might not be affected, because all of the “extra mass” would become individual black holes, potentially very early on. The clustering patterns seen in the Universe’s large-scale structure and the Cosmic Microwave Background would be unaffected as well, because the black holes would be created on scales too small to probe with these methods.

And the late-time signals, like gravitational lensing or galactic rotation, would only be sensitive to the overall dark matter fraction that exists, not the individual size of the clumps. We do have individual constraints from things like gravitational microlensing, pulsar timing, and other astrophysical measurements that apply over specific mass ranges, but if we had black holes of just the right mass range — or a series of mass ranges — they could still account for the dark matter.

But it’s almost certainly not to be. The problem is this: we can measure, over a large scale range (from the full sky down to ~0.07 degrees or so), how significant the density fluctuations are. And over that entire range, we find that:

In other words, we need a ~68% fluctuation, but we only have ~0.003% fluctuations. We need them to be enormous on small scales, but they only get smaller as we go to smaller scales. According to the predictions of inflation, there should be no “spike” on small scales, but that’s exactly what we’d need. Although we can cook up any theoretical scenario we’d like, there’s simply no motivation to do so other than “some people would like the answer if we did.”

In science, simply concocting a scenario to give you the answer you’d desire is not the way we approach problems. Instead, we must let the evidence we have be our guide, and consign the rest to an enormous bin of speculative (but not compelling) ideas. While there were many reasons to be excited about Primordial Black Holes in the 1970s and 1980s, the evidence we have today highly disfavors them. It would take a revolutionary new piece of data to bring them back into favor.

The idea that our Universe’s dark matter might be black holes is interesting and deserves scrutiny, and get revived periodically as new generations of scientists take an interest in the old idea for themselves. But the data simply doesn’t support it. Black holes as dark matter are both highly constrained and disfavored for numerous reasons, both theoretical and observational. Until new evidence supporting them comes in, don’t believe the hype surrounding them, no matter how fashionable it becomes.

Daily briefing: The wildly complicated immune response to COVID-19
Airbnb plans to confidentially file for IPO this month
5 Questions With Cannabis Plant Botanist Dozie Mbonu
Cuomo Says All New York Schools Can Reopen Because Of State’s Success In Coronavirus Fight
Perseid Meteor Shower In 3 Easy Steps: When And Where You Can See Spectacular ‘Earth-Grazing’ Shooting Stars