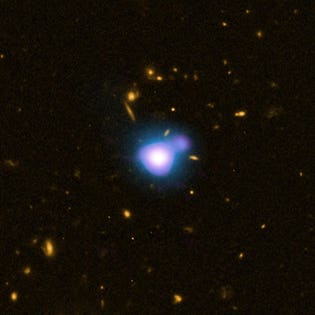 The most distant X-ray jet in the Universe, from quasar GB 1428, helps illustrate how bright these fantastic objects are. If we can figure out how to use quasars to measure the expansion of the Universe, we can understand the nature of dark energy as never before.X-ray: NASA/CXC/NRC/C.Cheung et al; Optical: NASA/STScI; Radio: NSF/NRAO/VLA

For the past generation, we’ve recognized that our Universe is a particularly dark place. Sure, it’s filled with stars, galaxies, and a slew of light-emitting phenomena everywhere we look. But each and every one of the known processes that generate light is based on the particles of the Standard Model: the normal matter in our Universe. All the normal matter there is — protons, neutrons electrons, neutrinos, etc. — represents just 5% of what’s out there.

The other 95% is a dark mystery, but it can’t be any of the particles we know. According to our best measurements, 27% of the Universe is made of some type of dark matter, which doesn’t interact with light or normal matter in any known way. And the remaining 68% is dark energy, which appears to be a form of energy inherent to space itself. A new set of observations is challenging what we presently think about dark energy. If it holds up, everything we know will change.

Without dark energy, the Universe wouldn’t be accelerating. But to explain the distant supernovae we see, among other features, dark energy (or something that mimicks it exactly) appears to be necessary.NASA & ESA, of possible models of the expanding Universe

The best technique we have for understanding what the Universe is made out of isn’t to go out and directly count up everything that’s out there. If that were the only way to do it, we’d literally miss 95% of the Universe, as it isn’t directly measurable. Instead, what we can do is use a quirk of General Relativity: the fact that all the different forms of matter and energy affect the fabric of spacetime itself, as well as how it changes with time.

In particular, by measuring what the expansion rate is today, as well as how the expansion rate has changed throughout our cosmic history, we can use these known relationships to reconstruct what the Universe must be composed of. From the full suite of available data, including information from supernovae, the large-scale structure of the Universe, and the cosmic microwave background radiation, we’ve been able to construct the concordance picture: 5% normal matter, 27% dark matter, and 68% dark energy.

Dark energy is thought to be different, though. Rather than being a type of particle, it appears to behave as though it were a type of energy intrinsic to space itself. As space expands, the dark energy density remains constant, rather than decreasing or increasing. As a result, after the Universe has expanded for long enough, dark energy comes to dominate the energy budget of the Universe. As time goes on, it becomes progressively more dominant over the other components, leading to the accelerated expansion we observe today.

While matter (both normal and dark) and radiation become less dense as the Universe expands owing to its increasing volume, dark energy is a form of energy inherent to space itself. As new space gets created in the expanding Universe, the dark energy density remains constant.E. Siegel / Beyond The Galaxy

Traditionally, techniques to measure the expansion of the Universe have relied on one of two observable indicators.

The difficulty with either of these techniques — the sort of thing that keeps astronomers up at night — is the fear that our assumptions about intrinsic behavior may be in error, biasing our conclusions.

Two of the most successful methods for measuring great cosmic distances are based on either their apparent brightness (L) or their apparent angular size (R), both of which are directly observable. If we can understand the intrinsic physical properties of these objects, we can use them as either standard candles (L) or standard rulers (R) to determine how the Universe has expanded, and therefore what it’s made of, over its cosmic history.NASA/JPL-Caltech

So far, our best standard candles have taken us out very far in the history of the Universe: to light that was emitted when the Universe was approximately 4 billion years old. Considering we’re nearly 14 billion years old today, we’ve been able to measure back extremely far, with type Ia supernovae providing the most reliable and robust distance indicator for probing dark energy.

Recently, however, a team of scientists has begun using X-ray emitting quasars, which are much brighter and, hence, visible at even earlier times: when the Universe was only one billion years old. In an interesting new paper, scientists Guido Risaliti and Elisabeta Lusso use quasars as a standard candle to go farther back than we ever have in measuring the nature of dark energy. What they found is still tentative, but astounding nonetheless.

A new study using Chandra, XMM-Newton and Sloan Digital Sky Survey (SDSS) data suggests that dark energy may have varied over cosmic time. This artist’s illustration helps explain how astronomers tracked the effects of dark energy to about one billion years after the Big Bang by determining the distances to nearly 1,600 quasars, rapidly growing black holes that shine extremely brightly. Two of the most distant quasars studied are shown in Chandra images in the insets.Illustration: NASA/CXC/M.Weiss; X-ray: NASA/CXC/Univ. of Florence/G.Risaliti & E.Lusso

Using data from around 1,600 quasars, and a new method for determining the distances to them, they found a strong agreement with the supernova results for quasars from the past 10 billion years: dark energy is real, about two thirds of the energy in the Universe, and appears to be a cosmological constant in nature.

But they also found more distant quasars, which showed something unexpected: at the greatest distances, there’s a deviation from this “constant” behavior. Risaliti has written a blog post here, detailing the implications of his work, including this gem:

Our final Hubble Diagram gave us completely unexpected results: while our measurement of the expansion of the Universe was in agreement with supernovae in the common distance range (from an age of 4.3 billion years up to the present day), the inclusion of more distant quasars shows a strong deviation from the expectations of the standard cosmological model! If we explain this deviation through a dark energy component, we find that its density must increase with time.

The relationship between distance modulus (y-axis, a measure of distance) and redshift (x-axis), along with the quasar data, in yellow and blue, with supernove data in cyan. The red points are averages of the yellow quasar points binned together. While the supernova and quasar data agree with one another where both are present (up to redshift of 1.5 or so), the quasar data goes much farther, indicating a deviation from the constant (solid line) interpretation.G. Risaliti and E. Lusso, arXiv:1811.02590

This is a notoriously difficult measurement to make, mind you, and the first thing you might think is that the quasars we’ve measured may be unreliable as a standard candle.

If that was your thought: congratulations! This is something that happened once before, when people tried to use gamma ray bursts as a distance indicator to go beyond what supernova could teach us. As we learned more about those bursts, we discovered they were intrinsically non-standard, as well as uncovering our own biases in which types of bursts we could detect. One or both of those two types of bias are likely at play here, at the very least, and that’s going to be generally considered the most likely explanation for this result.

Although discovering why will be an educational endeavor and challenge, this evidence is unlikely to convince many that dark energy isn’t a constant, after all.

” align=”” width=”706″] The expected fate of the Universe is one of eternal, accelerating expansion, corresponding to w (on the y-axis) equaling -1 exactly. If w is more negative than -1, as some of the data favors, our fate will instead be a Big Rip.

But what if this new study is correct? What if dark energy isn’t a constant? What if, as other observations have hinted at throughout the past two decades, it’s actually changing with time?

The above graph shows results from a few different data sets, but what I want you to pay attention to is the value of w, shown on the y-axis. What we call w is the equation of state for dark energy, where w = -1 is the value we’d get for dark energy being a cosmological constant: an unchanging form of energy inherent to space itself. If w is different from -1, however, this could change everything.

The different ways dark energy could evolve into the future. Remaining constant or increasing in strength (into a Big Rip) could potentially rejuvenate the Universe, while reversing sign could lead to a Big Crunch.NASA/CXC/M.Weiss

Our standard fate, where w = -1, will cause the Universe to expand forever, with structures that aren’t bound today driven apart by the effects of dark energy. But if w either changes with time or is unequal to -1, all of this changes.

The Big Rip scenario will occur if we find that dark energy increases in strength, while remaining negative in direction, over time.Jeremy Teaford/Vanderbilt University

The quest to understand the ultimate fate of the Universe has been one that’s fascinated humanity since the dawn of time. With the advent of General Relativity and modern astrophysics, it suddenly became possible to answer that question from a scientific standpoint. Will the Universe expand forever? Recollapse? Oscillate? Or be torn apart by the very physics underlying our reality?

The answer can be determined by looking at the objects found throughout the Universe itself. The key to unlocking our ultimate cosmic fate, though, is dependent on us understanding what we’re looking at, and ensuring that our answers aren’t biased by the assumptions we’re making about the objects we’re measuring and observing. Dark energy may not be a constant, after all, and only by looking to the Universe itself will we ever know for sure.