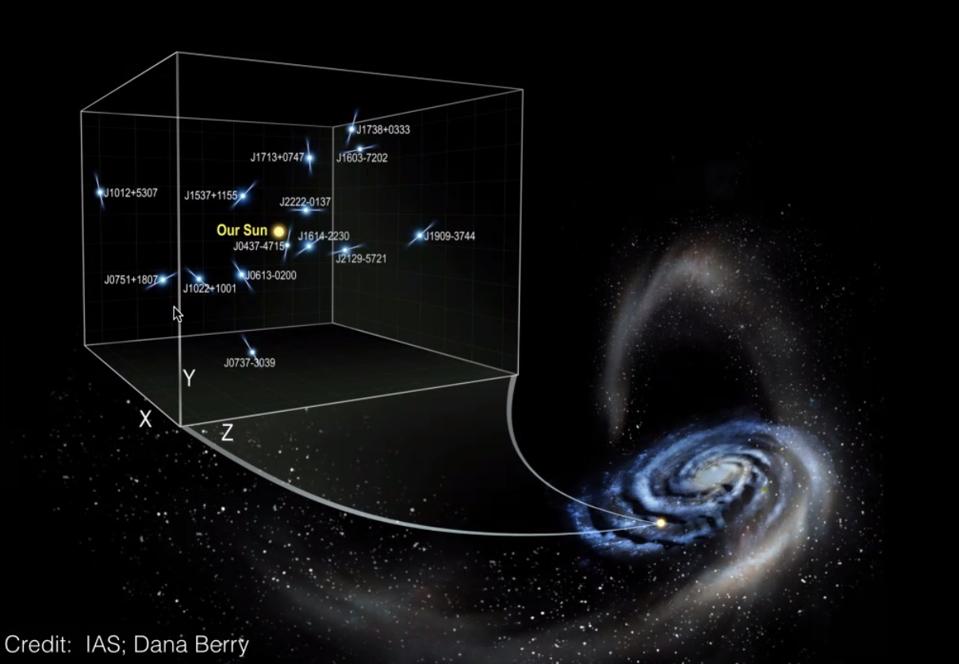 Even though the majority of the matter that makes up our Universe may be completely invisible to our instruments, there’s one way it cannot hide from us: through its gravitational effects. The presence of mass, no matter what type of mass it is, will inevitably curve the fabric of space. That curved space then determines how everything moves through it, from atoms to light to any other particles that may exist within it.

One of the fascinating consequences of this — because it isn’t just space that curves, but the fabric of spacetime itself — is that as masses move around between a distant source and ourselves, the amount of time that it takes light to arrive should shift by very small but measurable amounts. That time difference might be only a few nanoseconds, but a sensitive enough clock should be able to see the difference. Unbelievably, we have a series of natural clocks, binary pulsars, distributed throughout the galaxy (and beyond) that could probe exactly this. In a fascinating new study led by Dr. Sukanya Chakrabarti, we now have the first measurements of dark matter in our own backyard using this method. Here’s what we know so far.

When it comes to understanding what’s in the Universe, dark matter remains one of our most complex and difficult puzzles to solve. One of the biggest problems, of course, is that it’s entirely invisible. It neither absorbs nor emits light. It doesn’t collide or stick together, either with itself or normal matter, in any measurable amount. It doesn’t show up in any detector we’ve ever built or any experiment we’ve ever devised. If there is a signal out there waiting to be discovered, we haven’t robustly extracted it yet.

And yet, the gravitational effects of dark matter have been used by astronomers to indirectly measure its presence and amount that must be present in all sorts of situations across the Universe. Dark matter in galaxies causes the outskirts to rotate at a different rate than the stars’ mass alone predicts. Dark matter in galaxy clusters bends background light sources through gravitational lensing, and causes the individual galaxies within it to move around more quickly than predicted. When those clusters collide, dark matter separates from the normal matter, revealing an independent presence. And dark matter drives the formation of large-scale structure in our Universe, required to explain data from both deep galaxy surveys and the cosmic microwave background.

But what we have very poor data on is the dark matter present within our own galaxy. Being embedded within the plane of the Milky Way makes measurements that we can easily take of other galaxies incredibly challenging here within our own. If you want to estimate how much dark matter there is within our galaxy, the typical procedure is to do the following:

This is what’s known as a kinematical method, because it’s based on the velocities we measure, which in turn allow us to derive an acceleration, which (from F = ma) allows us to calculate the gravitational force.

But are we really doing a good job if this is how we’re calculating dark matter? Not necessarily. It’s very easy to assume that the stars in our galaxy work exactly like the planets in our Solar System do: that there’s a force pointing towards the galactic center accelerating these stars, keeping them in a regular, elliptical path. We assume, in other words, that our galaxy is a galaxy in equilibrium, and that the kinetic energy of each individual star’s motion balances, in a particular way, the gravitational potential energy of the galaxy.

But what if it doesn’t? We know that there are galaxies close by, like the Magellanic Clouds and even Andromeda, that are tugging on our galaxy. The same limitations on our perspective that prevent us from easily measuring all sorts of properties — the number of spiral arms in our galaxy, the presence and extent of our central bar, the total amount of star formation occurring, etc. — also keeps us from knowing whether (and by how much) our galaxy is being gravitationally disrupted. For all we know, we may not be in the exact equilibrium we continue to assume we’re in.

That’s where the incredible science of binary pulsars comes into play. In terms of natural clocks, there’s nothing in the Universe that’s quite as good as a pulsar, and of a specific type of pulsar known as a millisecond pulsar: the fastest-spinning objects known to humanity, rotating at about 70% the speed of light. These pulsars are actually neutron stars with very strong magnetic fields, where the rotational axis of the pulsar itself doesn’t quite line up with the axis of the magnetic field.

The magnetic axis has two or more “poles” to it, and each time one of those poles flashes across your line-of-sight, you see a pulse of electromagnetic radiation. Because these pulsars rotate so regularly, they pulse regularly as well: up to nearly 1000 times per second in the fastest cases. If you watch a millisecond pulsar do its thing, you can literally look away for something like a year, and when you return, you can know whether one billion pulses have occurred or whether it’s one billion and one. We’re that precise.

However, what’s even more interesting is a binary pulsar system, where a pulsar is in a binary orbit with another compact companion. That companion can be a white dwarf, a neutron star, another pulsar, or possibly even a black hole. The arrival time of these pulses is so precise that measuring pulse variations tells us how the system is changing over time, enabling us to measure subtle effects very precisely.

Long before the first gravitational waves were ever detected, we began discovering these truly remarkably systems of binary pulsars. With two compact masses orbiting one another while spinning, there’s a lot going on. The system will orbit their mutual center of mass, moving along our line-of-sight as well as transverse to it, and the orbit will change over time ever so slightly. As they orbit each other, for example, they’re predicted to radiate energy away in the form of gravitational waves at a particular rate. The measurement of this for the first binary pulsar discovered — the Hulse-Taylor binary — was the first indirect confirmation of gravitational waves, whose existence was later confirmed directly by LIGO and other gravitational wave detectors.

As the pulsars spin, the ultra-strong magnetic fields that they possess, which can be trillions of times stronger than Earth’s magnetic field, can create an effect of electromagnetic braking, changing the spin period. However, this effect doesn’t change the pulsar’s orbital period, meaning that if we can measure:

there will be just one component left over: how the gravitational field of the galaxy causes this system to accelerate.

This is subtle, but remarkable. When we measure how quickly individual stars are moving, we can only infer the gravitational effects of the galaxy by making certain assumptions. But, because of the physics at play in these binary pulsar systems, when their orbital period changes, the combination of what the period is as well as how quickly the period changes over time allows us to measure those gravitational effects directly.

In their latest work, the team of researchers led by Dr. Chakrabarti was able to identify 14 binary pulsars located within about 3,000 light-years of our Sun that had the right properties to be useful in figuring this out. What you have to do is measure these pulsars and their orbital periods over long periods of time: many years or even decades, and see not only what those periods are, but how they’re changing.

For the purposes of cosmology — the study of what makes up the Universe and how — this is an incredibly interesting measurement to make. In theory, there are two types of matter:

That’s, in fact, exactly what Chakrabarti’s team found. Making the first robust, direct measurement of the galactic acceleration without assuming the galaxy is in equilibrium, they found that there are about ~750 planet Earths worth of mass in every cubic light year of space: just 0.23% the mass of the Sun. Since we have other ways of measuring how much normal matter is present, we can conclude that between 85%-100% of the matter influencing galactic acceleration in our neighborhood is normal matter, and that dark matter — as predicted — barely has any effects at all.

This is the first time this powerful technique, of using both the orbital periods and the change in orbital periods of binary pulsars, has been leveraged to measure the galactic acceleration of objects in our own neighborhoods. It also marks the first time that, successfully, we’ve measured what the gravitational potential of our own galaxy is without needing to resort to assumptions that may not necessarily be well-founded.

Moreover, and perhaps most excitingly, three big advances should be coming in the near future: longer baselines of time over which these pulsars can be observed, additional binary pulsars that will help reduce the statistical errors in the study, and, with improved instrumentation and techniques, binary pulsars at greater distances. This last one is the most interesting to many, as they’ll either directly reveal our galaxy’s dark matter, or cast significant doubt on our assumptions that a large halo of dark matter actually surrounds our own galaxy. With more and better data on the way, these binary pulsar systems are finally shedding light on the dark matter that’s eluded us for so long.

Listen To Six Alien Planets ‘Singing’ To Us In A Hypnotic Rhythm From 200 Light-Years Away
Hyten: U.S. Space Force is ‘on solid ground’ despite speculation
How It’s Made: Natural Baking Soda
WHO Says Pfizer-BioNTech Covid-19 Vaccine Is Safe For The Elderly After Norway Questioned Its Role In Numerous Deaths
Astronomers detect a surprisingly huge galactic birthplace in the early Universe