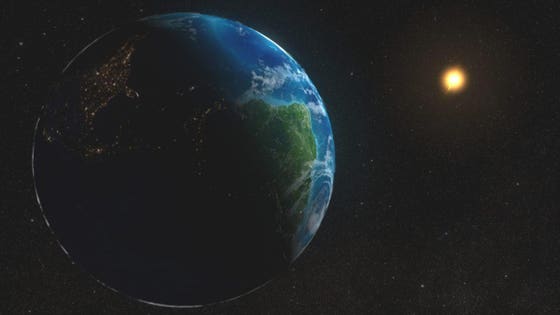 This post is in direct response to a Tweet that I received this morning. The Tweet was in response to a graphic showing relative contributions to Earth’s radiative (heating or cooling) system. In that well-understood chart within the climate science community (this link), greenhouse gases are shown to be the dominant radiative forcing mechanism for Earth’s climate system. The aforementioned Tweet seems to suggests that the sun’s influence is undervalued or that climate scientists mysteriously misunderstand its role. It was worth cutting short my morning workout to debunk this common misconception.

The sun is vital to Earth’s climate system.NASA

The sun is the vital energy source for our planet’s weather and climate system. Without it, things would be very different around here. The sun is hot. We see it and feel its heat. For many people, they understand the concept of sitting next to a fire or heater. The warmth that they feel likely informs their interpretation of how the Earth is warmed by the sun. However, there is far more to the story.

The Greenhouse Effect is very important for earthlings. As Colorado State University Professor Scott Denning says, “we survive night” because of it. What is the Greenhouse Effect? It is an analogy used to describe how the Earth’s surface is heated due to certain things being present in the atmosphere like greenhouse gases, water vapor, aerosols, and clouds. The atmosphere behaves like a very interesting filter. The sun sends energy to Earth at different wavelengths of the electromagnetic spectrum. Thankfully for us, much of the harmful ultraviolet radiation is absorbed by the stratospheric ozone layer. Also thankfully for us, visible light passes through much of the atmosphere. As shortwave energy (visible light and shortwave infrared) reaches the surface of the Earth, it is absorbed.

At this point, we are only halfway through the story. Like almost everything on the planet with a measurable temperature, the Earth’s surface emits longwave infrared (heat) energy back to the atmosphere (graphic above). As an example of this radiative process, there are mornings in which some much heat is radiated away from Earth that the surface cools to the dewpoint temperature. The dewpoint temperature is the point at which the air becomes saturated. When this happens, you might notice fog or dew on the ground.

What happens to the longwave energy emitted from the surface?  Some of it escapes to space, but a significant portion is absorbed by Greenhouse gases or clouds. It doesn’t stop there, however. The gases or clouds emit heat back to the surface or into the atmosphere. This emitted radiation adds to the surface warming from sunlight. This is the Greenhouse Effect in a nutshell. According to the American Meteorological Society’s (AMS) Glossary of Meteorology, “as a result of the greenhouse effect, Earth’s annual mean surface temperature of 15°C is 33°C higher than an equally reflective planet in Earth’s orbit with no atmosphere.” Venus and Mars have very carbon dioxide-rich atmosphere. However, Mars is relatively cold and has frozen surface because its atmosphere is so thin, and there is little water vapor or methane (also Greenhouse gases). Venus, on the other hand, has roughly 154,000 times the carbon dioxide of Earth’s atmosphere and a surface temperature hot enough to melt lead, according to NASA.

The AMS Glossary also makes a point that I routinely share with my students at the University of Georgia:

The term “greenhouse effect“ is something of a misnomer in this context. It is used as an analogy to the trapping of heat by the glass panes of a greenhouse, which let sunlight in. In the atmosphere, however, heat is trapped radiatively, while in an actual greenhouse, heat is mechanically prevented from escaping (via convection) by the glass enclosure.

These processes are very complex, and there is much more to the story than I have written here. I hope this clarifies that “yes” the sun is vital to Earth, but “no” it is not the only part of Earth’s “heating-cooling” system. The energy that the Earth receives from the sun varies, and one of the most significant reasons is the 11-year sunspot cycle. According to a NASA website,

The total solar irradiance (TSI), improperly called “solar constant” until a few years ago, has been found to change about 0.1% in an 11-year solar sunspot activity. The current most accurate TSI values from the Total Irradiance Monitor (TIM) on NASA’s Solar Radiation and Climate Experiment ( SORCE ) is 1360.8 ± 0.5 Watts per meter squared during the 2008 solar minimum as compared to previous estimates of 1365.4 ± 1.3 W/m2 established in the 1990s.

However, these slight changes to the solar constant are not the major driver of temperature trends that we are now observing in the climate system. I hope this information cleared up any misconceptions and brightened your day.

An idea for solving the plastics crisis
Dynetics to use in-space refueling for NASA lunar lander
Raymond: A continuing resolution is problematic for the Space Force
The ARM Nvidia Deal – A View From A Cambridge Founder Who Has Benefitted From ARM’s Success
Oil steady as demand worries revive, crews return to U.S. Gulf rigs