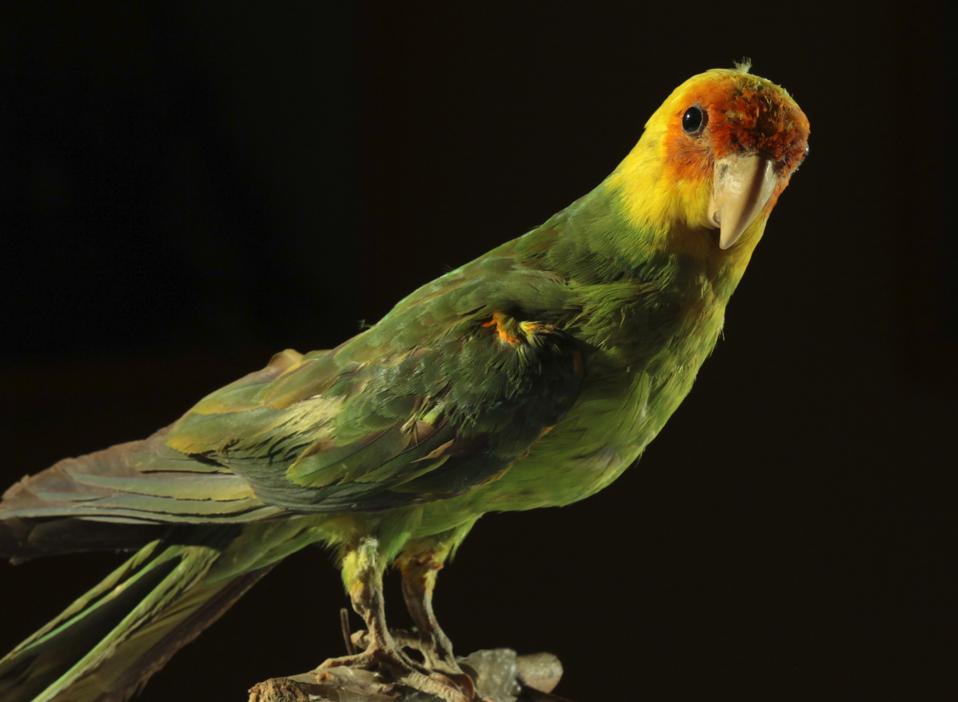 A genomic analysis reveals that the Carolina parakeet disappeared suddenly and abruptly, without any genetic signatures associated with a dwindling population, and thus this species’ extinction is solely attributable to people

Up until 100 years ago, when the last of its kind died in captivity in the Cincinnati Zoo, North America was home to its own endemic species of parrot: the quintessential Carolina parakeet, Conuropsis carolinensis. The Carolina parakeet had the most northerly distribution of any modern parrot species: its range was estimated to extend from eastern Colorado to the Atlantic Ocean, and from the southern half of New York state all the way to the Gulf of Mexico (ref; map).

This small slender-bodied neotropical parrot was emerald green with a bright yellow head and neck, a reddish-orange face and a pale horn-colored beak, and it had a long, pointed tail. The subspecies that lived inland throughout the central portions of the United States could be visually distinguished from its more coastal cousin by the blue tinge that suffused its green plumage.

The Carolina parakeet was bold and gregarious and was often spotted flying around in exuberant flocks numbering hundreds of individuals in lowland old-growth forests, forest edges and canebreaks that sprang up around rivers. Unfortunately, these rowdy parrots became the focus of the destructive tendencies of recently arrived European settlers, who razed their habitat to build cities and farms, and persecuted them mercilessly in retaliation for dining on crops of fruits and grains, as well as to collect their feathers to decorate fashionable ladies’ hats, and who even shot them out of the sky simply for the perverse pleasure of killing something wild and alive and beautiful.

Tragically, only a very few farmers and naturalists ever paid enough attention to these parrots’ habits to know that these birds were uniquely beneficial because of their fondness for cocklebur, Xanthium strumarium. Cocklebur is a widespread plant that produces a poison that is especially toxic to the liver, but Carolina parakeets were the only species known to eat this plant or its seeds without suffering any ill effects. This diet of cockleburs apparently made the Carolina parakeet’s flesh poisonous, according to Audubon.

Surprisingly, despite the widespread destruction of its habitat as well as the extensive slaughter of these parrots, people are still arguing about what finally drove the Carolina parakeet into extinction. Was it due to imported invasive honeybees stealing the parrots’ nest hollows? Or maybe some mysterious unnamed poultry disease wiped them out? Or perhaps the (modest) pet trade was to blame? A few years ago, some authorities recently argued the Carolina parakeet’s extinction was due to a combination of these, and perhaps several other, factors (ref; read more here).

But a new DNA-based study (ref) by a European team of scientists appears to have finally uncovered the smoking gun in the Carolina parakeet’s tragic story. This team sequenced the Carolina parakeet genome obtained from a specimen that was originally collected by Catalan naturalist Marià Masferrer (1856-1923) and is now held by his descendants in a private collection in the Catalonian municipality of Espinelves. After analyzing this parrot’s genome, the researchers concluded that the Carolina parakeet disappeared suddenly and abruptly – which is consistent with reports of people who made it their obsession to shoot these colorful birds out of existence.

This project got started after Pere Renom, who was a PhD student at the Institute of Evolutionary Biology (IBE), a joint institute of Pompeu Fabra University and the Spanish National Research Council, and a science reporter associated with the popular Catalan science program, “Quèquicom”, discovered there is one specimen of the extinct Carolina parakeet held in a private collection in Catalonia. He became convinced that the process of recovering ancient DNA from this specimen with the potential goal of using that DNA for “de-extinction” would make for compelling public television viewing. (Mr. Renom was correct: this episode, “Desextinció: reviure una espècie”, was recently awarded the Spanish Prisma prize as the best video of scientific dissemination of 2019. Even if you don’t speak Spanish, it’s definitely worth watching.)

“Renom contacted me asking if I would be interested in trying to retrieve DNA from the specimen”, said paleogeneticist Carles Lalueza-Fox, a research scientist with the IBE and an authority on recovering and analyzing ancient DNA.

This launched a scientific ‘the Dream Team’ of ancient DNA experts that collaborated to study this iconic parrot. Professor Lalueza-Fox was joined by evolutionary biologist and palaeogeneticist M. Thomas P. Gilbert, a professor at the University of Copenhagen’s prestigious Centre for Geogenetics, which is a world leader in ancient DNA research. Professor Lalueza-Fox and Professor Gilbert assembled a team of collaborators to help recover and reconstruct the first complete genome of the extinct Carolina parakeet, to analyze that data to investigate the species’ evolutionary history and to identify the potential cause of its extinction.

Because mummified tissue is a poor source of ancient DNA, the team x-rayed the Espinelves specimen to see how it was prepared and to identify bones from where they might obtain a useable sample. The x-rays revealed that the specimen had very few bones — but fortunately, it did still have its left leg (femur) bone. They used a small bone drill to collect a tiny sample of powdered bone tissue from the femur, and they also collected a small tissue sample from a toe pad.

At the same time, genomic DNA was obtained from a blood sample from a captive-bred female sun parakeet, Aratinga solstitialis, which is a close genetic relative. It had been previously shown that Carolina and sun parakeets shared a common ancestor around 3 million years ago and both species have about 1,000 genes each. Thus, the sun parakeet and the Carolina parakeet genomes are very similar, so the sun parakeet genome served as reference for computer mapping the ancient DNA fragments obtained from the Espinelves Carolina parakeet specimen. In total, more than 1,100 million base pairs — a little more than one gigabyte — were recovered from the Espinelves specimen and re-assembled.

The Carolina parakeet’s evolution was influenced by geographic events

Molecular clock analysis of nuclear genomic sequence data suggests that the Aratinga–Conuropsis split occurred around 2.8 million years ago (mya) and mtDNA data estimated this split to be around 3.8 mya. Both dates roughly coincide with the estimated final closure of the Panama Isthmus, which is widely accepted as having occurred 3 mya (ref). Thus, it seems plausible that the dispersal of the Carolina parakeet’s ancestors to North America occurred after the North and South American landmasses were joined together.

Genomic analysis revealed that the Carolina parakeet experienced an increase in its population size during the Middle Pleistocene, followed by population fluctuations that started during the Last Glacial Period (which began around 110,000 years ago and ended about 15,000 years ago), and a subsequent population decline that continued until recent times. In contrast, the endangered sun parakeet showed a stronger, continuous population decline and a longer period of lower effective population size than the Carolina parakeet.

Professor Lalueza-Fox, Professor Gilbert and their collaborators then profiled the overall heterozygosity across the genome and the distribution of long runs of homozygosity (RoHs) for both Carolina and sun parakeets. These measures provide glimpses into the nature of these parrots’ demographic histories. Heterozygosity is a measure of overall genetic diversity, whereas RoHs occur when identical chromosomal fragments are inherited from a recent common ancestor. Significantly reduced heterozygosity is typical of populations that have been small and isolated for long periods, whereas elevated RoHs are usually observed in inbred populations (ref). Thus, reductions in both measures may be seen in the genomes of endangered species.

Professor Lalueza-Fox, Professor Gilbert and their collaborators found that the extinct Carolina parakeet had as much genetic diversity as many birds alive today that are classified by the IUCN as “least concern” (Figure 3). By comparison, the endangered sun parakeet had a much lower level of heterozygosity — which could result from being a captive-bred bird. (The sun parakeet has been captive-bred by Spanish aviculturists for many years.)

I know this is what you’ve all been sitting on the edge of your seats waiting for: the answer to the question of how the Carolina parakeet could eat poisonous cockleburs without dropping dead.

Although Carolina parakeets consumed a variety of fruits and seeds as well as some flowers and buds, it apparently had a fondness for cockleburs. For example, a collection of 99 feeding observations of Carolina parakeets showed that the highest observed plant intake (N = 17) was cockleburs (ref).

Cockleburs contain a highly toxic diterpene glycoside, carboxyatractyloside or CAT, that specifically inhibits any of the four mitochondrial transporters, ADP/ATP translocase (ANT1, ANT2, ANT3, and ANT4; encoded by SLC25A4, SLC25A5, SLC25A6, and SLC25A31, respectively), which play a fundamental role in cellular energy production. To determine whether any or all of the four mitochondrial transporters had molecular changes that prevented CAT from binding and thereby inhibiting them, Professor Lalueza-Fox, Professor Gilbert and their collaborators explored these genes further by comparing their sequences against those from the same genes in other species (orthologs) (Figure 4).

Professor Lalueza-Fox, Professor Gilbert and their collaborators found that two of the four mitochondrial transporter genes from the Carolina parakeet have two amino acid changes with respect to the same genes in the sun parakeet. These two sites probably influence the functionality of both proteins. Therefore, it appears that these mutations conferred a unique mechanism for dealing with the toxic CAT present in the Carolina parakeet diet.

Two years later, the ancient DNA ‘Dream Team’ announced that as the result of sequencing and analyzing the entire genome of two closely related neotropical parrots, they had uncovered the smoking gun in the Carolina parakeet extinction tragedy.

First, based on their analysis of the Carolina parakeet’s genome, they found a level of genetic diversity that is comparable to other extant populations of birds that are not endangered. This indicates that these iconic parrots experienced an “abrupt extinction process that left no marks in the parakeet genome”.

“We are not pointing to a specific cause,” Professor Lalueza-Fox cautioned in email, “but to the fact that there are no signs of long term demographic declines in their genome; many endangered species experience population reductions during thousands or even tens of thousands of years and this can be seen at the genomic level in its diversity.”

“[I]n fact we don’t have just one genome in our cells, but two, one from each parent, and they are not identical; the larger the population, the more likely both chromosomal copies are different,” Professor Lalueza-Fox elaborated in email.

“We can use genomics to test the dynamics of other extinction processes and infer if they are entirely caused by humans, because long-term demographic declines leave specific signals in the genomes of the species,” Professor Lalueza-Fox explained in email. “The lack of signs of small population sizes for a long period of time indicates its extinction was an abrupt process and this makes more likely it was human-mediated.”

As an added bonus, Professor Lalueza-Fox, Professor Gilbert and their collaborators also found molecular evidence to suggest how the Carolina parakeet could eat deadly cockleburs with impunity. At this point, the final piece of evidence for this discovery can be provided by functional tests of the two genetic variants detected in the mitochondrial SLC25A4 and SLC25A5 genes using avian cell lines. But those studies are not yet being planned.

“Extinct species still have many lessons to teach us about their fascinating evolutionary histories and specific adaptations,” Professor Lalueza-Fox concluded in email. “Now that there are ambitious projects directed to sequence the genomes of the living world, I think it is a kind of moral duty to restore this information to the emerging genetic tree of life.”