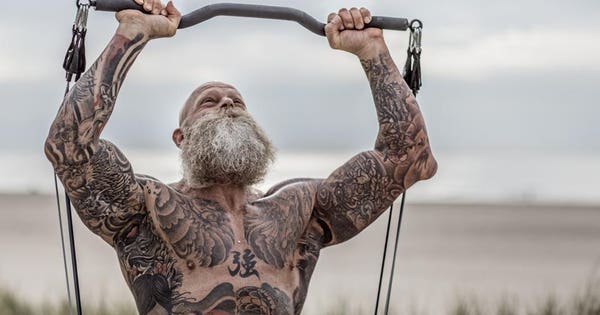 Do you even lift? According to urbandictionary.com, it’s a condescending expression used on body building and fitness forums to question the legitimacy of someone’s fitness expertise or weight lifting routine. But if we’re paying attention to the research, maybe it’s a question we should be asking older adults and everyone for that matter.  And this is no Bro Science.

A former powerlifter and biologist says exercise, and in particular strength training, is “absolutely critical” for people as they age. And he says the science backs it up. Watching his own parents and his wife’s grandparents age led Nicholas Rizzo to spend hours upon hours researching over 200 scientifically backed, peer-reviewed studies, 126 of which he used as evidence for a list he created of the benefits of weight lifting for older adults.

Despite the evidence, Rizzo says some 80% of adults are not engaging in enough physical activity to reach prescribed guidelines—a choice that he says is “extremely dangerous” and puts them at “increased risk of serious adverse health conditions such as blood pressure, heart disease, stroke, obesity, cholesterol issues, metabolic syndrome, diabetes, cancer, depression and death from any cause.”

And many times, the physical activities older adults are engaging in, aren’t enough. “Many people know weightlifting is hugely beneficial but think light walking or recreational activity is ‘good enough’ for seniors,” he said. “There is this misconception that older aged individuals should stay away from any strenuous activity that can build strength like weightlifting. Unfortunately, this couldn’t be further from the truth.”

Rizzo also points to data analyzed from the National Health Interview Survey (NHIS) linked to death certificate data in the National Death Index to support his claim that seniors need more exercise, and particularly weight lifting, to age well.  The data revealed that adults 65 years and older who strength trained twice a week had a 46% lower mortality rate and that strength training reduces all causes of death, including cancer and cardiac death.

“Now when I first read that statistic, I tried to be critical and think about all the other factors that could account for differences that are so drastic,” said Rizzo, head training and fitness researcher and content director for RunRepeat.com, who uses his background in the sciences and his passion for writing to create research-backed articles to help others make informed decisions about and positive changes in their lives. “The scientist in me wanted to prove it wrong. Thankfully, the scientists who did the study were way ahead of us and did this already. They went through and accounted for all other potential factors from diet, genetic predispositions, accidents, falls and more.”

The bad news, according to researchers, is that only a minority of older adults meet current strength training guidelines.

With a biology degree, personal strength training experience and a background of research in a variety of areas at Emmanuel College, Harvard Medical School and Brigham & Women’s Hospital, Rizzo is trying to change that by providing older adults with the latest research on staying strong as we age. “I spent much of my life as a competitive power lifter, and I thoroughly enjoyed learning about how the act of lifting impacted the body on a molecular level in order to better inform my regiment to maximize performance,” he said. “With these two backgrounds, I get to delve into extremely valuable areas that deserve more conversation.”

Rizzo started the conversation with his own parents after the couple entered their sixties. The experience, along with caring for his wife’s grandparents, led him to create an article outlining “78 Science-Backed Benefits Of Weightlifting For Seniors.” The article comes complete with a “Works Cited” page so readers can study the corresponding research themselves.

It was important to Rizzo that he gather science-backed information, because the first people he would be sharing it with were his mom and dad. “My parents entered their sixties recently. The past year my wife and I have been helping take care of her grandparents who are starting to enter their mid-eighties,” Rizzo said. “Even though they have been relatively active, engaged and fully functioning for the 8 years I have had the pleasure of calling them family, things have started to change recently—and change rapidly. Their conditions began to deteriorate quite rapidly.”

Watching this aging process in his grandparents-in-law, he realized that there really isn’t a great deal of time between where his parents are now and where his wife’s grandparents are. “With my own child on the way and just because they are my parents, I want them to live long, healthy and fully engaged lives. I wanted to show in as much detail and with as much science as possible that weightlifting is one really great option for all of us to counteract the negative aspects of the aging process.”

And living longer, healthier and happier is attainable for everyone, says Rizzo. “The science speaks for itself. Weightlifting has been shown in study after study to help improve all of these categories and more. Plus, it is something that everyone at every age can easily start with whatever they are comfortable with and slowly but continually improve.”

So just how important is strength training to the aging adult? “It is a 46% lower odd of all-cause mortality important,” Rizzo said. “It helps to keep the complex biological machinery that we are running at its fullest capacity, effectively and smoothly.”

And if exercise is heads then diet is tails, Rizzo said. “By themselves they can drastically improve our health and wellbeing, and together they only amplify one another’s benefits. I think about it this way. Imagine the human body is a car. We feed our car with gas and oil to provide the ‘nutrients’ it requires to work. If the gas you put in the car is poor, contaminated or ‘watered-down,’ then the car will not run as effectively, although it can still run. The same thing can be said about the oil. Now, all of that is great, but if the car is never turned on and driven, then it will start to slowly but surely break down. If the gas and oil are not the best but we are still taking the car out for a ride it can still continue to work. If the car is driven a healthy amount and provided the best materials needed to run, you are more likely to enjoy that vehicle for much longer with a whole lot less issues.”

In his article, Rizzo outlines the benefits of weightlifting, backed by studies in each of the following categories, on:

He said beginning a strength training program “is as simple as doing body weight exercises right now. Through slow, consistent progression, you can graduate to using weights and increasing those weights over time.” He recommends talking with your doctor first, and then reaching out to a certified personal trainer in your area or at the very least taking the time and effort to learn how to best workout on your own.

“The aging process is something that none of us can escape,” Rizzo said. “It can be a rather scary thought but it doesn’t have to be if we start acting now, no matter what our age, to prepare. By starting to include weightlifting into your lifestyle, you will experience inherent benefits right now, whether your 15, 35, 55 or 85. The point is, the earlier we start the better.”

Studies have shown that those who have been lifting as a part of their lifestyle for some time were protected against all sorts of age-related declines in health including neuromuscular functioning, sarcopenia, muscle force-generating capacity, overall functional capability and performance, cognitive functioning and mitochondrial impairment, Rizzo said.

“I experienced watching a loved one slowly being to struggle. Into their 80’s they were driving their car, maintaining the yard, cooking on Sundays for a family lunch, and even once sneaking over to their children’s house when they thought no one was home to test out the new rider lawn mower,” he said. But slowly, over time, their ability to do these and other activities declined substantially.

“Now, I am not saying weightlifting is the miracle cure that would have prevented all of this in this case,” he said. “What I am saying is that the science shows that by lifting weights regularly we can maintain functional independence, reduce fall risk factors, and maintain and even build muscle and strength. For anyone, this will push off that period of decline for as long as possible to enjoy a greater quality of life.”

According to the data, Rizzo said, regular lifting twice a week in a way that builds strength can reduce odds of all-cause mortality rates by 46%. “This 46% was concluded on after they went through all of the data and accounted for all potential causes,” he said. “Therefore, it has the ability to help us live longer, to spend more time with family, to experience milestone events in the lives of relatives, grandkids, the birth of a great-grandchild and be present to enjoy them—more of the moments that make life worth living.”