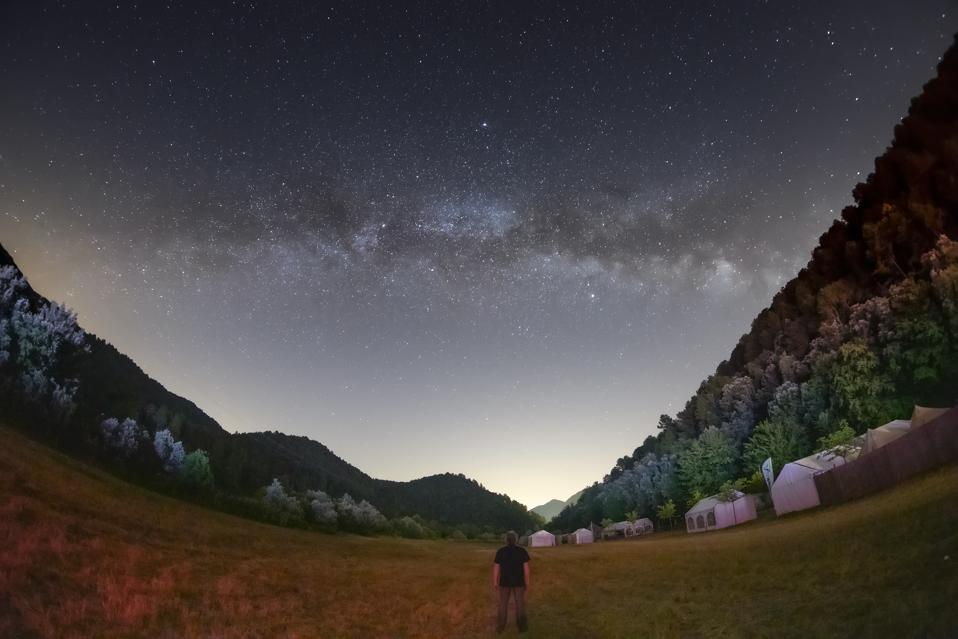 Some of the natural highlights of our night sky are easy to overlook. Every year, you’ll hear about some of the brightest, major events that occur, including:

all of which are spectacular and worth a look up into the heavens. Right now, Comet NEOWISE is still visible with binoculars, Jupiter and Saturn brightly grace the post-sunset skies, Venus is brilliant in the east before dawn, and the peak of the Perseid meteor shower — arguably the year’s best — arrives on August 12/13.

But if you’re going to go spend some time outside, looking up, gazing at the stars, you should know that throughout the months of June, July, August and September, there’s a brilliant collection of deep-sky objects just waiting for you to turn a telescope or binoculars loose on them. Even from modestly light-polluted skies, even if the Moon is out, you can still enjoy these seven spectacular sights all summer long. Here’s where to look.

Once the Sun goes down, the planets and the brightest stars are the first to come out. If you look directly overhead from mid-northern latitudes, you’ll be greeted by three of the brightest stars of all, making an enormous triangle in the sky: Vega (the 5th brightest), Altair (the 12th brightest), and Deneb (the 19th brightest). Skywatchers know this collection of stars as the Summer Triangle, and the plane of the Milky Way galaxy passes right through it.

It’s also chock full of spectacular sights, even with relatively primitive astronomical equipment. Any modern telescope or even a pair of tripod-mounted binoculars can reveal the seven spectacular views labeled above, so long as you know precisely where to look. While automated (or Go-To) telescopes can find these sights for you without you explicitly locating them yourself, part of the joy of looking through a telescope yourself is the thrill of finding a sought-after object all on your own.

Here’s the perfect collection of objects to look for — whether you’re also looking for meteors, planets, or comets — relevant to summer skywatchers everywhere.

1.) Albireo. Halfway between Vega and Altair, just slightly closer to Deneb than the imaginary line between the two, lies the bottom of the six-star collections known as the Northern Cross: Albireo. This naked-eye star, even through binoculars, reveals itself as a spectacular binary system, spectacular because it hits the trifecta of:

This pair of binary stars are so well-separated that it takes a whopping 75,000 years for them to complete one orbit around each other: 300 times longer than Pluto’s orbital period around the Sun. The yellow star is cooler than our Sun, at about 4,200 K, while the blue component is much hotter, reaching temperatures of around 13,000 K. Through a telescope, you can really gain an appreciation for how varied each individual point of light in the night sky can be.

2.) Globular cluster Messier 56. If you look near Vega, you’ll see a parallelogram of four stars, which compose (along with Vega) the constellation of Lyra: the lyre. The farthest member of the parallelogram from Vega, Sulafat, is also the closest star in Lyra to Albireo, and the invisible line between Albireo and Sulafat is what you want to focus on next. If you go about 40% of the way from Albireo to Sulafat and point your telescope there, you’ll find an enormous “ball” of stars: that’s the globular cluster Messier 56.

On an astronomical scale, this is an incredible collection of stars. In a volume just 42 light-years in radius, there are literally hundreds of thousands of stars in there: more than 100 times the number of stars within 42 light-years of the Sun. Remarkably, this is one of the least compact globular clusters in the Milky Way: they’re ranked on a “compactness” scale from Class I to Class XII, and Messier 56 is a Class X globular cluster. These collections of stars were formed many billions of years before the Sun was, and still persist even to the present day.

3.) The Ring Nebula. Also known as Messier 57, you can find this stellar remnant by looking on the other side of Sulafat, mid-way between it and the other bright member of Lyra’s parallelogram: Sheliak. With a very small telescope, you can still see the ring-like feature, though it will likely appear either monochrome (white) or greenish to the naked eye. It’s one of the brightest planetary nebulae in the night sky, formed when Sun-like stars, having burned through their core’s helium fuel in the red giant phase, blow off their outer layers and contract down to a white dwarf.

A variety of elements are returned to the interstellar medium in this process, including hydrogen, helium, carbon, oxygen, and nitrogen. The majority of carbon and nitrogen in the Universe — elements essential for life as we know it — come from dying Sun-like stars just like this one. This planetary nebula is relatively young, estimated to be just ~1600 years old. It’s one of the night sky’s greatest examples of what our Sun might look like in the distant future, and it’s visible all summer long.

4.) Open star cluster Messier 29. Some of the star clusters in our galaxy are globular clusters: ancient balls of stars that have survived in the halo of the Milky Way for billions of years. Others are open star clusters, which form from collapsing clouds of gas in our galactic plane, and are usually destroyed after less than 1 billion years. To find Messier 29, head to the “crux” star of the Northern Cross, Sadr, and move a little less than 2 degrees along the imaginary line connecting Deneb and Altair (towards Altair). Even through a pair of binoculars, this cluster of stars should be unmistakable.

What you’re seeing is a group of newborn, baby stars still living in their dusty stellar nursery. In fact, the stars of Messier 29 are being obscured by some of this nebulous dust; the cluster would appear even brighter if the dust were all evaporated away, but not enough time has passed for the radiation to do so. The stars in this cluster are only about 10 million years old: just 0.2% the age of our Sun. There are only around 1,000 stars in here, but they shine with the brightness of 160,000 Suns. Enjoy the view for yourself.

5.) Globular cluster Messier 71. We’ve looked at objects near Vega and Deneb, and now it’s time to head over to the third vertex of the Summer Triangle: Altair. If you look inside the triangle by Altair, you’ll find a “row” of four stars, where one end has a bright double star and the other end has a star that’s much fainter than the other three. Well, directly between those two central stars, Gamma Sagittae and Delta Sagittae, just slightly closer to Gamma Sagittae and a little bit back towards Altair, is an unmistakable collection of stars tightly clustered together. That’s the globular cluster Messier 71.

It’s an object that puzzled astronomers for centuries: was it a very dense, distant, bright, and old open star cluster? Or was it a very diffuse, close, faint, and young globular star cluster? In the 1970s, we finally determined that it was a globular cluster, but one hidden behind a portion of the galactic plane! It’s about 9 billion years old, even more diffuse (at Class XI) than Messier 56, and without a bright, notable core. It’s only 27 light-years in diameter, but is an impressive 13,000 light-years away. Once you’ve found Messier 71, it’s only a short hop to the next object.

6.) The Dumbbell Nebula. The only planetary nebula that’s brighter than the Ring Nebula as seen from Earth, it’s the very first planetary nebula ever discovered, but much older than the Ring Nebula at nearly 10,000 years of age. To find it, follow that “line” of four stars up to the faintest one — Eta Sagittae — and then make a 90 turn to the right. Head in that direction just another 2 or 3 degrees, and you’ll find the Dumbbell Nebula, an object first discovered by Charles Messier in 1764.

Unlike most planetary nebulae, its color differences can be seen even in small telescopes, as it contains a diffuse spheroidal shape with a “double-wedge” shape in a different color, as though someone is well on their way to winning a cosmic game of Trivial Pursuit. Through a larger telescope, you can identify the central white dwarf, larger than most known white dwarfs and possibly still in the process of forming. Under dark skies, the view is truly spectacular.

And finally, take a journey to the last of the seven sights of the Summer Triangle.

7.) The Coat-Hanger Cluster. Is that really what astronomers call it? While many call it Brocchi’s cluster, it’s actually visible under extremely dark skies to the naked eye, and was first described all the way back in the year 964 (that is not a typo!) by the Persian astronomer Al Sufi, and hence is sometimes known as Al Sufi’s cluster. It’s not actually a cluster at all, but a chance alignment of 10 different stars, all in the same location of the night sky. And it very, very much looks like a hanger for your coat.

To find it, start at Altair and follow the imaginary line that connects it to Vega. Go past that four-star line you used to find Messier 71 and the Dumbbell Nebula, until you’re about a third of the way towards Vega. (But well before you get close to Albireo!) At precisely that third-of-the-way there mark, you should be able to spot the cosmic coat hanger. After seeing it for myself, I don’t think I’ll ever see any other shape from that collection of stars.

The summer skies are there every years to offer us a respite from the hardship of our daily lives, and during the COVID-19 pandemic, they remain one of the few sights that almost all of us still have some opportunity to take in. On a clear night, overhead, an enormous but brilliant collections of stars known as the Summer Triangle dominates the skies this month. If you head outside and attempt to view any of the transient sights out there — the Moon, Comet NEOWISE, the planets, the meteor shower, etc. — take some time and enjoy these deep-sky objects, too.

The night sky is always out there for anyone curious to explore it. Even with the ever-increasing number of satellites and the (sometimes severe) light-pollution that we all must reckon with, these natural wonders are just as intrinsically spectacular as they’ve ever been. Turn your telescope or binoculars up at any or all of these seven objects, and you’ll be looking years, centuries, or even millennia back in time, from giant collections of stars to a preview of our own Sun’s death. The Universe, when you see it for yourself, never disappoints.

Ice bathes Pluto in a blue haze
Daily briefing: Short-statured giraffes surprise scientists
Signal and Telegram downloads surge after WhatsApp says it will share data with Facebook
It’s A Big Year For The Solar System. Here’s When You Can See Saturn, Jupiter, Mars And Venus With Naked Eyes
This breathtaking close-up of Mars’ ‘grand canyon’ is giving us goosebumps