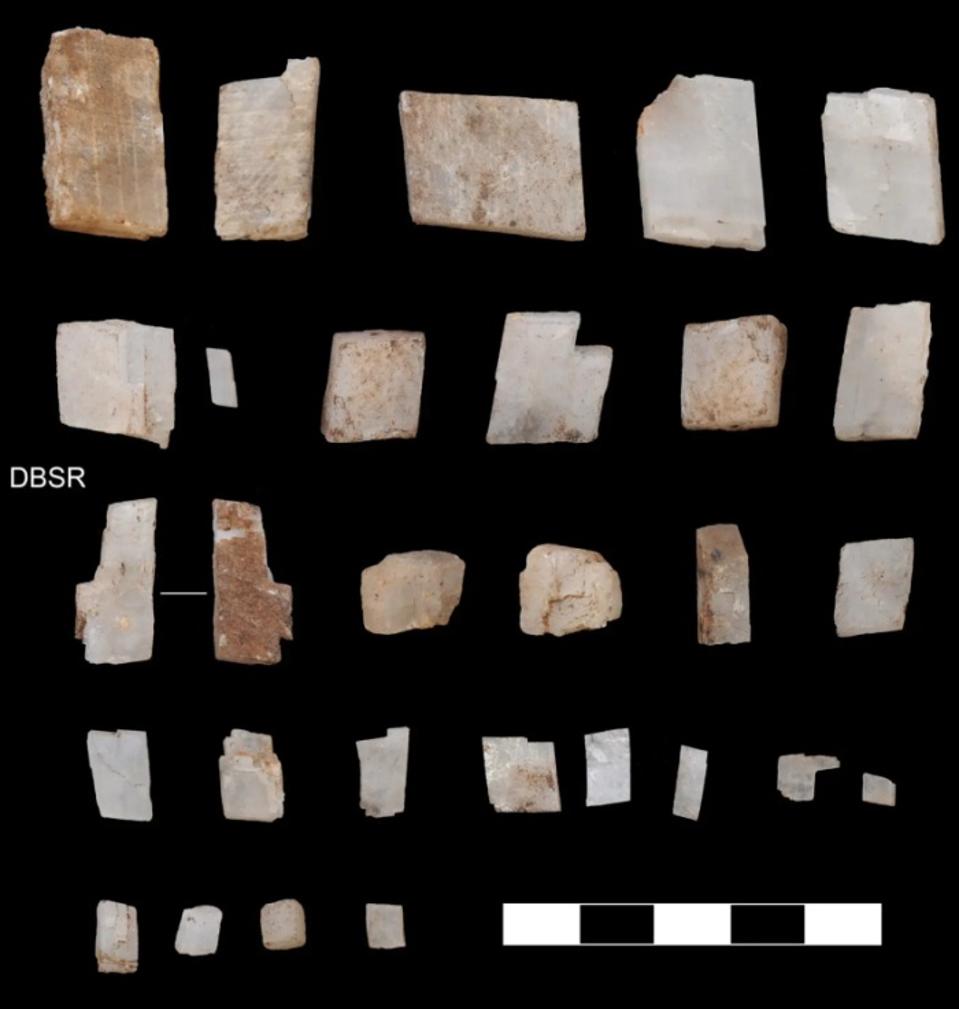 The name Kalahari is derived from the Tswana word Kgala, meaning ‘great thirst’. And today the climate at Ga-Mohana, a rock-shelter site in the Kalahari Desert, South Africa, is semi-arid, with little, very seasonal rainfall. However, ancient proof of abundant water on the landscape is evident from the abundant tufa formations (a variety of limestone formed when carbonate minerals precipitate out of water) and fossil lake sediments.

Used as a place of spiritual activities today by some of the local community, archaeological research in the rock-shelter has revealed a long history as a place of spiritual significance. An international team of scientists excavated the site, discovering evidence on the earliest human presence in the interior of southern Africa.

The researchers excavated 22 white calcite crystals and fragments of ostrich eggshell from deposits dated to 105,000 years ago when the environment was much wetter than today. Dating directly the sediments, the researchers were delighted to discover that the assemblage of human-collected crystals and ostrich eggshell fragments at Ga-Mohana were significantly older than that reported in interior environments elsewhere.

Ostrich eggshells are still used today as water storage containers. Buried in the cool sand or deposited in the shadow of a rock-shelter they can preserve drinking water for months. The fragments found at Ga-Mohana may be the remains of early containers. More intriguing are the crystals found in the same sediments.

“Our analysis indicates that the crystals were not introduced into the deposits via natural processes, but were deliberately collected objects likely linked to spiritual beliefs and ritual,” lead author of the study Dr Jayne Wilkins explains.

“The crystals point towards spiritual or cultural use of the shelter 105,000 years ago,” said Dr Sechaba Maape from the University of the Witwatersrand. “This is remarkable considering that site continues to be used to practice ritual activities today.”

We Homo sapiens first emerged in Africa about 300,000 years ago. Archaeological evidence for early humans has been largely discovered at coastal sites in South Africa, supporting the idea that our origins were linked to coastal environments. But Ga-Mohana, and other datable archaeological sites, shows that the interior of southern Africa also played a role in human innovation.

Even if the exact use and significance of the crystals deposited in the rock-shelter remains unknown, objects like seashells, fossils and minerals across the planet and from several time periods have previously been linked to humans’ spiritual belief and ritual. For example, some cultures explained semitransparent crystals, like rock crystals, as a form of petrified water. Maybe the calcite crystals had a similar connection to water.

Ga-Mohana is still today a site for ritual practices dedicated to Nnoga ya metsi, the Great Water Snake, a spirit of great power associated with water. Respecting the spiritual significance of the site, the researchers limited their stay, leaving no visible traces following each excavation season and involving the local community in the research.