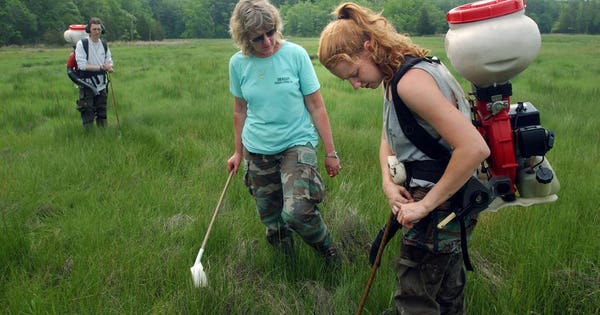 Its acronym is appropriately EEE. Because, “eeeee”, Eastern equine encephalitis (EEE) is something that you don’t want to get.

According to a recent announcement from the Michigan Department of Health and Human Services (MDHHS), an Allegan County, Michigan, resident developed EEE and was hospitalized in late August with neurological problems. EEE is caused by EEEV, the Eastern equine encephalitis virus (EEEV), which is an alphavirus. Some people want to be an alpha, but no one should want this alphavirus.

Additionally, according to Fiza Pirani reporting for the Atlanta Journal Consitution, the DeKalb County Health Department in Georgia announced this past week that a mosquito had tested positive for EEEV.

Yes, EEEV is yet another virus that can be carried by “skeeters.” They ain’t considered the world’s deadliest animal for nothing. Culiseta melanura is the main mosquito that carries EEEV. Currently though, Cs. melanura tend to focus their biting on birds. However, other mosquitoes such as Aedes, Coquillettidia, and Culex species can subsequently feed on infected birds and then bite mammals. And you are a mammal.

What’s another mammal that can get EEE? A horse, of course. That’s why it’s called an “equine” virus and disease. Horses can die from EEE. But don’t worry about getting EEE from a horse, because once a horse gets infected, the horse is unlikely to pass the virus on to others because their blood concentrations of the virus usually are too low.

Once you are bitten by a mosquito with EEEV, it takes about 4 to 10 days for you to become ill. You may never develop any symptoms. If you do develop symptoms, one possibility is a systemic illness. You can get a fever, chills, joint pains, muscle pains, and general weakness for 1 to 2 weeks. This isn’t EEE and doesn’t affect your brain. Why you may feel like poop for a little while, you will recover completely.

When the EEEV does affect the central nervous system, EEE can result, which occurs in about 4 to 5% of all infections. Encephalitis means brain inflammation. Remember “enceph-” means brain and “-itis” means inflamed. For example, if you want to say “I have a very good brain” you could make up a word and say “I am encephalo-tastic.”

When your brain is inflamed, it can start to malfunction. In addition to a fever and diarrhea from the infection, you can get headaches, become irritable and restless, get drowsy, lose your appetite, vomit, have convulsions, or fall into a coma. Your chances of death are about 33%, which are not good odds. This can occur quickly, as soon as 2 days after symptoms start but may take longer. Even if you recover, you can be left with permanent damage such as severe intellectual impairment, personality disorders, seizures, paralysis, or other nervous system problems. These permanent problems can be so bad that they can eventually result in death in a few years as well.

Here is one person’s experience with EEE:

Anything that feels like a corkscrew in your body is not good.

Here’s more good news. There is no vaccine to prevent EEEV infection, unless you are a horse, of course. There is also no specific treatment for EEE in humans. The only thing that you can do is try supportive care and manage the symptoms.

Fortunately, EEE is fairly rare. As the Centers for Disease Control and Prevention (CDC) indicates, each year there are only an average of 7 reported human cases of EEE. Most of these cases have been in Florida, Massachusetts, New York, and North Carolina with transmission occurring near freshwater hardwood swamps.

The steps to avoid EEEV are the same steps you should take to avoid other mosquito-borne illnesses. Use mosquito repellent approved by the Envirnomental Protection Agency (EPA). Wear long sleeves and long pants if you may be exposed to mosquitoes. No gardening or swamp fishing in your thong. Get rid of standing and stagnant water around you. Mosquitoes can be cheap dates. Some need only a bottle cap of water to breed. Wear light-colored clothing so that you can see the skeeters. Advocate for and support better mosquito control. And don’t party with mosquitoes.

As I’ve said before, mosquitoes bite and suck. EEEV is not common, but add this to the long list of reasons why better mosquito control is so important.