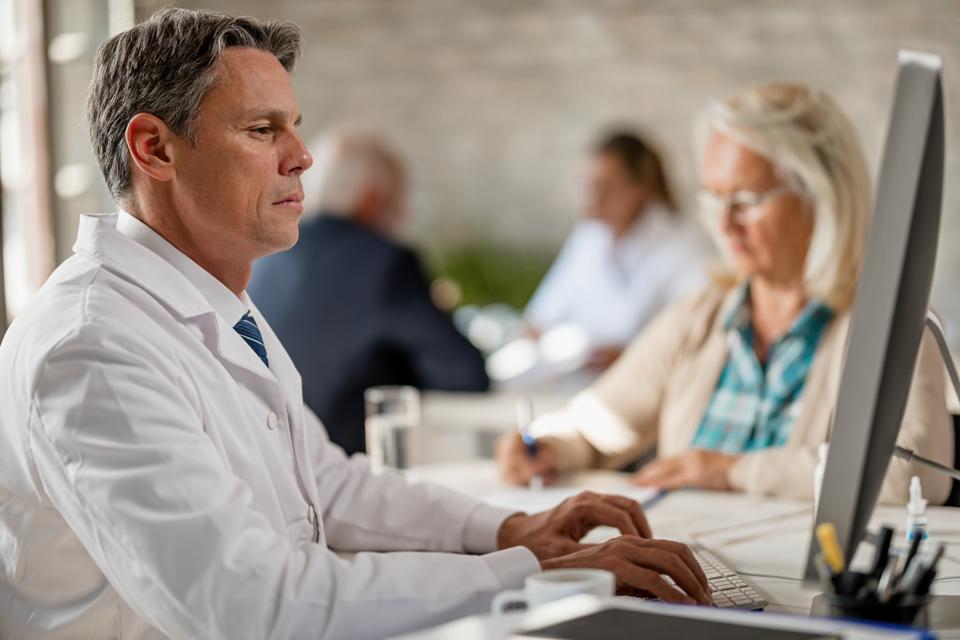 Your doctor may be spending more time with your electronic health record (EHR) than with you.

A study published in the Annals of Internal Medicine found that on average a physician spent 16 minutes and 14 seconds using the EHR for each patient that he or she saw. That’s great news for those who wrote in their medical school applications that they wanted to become physicians so that they can see EHRs. After all, this average time is one minute and 14 seconds longer than your typical 15-minute patient appointment slot.

The study was an analysis of data from EHR software log files. Whenever you log onto an EHR, you ain’t alone. Someone or something is watching you. Software log files can track what you are doing and how much time you spend on different functions. It can also help determine when you are simply logged on to the EHR versus when you are “actively” using it, based on things like mouse clicks and keystrokes. So if you want the software log file to think that you are doing lots of work, just keep clicking your mouse wildly in the EHR.

For the study, J. Marc Overhage, MD, PhD, and David McCallie Jr., MD, both of the Cerner Corporation, which makes widely-used EHR systems, extracted data from the Cerner Lights On Network software log files for about 155,000 physicians during their 100 million or so patient encounters in 2018. These docs were all in non-surgical specialties, such as internal medicine, cardiology, and physical medicine and rehabilitation, and based at 417 different health systems throughout the U.S.

The analysis found that physicians on average had spend 16 minutes and 14 seconds of active time on the EHR per patient encounter. Again, this was time that they were actively moving around the mouse and typing on the keyboard and not just logged on to the patient’s medical record. The tasks that constituted a majority of the active time fell into three categories: “chart review,” (which was 33% of the time), “documentation” (24%), and “ordering” (17%).

Now these are all fairly general categories. “Chart review” simply means that the doctor is looking through the electronic medical record for some reason. It doesn’t specify how much time he or she is looking at medical information versus viewing other types of patient information like administrative info versus clicking through the record, wondering “where the bleep do I find such-and-such.”

In the same vein, “ordering” can also encompass lots of different activities. It can be ordering lab tests or procedures, entering prescriptions, or referring the patient to another health professional. Ordering can range from a quick click to having to enter extensive information such as “we’ve tried all the cheaper stuff already, that’s why the patient needs something more costly that actually works.”

Plus, this study may actually underestimate the amount of time spent navigating through the EHR. Remember that the 16-plus minutes is only so-called “active time.” When you are using a computer, unless you continuously shake the mouse or rub it on your forehead, you can still be “using” and looking through the EHR without it registering on the software log as “active time.” Not everyone is Terminator-efficient at using an EHR. “Active time” may not include “where is that stupid button” time or “I am going to hit my head on the computer screen” time.

The study did include an analysis of 1482 physicians and found “active time” to comprise on average 43% of the total time that they were logged onto a medical record. So basically, physicians may have been logged on to a patient’s EHR on average over a half-an-hour per patient encounter. Keep in mind average simply means average. There were doctors who spend more time on the EHR. A doctor who is not as quick at navigating through the EHR or has more complex patients, more challenging insurance situations, or more demanding administrators could very well be spending more time. This also probably didn’t include the time spent wiping the tears off the keyboard.

Moreover, the study did not indicate when exactly the EHR time occurred. For example, how much of this intimate time with the EHR transpired during regular working hours versus so-called “off hours,” you know the time when physicians are supposed to be doing things like sleeping, eating, taking care of their families, and peeing? EHR time usually is uncompensated time for physicians. You don’t typically hear physicians say, “I want to make some extra cash this weekend, so I will jump on to the EHR and start randomly clicking on things.” And EHRs don’t tend to pick up the check at dinner.

So, while this study did confirm that physicians are spending a fair amount of time on EHRs, it may actually underestimate the time. It also didn’t specify how much of that time was quality time versus wasteful, gut-wrenching time and how much of that time could and should be passed off to other people such as medical scribes, assistants, administrators, or people who love paperwork or love to type.

The general feeling is that many doctor are frustrated with EHRs. I’ve met quite a few doctors who say they love Twitter, YouTube, Minecraft, Legend of Zelda, Tinder, GroupOn, and even that app that tells you whether it is dark outside. But very few have told me that they love their EHRs. Quite the contrary. The word EHR is often followed by an expletive or a sound that one makes when your pants are falling down. Finding doctors complaining about their EHRs can be easier than finding a gory moment on Game of Thrones. Just look at some of the comments on Twitter:

Also, this latest Annals study ain’t the first to show how much time doctors are spending on the EHR. As the following tweet references, a previous study had showed that over a third of a doctors time in the examination room was spent with the EHR:

Yes, doctors are spending a lot of time with the EHR, seemingly more than their patients and potentially more than their family and friends. After all, on day that you have eight hours-worth of patient appointments, you could be spending well over eight hours with the EHR. That’s longer than some Hollywood relationships last. As with all relationships, the next question you’ve got to ask is how much of that time is really quality time and whether the relationship is even worth it.