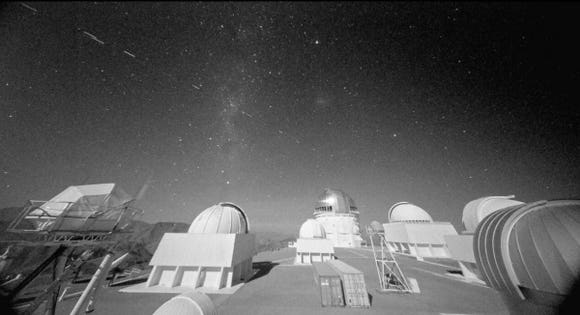 In May of this year, Elon Musk’s SpaceX launched the first group of its new satellite network: Starlink. Designed to provide 5G services worldwide, this first launch saw a constellation of 60 satellites, all in a trail, deploy across the night sky. Astronomers, who have been warning about the threat that networks like this could pose to their field for decades, were right to be worried.

Despite the best recommendations of astronomers on how to mitigate their impact, Starlink has plowed ahead unabated with their business plans, launching another network of 60 bright, large, reflective and radio-interfering satellites in November, ruining numerous professional observations.

Newly announced plans will accelerate the launch timetable, adding 60 new satellites every 2 weeks starting in late December. They will put over 1,500 new satellites into orbit by 2020’s end. Unless somebody stops them, this will radically transform the skies of planet Earth.

Astronomy is quite possibly the oldest science in the world. For tens of thousands of years, long before the development of metal-working, agriculture, or even the alphabet, humans have looked to the heavens for inspiration and information about our existence. From the wonder of eclipses to looking through a telescope to understanding the workings of the Universe and our place in it, astronomy has long been a civilization-scale endeavor.

Although the space age may have begun back in the 1950s, there are still only around 2,000 active satellites as of 2019, with most of them small and faint. However, driven by the desire to build global 5G networks in space, multiple potential providers have announced plans to deploy mega-constellations of thousands of large, bright satellites, with SpaceX’s Starlink being the first to begin launching their prototypes.

It should go without saying that a new network of 12,000 satellites, which is what SpaceX and Elon Musk have procured FCC approval for as far as their Starlink program is concerned, would transform ground-based astronomy, and not in a positive way. The first phase, which SpaceX hopes to complete by next year, will send up a total of 1,584 such satellites, more than doubling the current (1,463) number of active low-and-mid-Earth orbiting satellites.

If you were to take stock of the entire night sky as visible from Earth, you would find that:

With competitors such as Kuiper Systems and OneWeb planning on launching similar networks, and Starlink attempting to procure approval for a total of 42,000 satellites, it’s possible that looking through a pair of binoculars in 2030 would reveal more satellites than stars.

These satellites pose significant risks to not only astronomy, but to humanity as well. The 5G radio signals will be strong enough to swamp a natural transition of water molecules that is essential for meteorology, challenging our ability to forecast Earth’s weather patterns from space. Observing programs like Pan-STARRS or LSST that rely on differential astronomy — where changes to brightnesses and positions are essential — will be greatly compromised, impacting our ability to find object that are potentially hazardous to Earth.

Even if we only had the 12,000 Starlink satellites to contend with and nothing else, any location on Earth would see an average of 140 such satellites in their sky at any given time. In their final orbits, they will be right at the limit of what human vision can discern, but that’s catastrophic for optical and radio astronomers, as well as for professional astrophotographers.

If these satellites were faint and few in number, it would be easy to reject any polluted exposure frames or even just the contaminated pixels. But with so many satellites of such great brightness, the problem is much worse. Photodetectors quickly get saturated, and additional parts of each image get contaminated each time a satellite passes. Software solutions, such as averaging over frames, deny humanity the benefits of differential astronomy.

Earlier in 2019, SpaceX and Musk authored statements claiming that these satellites will have a minimal impact on astronomy. They stated that SpaceX will prioritize reducing the albedo (reflectivity) of these satellites. They promised to provide on-demand orientation adjustments for astronomical observatories.

But these promises are actively being broken in the worst way possible.

The 120 satellites that have already been launched have impacted astronomy tremendously. In September, an Earth-observing satellite from the European Space Agency had to perform an emergency maneuver to avoid a Starlink satellite, even though it was Starlink’s responsibility to move. Numerous ground-based observations have already been photobombed (i.e., ruined) by passing Starlink satellites. The satellites remain as bright as ever and no orientation adjustments have ever been performed for the benefit of astronomers.

In response, astronomers requested a series of self-regulatory steps that Starlink voluntarily perform. They included:

Instead, SpaceX and Elon Musk brought in the proverbial steamroller.

On December 6, SpaceX President and COO Gwynne Shotwell issued a series of bizarre statements that appeared to completely misrepresent the astronomy community and ignore their concerns.

Instead of de-orbiting the current satellites or placing a moratorium on new launches, SpaceX announced a planned launch of 60 more satellites in late December, followed by another in early January. The plan of 60 new satellites every 2-3 weeks will get all 1,584 satellites up there before the end of 2020.

Instead of redesigning or coating the satellites, SpaceX is placing a test coating on one side of one satellite, meaning that 98% of the new satellites will be unchanged. Stating that the test coating was “just an experiment” and that the approach was “trial and error” signaled what a low priority addressing astronomers’ concerns were.

But the big lie came when Shotwell claimed that nobody in the company or the astronomy community could have possibly anticipated the problems that Starlink satellite would pose for astronomy. In her own words, Shotwell asserted:

This is an outrageous claim that has no truth behind it. I spoke with Professor Nicholas Suntzeff, former President of the American Astronomical Society, who described Shotwell’s statement as “clueless.” Suntzeff referred to many articles and books going back to the 1990s discussing exactly this problem for optical astronomy (and even earlier works for radio astronomy), and pointed out a TEDx talk that he himself delivered on the exact topic in 2013. Suntzeff closed by saying the following:

All I would say to the SpaceX COO is – try using Google, or call up the head of any radio or optical observatory and ask us about possible adverse effects on astronomy, and how we can minimize them.

The night sky is the heritage for all humanity, and any use of the sky must respect the diversity of all cultures. Eisenhower made sure that space exploration and development would be led by civilian agencies. We now need similar visionaries to assure that the night sky is shared responsibility rather than merely exploited.

This is extremely troubling, as there are no national or international treaties or regulations in place respecting the brightness or number of satellites a company can launch. Other than FCC approval, it is up to individual satellite providers to self-regulate. The worry is that Starlink, Musk, and SpaceX are more concerned with their business success than with any environmental or societal impact, and the evidence for that is very strong, as reading Elon Musk’s Twitter from less than 24 hours after Shotwell’s announcement indicates.

On the other hand, an exploitative entity would pay lip service to the communities they affect while continuing to actively harm them. They would ramp up their launch schedule. They would continue to send up offensive, unaltered satellites while putting minimal effort into solving problems that have been raised. They would invite consultants, but would squash any objectionable voices. They would distort the truth about concerns that have been raised. They would put their business interests — such as lucrative potential government contracts — ahead of any human interests. And they would deflect criticism by running PR campaigns that draw attention away from the real issues.

In approximately 2 weeks, another batch of 60 Starlink satellites will be launched, followed by another batch approximately 2-3 weeks later. At this point, the only things that can stop the launches are either a successful legal action or a reaction from the public that’s so negative and so strong that SpaceX and Elon Musk are forced to behave more responsibly. Otherwise, the allure of putting billions of dollars worth of infrastructure in space to support a burgeoning industry that promises to crest 12 figures by 2030 will be the only driving force that matters.

As Professor Karen Yeung has pointed out, “Firms lack sufficient incentives to set, comply with, police and punish violations of their own standards, and markets cannot ensure that firms will behave with integrity.” The night sky belongs to all of us here on Earth, and it’s up to all of humanity — not the questionable ethical compass of one mega-billionaire — to ensure that it isn’t taken from us.

NASA and Energy Department step up cooperation
As fires ravage the Western U.S., worried residents are turning to these apps to see how bad the air is
Sanctions against Turkey over Mediterranean gas drilling wouldn’t achieve much, former EU ambassador says
What Happens If A Hurricane Named After A Greek Letter Needs To Be Retired?
Coca-Cola Transitions To 100% Recycled Plastic In Netherlands And Norway