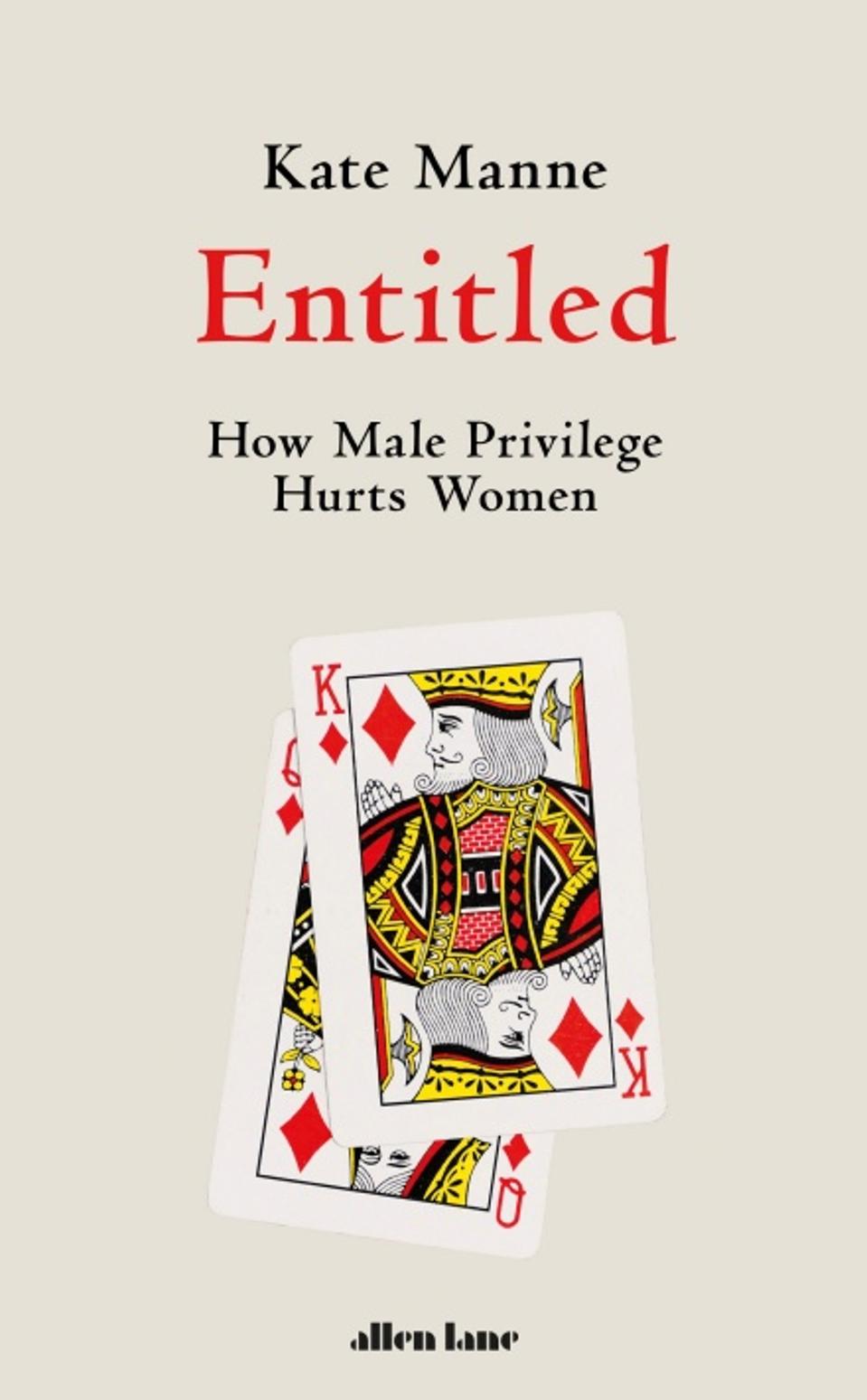 A timely examination of how misogyny and male entitlement affect all aspects of life in Western society, including sexual encounters, reproductive rights, health care, politics, knowledge, power, and relationship dynamics

How can a woman live her best life when everything she says and does is attacked, questioned or ignored? In today’s modern world, why is gender still a fundamental prerequisite to success?

Entitled: How Male Privilege Hurts Women (Allen Lane/Random House, 2020) by prominent philosopher Kate Manne is a timely and important investigation of misogyny, male privilege and how men believe they are entitled to women’s bodies, time, care, domestic labor, and admiration. In her earlier book, Down Girl, Ms Manne examined the ways that society polices girls and women who violate or even question the patriarchal system, whereas Entitled focuses on the range of ways that men behave that women cannot.

Interweaving a combination of recent anecdotes, news stories, literature, and scientific research, Ms Manne builds her case for how patriarchal structures and a culture of misogyny support widespread male behaviors from gaslighting and mansplaining to rape and mass shootings — most of which in the past 20 years were planned and carried out by white men and boys. Early in the book, Ms Manne coins a word, himpathy, to describe the way that powerful and privileged boys and men who commit acts of sexual violence or who engage in other misogynistic behaviors often receive sympathy and concern whilst their female victims are marginalized, disbelieved or told they somehow provoked their own extreme circumstances. Think: Brett Kavanaugh and Harvey Weinstein and the familiar excuse “boys will be boys.”

Entitlement is not genetic: women are just as capable of acting out of a sense of entitlement as men are, and the author recognizes this. Ms Manne mentions her own position of privilege (she’s a white woman) and points out that provides her with entitlements that non-white women and LGBTQIA minorities typically do not enjoy. However, boys in general are raised to expect special treatment, and boys and men live in a pervasive culture of entitlement, whereas women and girls are penalized — often severely — if they do not adhere to this often unspoken code. In short, women must live according to vastly different (and higher) standards than men or they are punished.

The book is nine chapters long, and each covers the various entitlements enjoyed by privileged men. But the chapters about abortion and health care particularly outraged me. Yet it’s no surprise that women’s bodily autonomy and health concerns are not taken seriously by the medical profession despite the fact that women usually prioritize themselves last. Women’s health complaints are frequently whitewashed by the medical establishment. Even their pain is regularly downplayed or disbelieved, and inspires less medical intervention, despite research indicating that women feel slightly more pain than men when experiencing the same noxious stimuli. Ironically, despite the medical profession’s innate distrust of women’s complaints about their own health status, their testimonies about their children’s health complaints are recognized as being supremely competent.

The author also discusses the poor health care that Black women in particular receive from white care providers, and how Black women are routinely neglected and dismissed — silenced — by the medical establishment. Even fame and wealth don’t help Black women, as we saw when tennis superstar Serena Williams nearly died after childbirth because her health care team ignored her repeated warnings about her history of blood clots. Although Ms Manne did include several credible anecdotes and news stories, I was disappointed that she did not reference any scientific studies of Black women’s (mis)treatment at the hands of the medical establishment.

The other chapter that really made my blood boil focused on Elizabeth Warren and how her male colleagues treated her during her presidential run, and how she was largely ignored at the ballot box by the American public despite being perceived as a serious and worthwhile candidate. Manne writes:

“But while there is reasonable disagreement over whether Warren deserved to win the nomination, there has been considerable surprise and consternation that she didn’t at least do better than she did — losing contests to various white men, in the form of Bernie Sanders, Joe Biden, and sometimes even Pete Buttigieg or Michael Bloomberg — especially given her erstwhile popularity.” [Italics the author’s] (p. 177)

Although she continues the discussion about Elizabeth Warren’s political opponents, Ms Manne’s observations are generally applicable to any situation faced by women:

“We expect too much from women. And when a woman we like or respect disappoints us, even in minor and forgivable ways, she is liable to be punished — often by people who think they have the moral high ground, and are merely reacting to her as she deserves, rather than helping to enact misogyny via moralism. Meanwhile, no such perfection is demanded of her male rivals. Sanders paid no penalty for flipping his 2016 position on whether the candidate with a plurality of delegates should automatically become the Democratic nominee, when that outcome stood to his potential advantage in 2020. Nor did Biden face much criticism for his hazy public-option health plan, or for the embellished stories he told on the campaign trail — not to mention, his history of plagiarism.” (Pp. 177-178)

I really appreciated how the author consistently focused on women’s experiences of men’s entitlement rather than talking about how men think about themselves in relation to women.

In our modern world, women are still fighting for equality. Sure, we have the right to vote (finally) but we still are responsible for most of the housework and childcare and are paid less than men for working the same jobs, whilst patriarchal culture ensures that women pay more for clothing and dry cleaning and hair cuts and health insurance than men. It is clear to any rational person that there is still much work to be done before we achieve parity.

And as an aside, writers typically use Twitter to share news of their writing with the public — normally a happy occasion. But when I looked at the author’s Twitter timeline, I was astonished to see her announcement for the upcoming (at the time) release of this book had been removed after hoards of testosterone-poisoned misogynists reported it to the deluded imbeciles that populate the staff of Twitter:

The message is overwhelmingly clear: an intelligent, well-educated, respected woman is not allowed to share her writing with the public on Twitter if she reports on the myriad ways women are abused by a paternalistic Western culture.

If you read Ms Manne’s previous book, Down Girl, and were dismayed by her conclusion that nothing would likely ever change for women in any meaningful way, Entitled ends on a more optimistic note. The final chapter is an eloquent outline of Ms Manne’s her hopes for her baby daughter and what she will hopefully be entitled to expect in the future, despite the many seemingly intractable problems facing women and other minorities today. Welp, I guess Ms Manne must be at least somewhat optimistic now that she is a new mother to a baby girl in a male-dominated world.

This book is witty, honest and infuriating. It is meticulously researched (with more than 60 pages of references and notes), and well-indexed (11 pages) and delivers a powerful dose of reality about the many obstacles that our patriarchal culture creates. Entitled is impassioned and timely and is essential reading for us all.

Analyzing Data From 55 Nations, Psychologists Find These 4 Personality Traits To Predict Covid-19 Compliance
A Touch of History for Asteroid Sample Return Mission on This Week @NASA – October 23, 2020
For the first time, astronomers see plumes of sulfur dioxide from the volcanoes of Io
Raymond: Space Force has a plan to unify acquisition agencies
Space Force stands up operations command in Colorado Springs