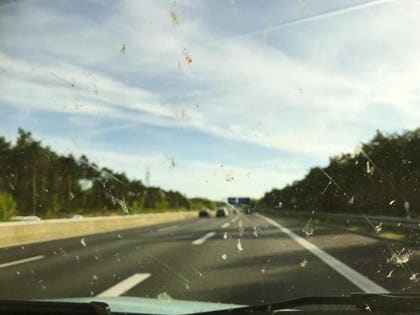 It started when someone at a Florida gas station wondered aloud what was on his windshield, not knowing he’d get an earful from the professor at the next pump. Mark Hostetler, an urban ecologist at the University of Florida, explained lovebug season and recognized while listening to himself talk that helping people identify such dots and smears as the unique insects they once were could be a great entry point into basic etymology education.

Hostetler published his book That Gunk on Your Car in 1997 and received media attention, including an appearance on The Tonight Show with Jay Leno:

By 2018 the book was out of print but Hostetler wanted to revive the concept and suggested his programmer son Jámm help him introduce the gross-but-fun field guide to a new generation. How do you get young people to engage in something? With an app of course.

Jámm was “reluctant to say the least,” he recalled in a phone interview. The then-high school senior reacted as many teenagers do to their parents’ enthusiastic suggestions. He said no. But he thought it through and, knowing he was on his way to the University of Florida the following year as a computer science major and could use a project to build on his experience, changed his mind.

The iPhone-only app bears the same name as the book, That Gunk On Your Car. It, like the book, offers entymology education for anyone who likes, or at least tolerates, a little ick factor, and wants to develop knowledge of the natural world. You will learn that grasshoppers splat yellow (not green) and their insides create a fairly smooth consistency of varying sizes. You will also learn that you can mostly identify sex by the color of the streak on the glass, because a touch of red identifies the blood of a female insect. That is because females need more blood in their bodies to carry eggs.

The user interface prompts selection of the windshield gunk’s size and shape, and then based on those selections, surfaces a list of potential matches:

So far, App Store reviews are good, but there aren’t significant plans to scale beyond a little more support and a forthcoming game. Jámm is building it as a one-man band and neither Hostetler has raised or earned any money on the app. There is no planned date for an Android release.

In the future, could there be an app to identify live insects pantry or snakes in the backyard? With smartphone cameras’ object recognition and the potential for AI, smartphones could easily be used for all kinds of nature education. iNaturalist already exists, Jámm explained. The father and son are also just time-crunched, as a professor and a freshman grappling with deadlines.

And they’re just sticking to the original mission of mainstreaming entymology. “The whole goal is to get people interested,” Jámm said. “And it’s weird and unique enough that I thought it would.”