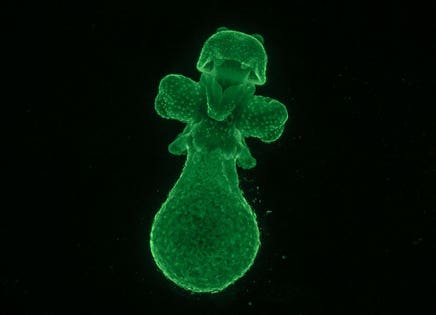 You are made of trillions of cells, perhaps somewhere in the ballpark of 30 trillion or so, all performing a variety of specialized functions. Your brain is processing these words, while your lungs breathe and your heart pumps blood and so on. Each would do a disastrous job of the others’ tasks. Yet, life was once much simpler. Single celled organisms appeared at least 3.5 billion years ago, and maybe as early as 4.28 billion years ago. But somewhere along the way there was a shift and multicellular organisms began to appear. Exactly when this happened is a topic of much debate.

Multicellularity involves quite a shift: instead of each single cell out for itself, cells living together in one organism must divide tasks and share energy and resources. Exactly how organisms achieved this transition has been elusive, though it was generally assumed to involve some kind of rare and complex genetic event. But increasing evidence suggests that it might have been easier than we thought.

Research examining closely related single cellular and multicellular algae shows that some single celled organisms today have the genetic equipment to achieve multicellularity: they don’t have to evolve new genes, they just have to use their existing genes in slightly different ways. Moreover, in some remarkable experiments with single celled yeast, researchers were able to create conditions that resulted in yeast cells forming elaborate multicellular structures, with certain cells performing specialized roles. Moreover, these complex structures, that resembled snowflakes, were able to replicate. Exactly what drives this complexity at the molecular level, or why this phenomenon seemed to truly take off like wildfire millions of years ago, is yet to be determined, but the new research prompts a fascinating rethink about how complex life evolved on Earth and perhaps elsewhere in the universe.

The Power of Many by Elizabeth Pennisi