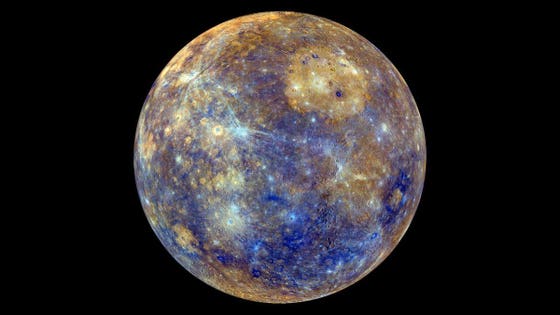 Mercury is the closest planet to the Sun, so is almost always lost in its glare. But not this month.

If you’ve never seen the tiny planet Mercury, tonight could be your night. The elusive inner planet, which is usually lost in the Sun’s glare, this month becomes visible just after dusk, and the views get better as the month develops. It first becomes easily viewable tonight beside a very young Moon, which will make it easy to see. As another bonus, the red planet, Mars is also nearby, and later this month, Mercury and Mars will appear to be right next to each other.

For planet-spotters after a view of the inner planet, it’s a rare chance to see Mercury.

Mercury will be close to a crescent Moon just after dusk on June 4, 2019.

Look to the northwest just after sunset tonight, Tuesday, June 4, 2019, and you’ll see a 2% illuminated Crescent Moon appear in the dusk close to the horizon. That in itself will be a grand sight, and for this month only, it’s a sighting that sees the Islamic month of Ramadan officially cease. As well as the delicate crescent of light on the Moon, you should be able to make out Earthshine on the rest of our satellite. That’s sunlight reflected from Earth onto the Moon. It’s always there, but it’s only possible to detect with the human eye when the moon is very young.

Mercury (right) is the innermost planet, so the hardest to see, though the presence of the Crescent Moon (left) makes it easier.

How to find Mercury

Mercury will be harder to see. It’s very small and looks almost star-like, and it’s best seen by scanning around with binoculars (though don’t start doing that until the Sun has set; it’s too dangerous). It’s relatively dim compared to the other planets in the solar system. When it’s low in the sky, it usually looks reddish, too, for the same reasons that the Sun looks red when it sets. It will be to the right to the Crescent Moon, just 6° away. An obviously red-looking planet Mars will be visible further above the Moon and Mercury.

For any decent view of Mercury this month, you can maximize your chances by putting yourself somewhere that has a good, clear view down to the western horizon.

Mars and Mercury will be half a degree apart on June 18 after dusk.

On Tuesday, June 18, Mercury will again be easier than usual to find because it will be next to Mars. Really, really close, in fact–just 0.5° apart. It’s the two planet’s closest encounter for 13 years. That’s going to be some sight.

Although Mercury will perhaps be easiest to find when it’s close to the Moon, then Mars, it’s actually furthest from the Sun (and therefore “up” for the longest after dusk) on June 23, 2019. Mercury at this “greatest elongation east” is theoretically the easiest time to see the inner planet, and since it will still be close to Mars, it should be simple enough to find.

Exotic locales for alien life, meet a 16-year-old satellite scientist – Physics World
Coronavirus diaries: social media in an unsocial age
What the data say about police brutality and racial bias — and which reforms might work
Rogue ‘missing link’ black holes could be zooming around the Universe as we speak
Oil prices fall further on virus fears, U.S. crude stock build