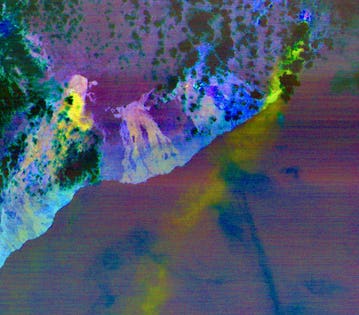 As part of Hawaii’s Kilauea volcano eruption, plumes of sulfur dioxide bubble out of the lava and form clouds of toxic gas as seen through satellite imagery. The sulfur dioxide gas is falsely colored yellow and green in this image, taken on May 6th in conjunction with NASA and Japan Space Systems and the joint ASTER Science Team.

NASA astronaut Ricky Arnold took this amazing photo on June 20th, 2018 of Hawaii’s volcano erupting from the International Space Station. You can see sunrise peeking out of the corner of Earth as a fiery orange dot glows in the darkness.

The two images above compare Hawaii’s eruption on May 23rd and June 8th from the Copernicus Sentinel-2 satellite. The Sentinel-2 is an Earth observation satellite deployed by the European Space Agency to monitor land changes, natural disasters, and forests.

Billowing ash, vapor, and smoke rise from the Kilauea volcano. In most instances, Hawaii erupts in a calm, predictable manner with periodic lava flows. However, for over a month Kilauea volcano has moved into hyperdrive with dramatic lava fountains and rivers of molten rock. This image was taken by NASA astronaut Drew Feustel on June 10th, 2018 while commanding Expedition 56 on the International Space Station.

The infrared image above is from DigitalGlobe’s Worldview-3 satellite and shows the river of lava erupting out of Kilauea. The image is falsely colored to show heat coming from the lava flow. You can see the flow encroaching on Kapoho Bay, which it eventually nearly filled in with basalt rock.

Oleg Artemyev, a Russian Cosmonaut for the Russian Federal Space Agency, captured this beautiful view of the giant crater in Mauna Loa volcano, a reminder of just how explosive eruptions in Hawaii can be to create such a massive crater.

Infrared image of Hawaii’s Kilauea volcano on May 6th, 2018. This image, taken by NASA’s TERRA satellite shows heat in color, with newly formed fissures in yellow. As fissures continue to form, geologists with the Hawaiian Volcano Observatory USGS Volcano Science Center monitor closely to give early warning to residents of Hawaii and map out new lava flow paths.