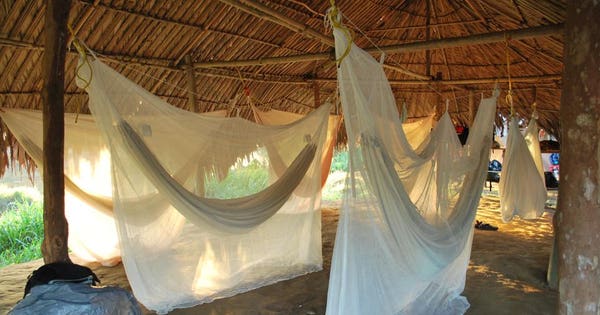 In areas of the world where malaria is rampant, mosquito nets save lives, especially treated mosquito nets. In recent decades, the mass distribution of bed nets treated with insecticides has played a critical role in reducing the spread of malaria in endemic regions.

Despite this, the number of global malaria cases remains substantial: around 219 million cases of malaria are reported annually and more than 430,000 people die from the disease — many of them children.

To  make matters worse, insecticide resistance is on the rise.

“Mosquitoes are amazingly resilient organisms that have developed resistance against every insecticide that has been used to kill them,” says Flaminia Catteruccia, professor of immunology and infectious diseases at the Harvard T. H. Chan School of Public Health.

Indeed, some malaria hotspots have seen near total resistance to pyrethroid insecticides, which are widely used.

But what if we didn’t try to kill malaria-carrying mosquitoes at all?

It sounds counterintuitive, yet Catteruccia and her colleagues wondered what would happen if, instead of insecticide, bed-nets were treated with an anti-malarial drug. This way, the mosquitoes would remain alive, but would not be able to develop and transmit Plasmodium falciparum (P. falciparum), the parasite that causes malaria.

To find out, the researchers coated a glass surfaces with the anti-malarial compound atovaquone, and then covered each surface with a cup. Female Anopheles mosquitoes were then placed in the cup so that they would come into contact with the glass whenever they landed.

According to the findings, relatively low concentrations of atovaquone (100 μmol per m2) were absorbed through the mosquitoes’ legs, and this completely blocked development of the malaria parasite while having no effect on mosquito reproduction or lifespan. Moreover, this anti-malarial effect occurred even when the mosquitoes were in contact with atovaquone for only 6 minutes, which is roughly how long wild mosquitoes rest on bed nets.

“When we put these data into a mathematical model using real-world data on insecticide resistance, bed net coverage and malaria prevalence, it showed that supplementing conventional bed nets with a compound like atovaquone could appreciably reduce malaria transmission under almost any conditions we had data for in Africa,” says Douglas Paton, lead author of the paper, which is now published in the journal Nature.

“What got us really excited is that it also showed that this new intervention would have the greatest impact in areas with the highest levels of mosquito insecticide resistance.”

Catteruccia explains that eliminating malaria parasites within the mosquito rather than killing the mosquito itself is a good way to prevent disease transmission while avoiding insecticide resistance.

“Ultimately, the use of antimalarials on mosquito nets could help eliminate this devastating disease,” she says. “It’s a simple but innovative idea that’s safe for people who use mosquito nets and friendly to the environment.”