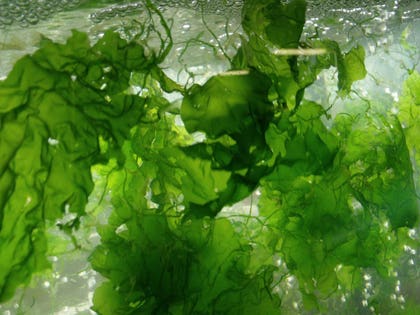 Throughout history, cultures around the globe have enjoyed the nutritional and medical merits of seaweed. In more modern times, these macroalgal plants’ diverse ecological properties have captured scientists’ attention.

Algae expert-turned-entrepreneur Dr. Pia Winberg is exploring the manifold qualities of a unique, endemic species of green Australian seaweed in the genus Ulva – unlocking not only its rich nutritional properties but also its medical potential for printing cartilage and wound healing.

The seaweed’s fibers could further be used to create biodegradable plastic and sustainable cotton replacements. It all comes down to the plant’s complex glycan sugars – specifically, sulfated polysaccharides.

These gel-like glycans are large molecules with biological properties that carry many health benefits attributed to their antioxidant, anticoagulant, antiviral and anti-inflammatory activities.

This serendipitous discovery stemmed from a cocktail party chat between Winberg and Gordon Wallace – a professor from the Intelligent Polymer Research Institute at the University of Wollongong where she happens to be affiliated.

“And he just sort of looked at me,” she says, “because scientists just see alginate – they don’t even register it’s from seaweed; they just think it’s a chemical on the shelf that you buy from Sigma.”

Winberg told him she grows seaweed that has gels with very different molecular structures to alginate. She and Wallace teamed up to investigate.

In wound science and medicine, the compounds were called “ground substance”.

“When you injure yourself and liquids flow into the wound this is ground substance, but medical science was looking at the cells and proteins and growth factors,” Winberg explains.

“Science regarded the ground substance as just big gooey stuff to carry the important things. It is bulky and sticky, and it is challenging for a chemist to analyze so it was pretty much avoided in research.”

The glycans combine to create complex signatures of these molecules – the glycome – coating every cell membrane and driving many functions that include turning inflammatory processes on and off, thus playing a vital role in immune function.

“The glycome is the most complex code in the human body that we know today, even more so than the genome or the proteome,” says Winberg.

Medical research on tissue fabrication used alginate because it was available and big and gooey. But although the medical researchers could print with it, the cells “just sort of sit there”.

“Cells don’t recognize alginate like it’s their own connective tissue because the signature is not the right one,” Winberg explains.

Her seaweed gel has such a similar signature to mammalian connective tissue that, unlike alginate, human cells like fibroblasts and neurons can recognize it.

“They attach to it, spread out and thrive and grow, and start to create collagen which then binds to it,” she says. The seaweed glycans even protect the collagen.

One limitation of seaweed glycans in new materials is that they are soluble. But there are chemical processes that can make them insoluble, Winberg says.

“We can just put a little methacryl group on a part of it, and then after it’s printed and we expose it to visible light, those molecules crosslink and become chemically bound, making them insoluble.

“So now we can print a soluble molecule into an insoluble scaffold structure that cells attach to and thrive on.”

Essentially, because the body recognizes them, the seaweed compounds act as a replacement for connective tissue and can promote burn and wound healing. Their properties might also heal the mucosal membrane in the gut, Winberg suggests – another focus of her research.

Combining the technology developed by Wallace and colleagues with specific seaweed glycans – like the BioPen, a 3D, handheld printer to replace cartilage in damaged knees – means there are opportunities to test seaweed bio-inks in clinical trials.

Moving forward, these types of glycan molecules have many potential applications in medical science. For instance, researchers are looking at implanting islet cells for people with Type I diabetes and printing tissue for chronic wounds, a major problem in the health industry.

Winberg grows these novel materials on one of the world’s first land-based seaweed farms. She pioneered the farm in Shoalhaven on the south coast of New South Wales, Australia, after leaving academia to translate her research into practice with start-up company ‘Venus Shell Systems’.

She grows the seaweed using seawater pumped up from the ocean. The seaweed gobbles up carbon dioxide and other food waste products from a large wheat refinery and releases clean seawater and oxygen back into the environment. It is, therefore, a fully sustainable industry that optimizes the consistency of the seaweed’s nutritional and fibrous qualities.

As well as its medical applications, the seaweed’s glycans could provide “a whole new frontier of fibers and 3D fabrication of materials,” Winberg says, once she can scale up production to sell them cost-effectively.

In the meantime, her collaborators have spun threads from the seaweed extract and woven it into a fabric. They’ve also cast them into a plastic film.

Seaweed extract made into fibers.

“What’s exciting about this,” she says, “is that you can then formulate and manufacture chemical triggers within that material.”

This enables the scientists to program materials to determine how long they’ll last, whether they are soluble or insoluble, and how they react with exposure to different environmental conditions like pH or temperature.

“So the materials suddenly become so much more intelligent, if you like.”

These diverse opportunities are made possible by collaborations with other scientists, chemists, mechanical chemists, and chemical engineers.

In turn, Winberg strives to educate them about the multifaceted, ecological benefits of using seaweed – a sustainable product that can be grown and used in harmony with the Earth’s land-water systems.

Disclosure: Natalie collaborated with Dr. Winberg several years ago on an unrelated research project and they have remained acquaintances. She has no invested interests in Dr. Winberg’s seaweed farm or research.