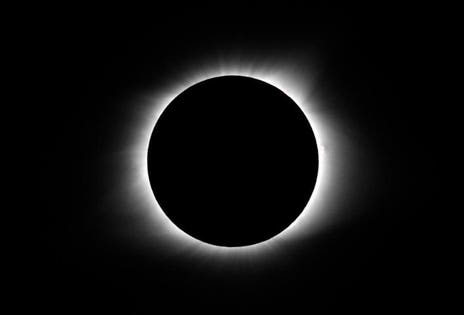 The moon covers the sun as it creates a total eclipse, Monday, August. 21, 2017, in Cerulean, Ky. At the 3 o’clock position is a prominent solar flare. (AP Photo/Timothy D. Easley)

They say that a watched pot never boils. I’m not exactly sure who “they” but they are most certainly wrong. Fill up a pot with water. Put it on the stove. Turn the stove on. Watch it. It will eventually boil. It’s simple physics: enough heat added to the water will cause it to change phases and become a gas. The act of that transition is called boiling. And in fact, watching a pot starting to boil gives you some hints into some pretty amazing physics.

But to see this cool physics in action you can’t just watch the pot. You have to watch it very closely.

After you turn on the stove, you know that if you were to touch your finger all the way down to the bottom of the pot, you would probably burn yourself, so don’t do that. But if you just put your finger a little into the water it would only feel lukewarm or even cool. That’s how you know that there is a huge difference in temperature. The bottom of the pot is getting increasingly hotter, while the top of the pot is exposed to air, keeping it cool.

As you watch you’ll notice some of the water at the bottom beginning to shift and shape, forming little packets that rise up to the surface, cool off, and then slink back down. If you were to drop some dye into the water you can see this happen without even having to work very hard. What’s happening is that little pockets of water are randomly getting hotter than average and expanding, and as they expand they become more buoyant and rise to the surface. Once they reach the surface and touch that cool cool air they, well, cool off. Now cooler they become denser than average, losing their buoyancy, dragging them back down to the bottom where the cycle repeats anew.

Our sun is obviously not a giant pot of water. Wrong elements and wrong geometry. Instead it’s a giant ball of plasma, mostly hydrogen and helium with a smattering of other elements. The pressures and temperatures are so great in the core, however, that the hydrogen fuses into helium releasing energy. But the surface of the sun sitting millions upon millions of kilometers away from the core is exposed to the cold hard relentless vacuum of space itself.

And so you have a very familiar scenario. The core of the sun is incredibly hot and the surface is not. And while the sun is made of plasma, not water, it does share something in common with a fluid like your pot of water. It can convect.

So blobs of sun material near the core become randomly hotter than average, buoyant, and rise to the surface. Once they reach the surface and touch space they immediately cool off, becoming more dense, and slink back down below the surface.

This effect is seen in any close-up view of the sun. The surface is not a smooth unbroken featureless expanse. Instead it’s broken up into tiny little cells called solar granules. And the word tiny here is only relative: each solar granule is about the size of the planet Earth.

This is the way that the sun is able to transport heat from its core to the surface where it can eventually be radiated out into space. And eventually shine on your face.

But unlike a pot of boiling water, you probably shouldn’t watch the sun.