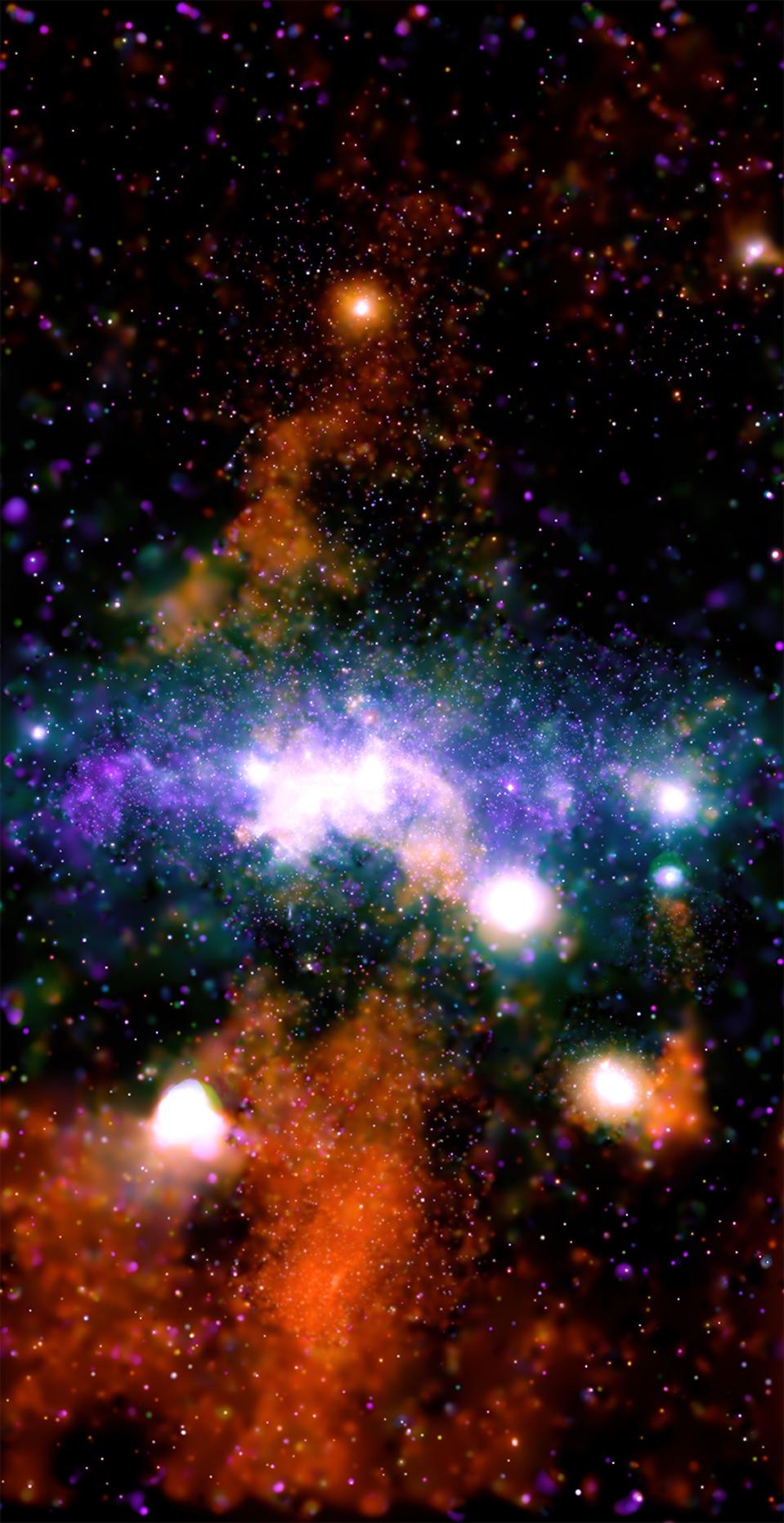 When we look out at the Universe on the largest cosmic scales of all, gravity is the only force that matters. Even though the other fundamental forces of nature are far stronger, the weak and strong nuclear forces are only short-range forces, while the Universe is electrically neutral overall, leaving gravitation alone to dominate. But inside large, massive structures like galaxies, the normal matter contracts and collapses, forming stars and gas clouds, interacting with black holes and neutron stars, and experiencing otherwise “messy” physical conditions.

In our nearby Universe, no place is messier than our galactic center. Located some 27,000 light-years away, we’ve discovered the most massive black hole within the nearest ~2 million light-years: Sagittarius A*, containing as much mass as four million Suns. But surrounding that are all sorts of fascinating features: cold gas clouds, clusters of new stars, supernova remnants, and elongated filaments of hot, X-ray emitting matter. With the newest data from NASA’s Chandra X-ray telescope providing a deep, high-resolution view of the Milky Way’s core, it’s now possible to untangle these “snakes” to reveal precisely what’s inside.

The first thing we can look at, above, is the X-rays themselves, but to look at them color-coded by energy. X-rays, in general, come in two different categories:

There are four independent features you should notice when looking at the X-ray images. The first feature is that they come in two different colors: orange/red and blue/violet, where the orange-red colors represent soft X-rays and the blue/violet ones are hard X-rays. Second, the soft X-rays exist above and below the galactic plane, while the hard X-rays dominate in the plane of the galaxy itself. Third, there are a large number of “dots” smattered throughout the image; these are point sources, like black holes and neutron stars. And, perhaps most prominently, there are a large number of ultra-luminous, saturating “white” regions, which correspond to regions where the X-ray flux is tremendous across multiple energies.

One of the ways we gain important information about the Universe is by looking not just in one set of wavelength bands, like the X-ray, but in disparate ones. Above is the same exact region of space, except instead of being imaged in X-rays from space, it’s been imaged in radio wavelengths from the ground: by the MeerKAT array of radio telescopes. Unlike in the X-ray portion of the spectrum, the radio signals appear to trace out filament-like shapes that appear to serve as bridges, connecting the various X-ray emitting regions to one another or at least appearing to be emitted from the brightest X-ray regions.

This tells us that something is likely happening between the stars — in the interstellar space separating them — that’s being elongated into thread-like features over enormous distance scales: around ~20 light-years across, typically. These thread-like features may seem unusual, but very similar structures have been observed in space before, although not in galactic environments like this. Instead, these threads are most similar to the traced lines we’ve seen in a completely different realm: close to the surface of the Sun.

What you can see, just beyond the Sun’s photosphere, are loop-like structures that are glowing with hot, plasma-rich streams of matter. These can be described as plumes or fountains, appearing as though there are threads connecting different regions of the Sun, and these bright plumes trace out those thread lines.

Physically, we understand what’s happening in terms of magnetism. The Sun has regions across it that vary in temperature, and the ionized nature of the solar plasma tells us that electrons and atomic nulcei will get transported at different rates owing to their different charge-to-mass ratios. This creates charge separations and electric currents, which in turn create magnetic fields, which in turn confine plasmas and create these telltale structures on the Sun.

Also, when these magnetic field lines align, anti-align, break, and/or reconnect, they can trigger the emission of fast-moving particles and the ejection of matter. That provides the origin, at least as far as we know, of events like solar flares, intense ejections of matter, and other examples of space weather.

One theory that was put forth as to the nature of these features in the galactic center is that they’re similar in origin. The galactic center has been known, for some time, to possess the following properties:

In addition, our central black hole is presently quiet, but the surrounding environment displays evidence that it was active relatively recently. Many nearby regions — which appear as bright spots in the X-ray image — consist of either bright, young star clusters only a few million years old, or dense gas clouds that are either in the process of forming new stars or contracting under their own gravity: a predecessor to star-formation.

The densest of these clouds are found in what we call the central molecular zone, which also contain some of the youngest new stars present in the Milky Way. Given that there are also high-energy structures found in the galactic bulge and halo — extending significantly away from the galactic plane itself — many have speculated that there is some type of connection between the central activity in the galaxy with these extended structures. But in order to test that speculation, we needed high-resolution data in multiple wavelengths of light, and specifically in the radio and the X-ray, together.

In particular, there’s one filament — just below and to the left of the galactic center as viewed from the orientations shown here — known as G0.17-0.41, which shows both X-ray and radio light overlapping in this thin, narrow region approximately 20 light-years in extent. A long filament like this can form between two strongly magnetized, ionized regions under similar conditions to what occurs in the Sun: when two magnetic structures with anti-aligned fields suddenly reconnect, releasing an enormous amount of energy. The X-ray emissions, located precisely where this radio “filament” is found, offers some very strong support for this picture.

This is very, very similar to another thread-like feature that had been observed previously: G359.55+0.16. Again, X-ray and radio emissions overlap, but what’s particularly compelling here is that the filaments are so long — about 20 light-years in extent in each case — compared to their width, which is just 1/100th of their lengths. The fact that we can resolve these features and peer into their nature from these multi-wavelength views can help us at last understand just how activity in the galactic center can create not only these intricate features, but give rise to extremely high-energy cosmic rays and other energetic events.

According to Q. Daniel Wang, who wrote the scientific paper associated with this new set of observations and images:

“The galaxy is like an ecosystem. We know the centers of galaxies are where the action is and play an enormous role in their evolution. This thread reveals a new phenomenon. This is evidence of an ongoing magnetic field reconnection event.”

What’s fascinating about this is that it provides direct evidence for a “missing link” phenomenon that takes too long to observe over the timescale of a human lifetime: how energy is transported from the inner regions of a galaxy away from the center, influencing the matter around it.

In galaxies like Messier 82, above, also known as the Cigar galaxy, you can clearly see (in red) how a burst of recent star-formation can translate into strong galactic winds, which impart large amounts of energy to the gas and plasmas found in the environment surrounding the galactic center. Over long periods of time, this can result in energy and matter being transported not only from the inner regions to the outer regions of the galaxy, but can kick material out of the galaxy entirely, removing its ability to form new generations of stars in the future.

Importantly that’s not what’s going on in our Milky Way, at least not from the study shown here. These energetic features we’re discovering are still located within the inner reaches of our galaxy, extending for up to a few hundred light-years away from the galactic center. For contrast, the largest features we’ve found related to energy being transported from the galactic center to the outskirts are known as Fermi bubbles: diffuse, X-ray emitting plasma extending for tens of thousands of light-years above and below the galactic plane. Although both are caused by energetic phenomena originating from the galaxy’s center, there is no identified connection between this study and these outer phenomena.

However, what is notable about the magnetic fields that ought to be present in the galaxy’s center is their unusually large strength. When we look out at galaxies in the Universe, we have a technique for how to measure the strength of their fields: a phenomenon called Faraday rotation. When you point your telescope at a background light source in space, the light will typically be unpolarized: the polarizations of the arriving photons will be random, and won’t prefer horizontal to vertical or right-circular to left-circular directions or vice versa.

If that light passes through a region where you have a coherent magnetic field, however, that light will become preferentially polarized in one direction versus the other, proportional to the strength and direction of the magnetic field. For most galaxies where Faraday rotation is detectable, we observe field strengths between a nanogauss and a microgauss, on scales from dozens to thousands of light-years.

What we’re finding along these filaments, however, are fields that are much stronger: greater than one milligauss, or over 1,000 times stronger than a typical galactic magnetic field. This is expected only to occur along radio filaments: thin thermal plasmas powered by magnetic reconnection. When we overlay X-ray and radio data together the two radio/X-ray filaments, highlighted in red boxes, clearly stand out.

The center of our galaxy houses some of the most interesting physical and astrophysical phenomena around, and yet it’s maddeningly difficult to observe. From within our own Milky Way, observing other locations is tremendously difficult because of all the intervening matter in the way. Neutral gas, dust grains, and ionized plasmas not only can block a significant fraction of the light we’re interested in, but they also emit their own light. As the old saying goes, however, one astronomer’s noise is another astronomer’s data.

By leveraging high-resolution radio and X-ray images of the central region of the galaxy together, we can finally identify the long sought-after radio filaments that showcase these strong magnetic features in our galaxy, and they match up exquisitely with X-ray emission as well. The magnetic reconnection events that likely underlie them are the first direct evidence we have for the theoretical prediction that solar flare analogues should exist in our galaxy, driven by the hot young star clusters found in the galactic center. With more research, astronomers now hope to learn how cosmic rays accelerate, hot plasma heats up to even greater temperatures, and how turbulence arises in these extreme environments. The high energy galaxy, with both radio and X-ray data combined, just got a lot cooler and hotter in tandem.

CDC Warning: RSV Is Spreading In Southern U.S., Why This Is Unusual For Respiratory Synctial Virus
Hydrogen planes, electric propulsion and new regulations: Aviation is changing
We have the first-ever 3D map of our Solar System’s heliosphere, and it’s amazing
What Are The Hottest Stars In The Universe?
Some People Can See Through Camouflage, And It’s Not as Hard as You Think