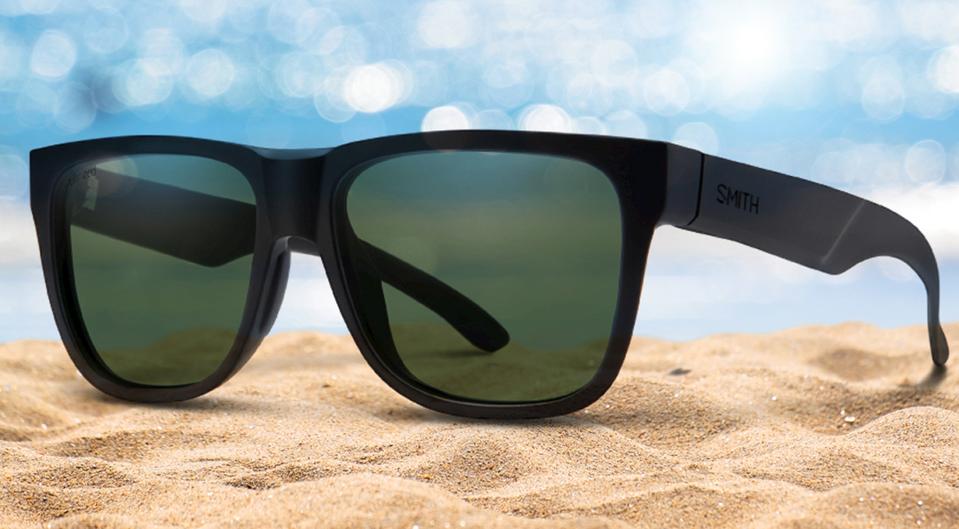 In the second of five Green Gear features – where we showcase a consumer product that’s been manufactured in an environmentally friendly way – we’re looking at Smith’s Lowdown 2 Core sunglasses, made entirely from recycled plastic and organic materials.

An animated feature by Reuters shows the staggering number of single-use plastic bottles being bought across the world. Every day, 1.3 billion bottles are used, the equivalent of a bottle pile half the size of the Eiffel Tower in Paris. Over the last 10 years, 4 trillion bottles have been sold and that’s enough to form a pile 2.4km high, dwarfing Manhattan and covering half of Brooklyn.

The plastic problem remains a major pollution issue that is all too often overlooked or ignored. An investigation by The Guardian revealed that an alarming number of cities around the US are not recycling many types of renewable plastic. Instead, they are being landfilled, burned or stockpiled and so massive amounts of recyclable material is ending up as garbage.

The Portland, Oregon-based company came up with an environmentally friendly alternative. Launched in April, in conjunction with the 50th anniversary of Earth Day, they had been working for about three years to develop the material in a way that would not limit the design or functionality of the sunglass frame.

“Most high quality frames are based on a nylon. Nylon is a very resilient form of plastic, very flexible, very paintable, very easy to manipulate and very consistent in its production processes,” Eric Carlson, global brand director at Smith, told Forbes. “So by changing to a non nylon-based material – which are made of various types of materials, polycarbon being a majority of it –  you get different properties that we’ve had to adapt let’s say.”

The Lowdown 2 is a classic, unisex Wayfarer-style design with polarized lenses that feature an anti-reflective, hydroleophobic coating. The frame measures 126mm x 145mm (the lenses measure 55mm in length and 45mm in height, the bridge measures 16mm and the temples are 145mm in length). At the moment there’s only a limited choice of a matte black frame color and polarized gray lenses, but that’s soon to change.

Two more frame designs are coming in just a few weeks, the Eastbound Core and Shout Out Core. Then in January, all three styles will have new color options. “We’ll soon go from one option to three options and then to six options,” Carlson said.

The build quality is beautiful; the frame is robust and even when it flexes slightly to fit around your head, it feels indestructible, plus the matte black finish adds an extra layer of style. The logo is even embossed to avoid any need for adhesive.

My single, solitary grumble is that I’m a 6-foot rugby player – a front row rugby player – and these a just a smidgen on the small side for me. That said, my wife adores them and truth be told, they look much better on her. However, even on her petite 5’4” figure, they’re still a comfortable, snug fit and don’t feel like they’re going to slide off anytime soon, even when she’s out running.

The plastic is sourced from all over the world, an indication that recycled plastic finally has a global market now and is widely traded.

“The good news is, at least from our standpoint, is that the use of recycled materials has gone in a very short period of time from a boutique industry that you literally had to find artisans and crafts people that could reprocess this material and turn it into a production ready source again. Now it’s on a massive global scale,” Carlson said.

The Smith Lowdown Core 2 sunglasses are a snip at just $129 and they’re available here.