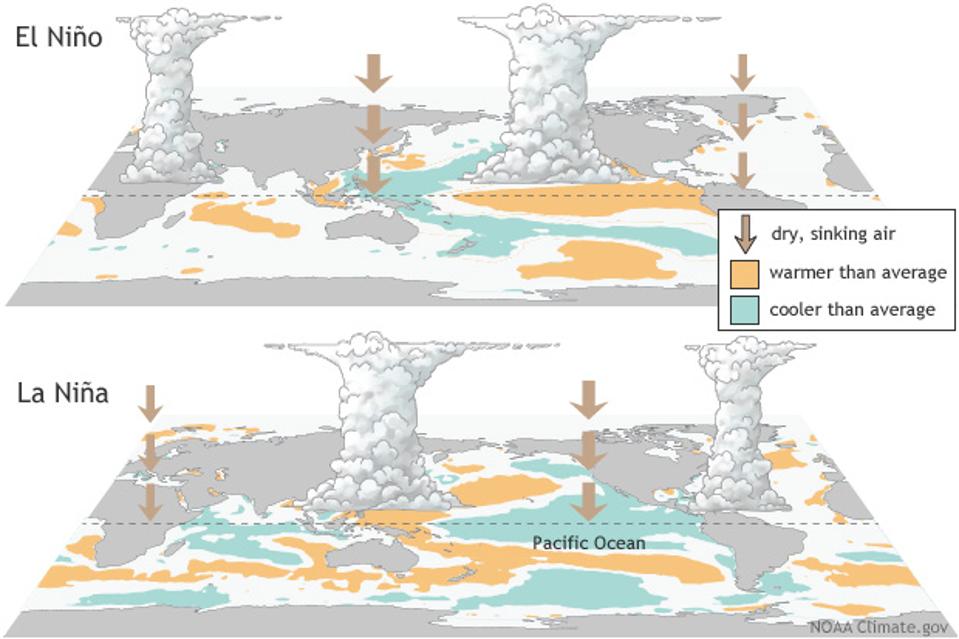 In weather and climate, there are terms that gain familiarity with the public even though scientists have understood them for decades. In contemporary times, Polar Vortex, derecho, and “bombogenesis” come to mind. I used to think of El Niño as one of those terms when I was in college, but over time the public seems have better understanding of the phenomenon and that it can affect weather patterns around the world. In December 2018, NBC News asked me for a bold scientific prediction for 2019. I told them that a weak El Niño earlier in the year combined with the seemingly omnipresent warming trend of the past few decades will likely help 2019 challenge for one of the top 5 warmest years on record (perhaps even the warmest). Most experts project 2019 to be the 2nd warmest on record. In recent decades, El Niño and La Niña years, on average, have trended warmer (see graphic at the end of this article). However, a new study suggests that El Niño-warmed years superimposed on a warming climate may have a connection. El Niño swings themselves, according to the study, have become more intense in the industrial age. Even as I typed that last sentence, the array of skeptical questions and claims that will emerge flashed into my head so let’s explore this more closely.

El Niño happens ever two to seven year as the warm phase of something called the El Niño-Southern Oscillation (ENSO). Its most distinguishing characteristic is a “blob” of warm ocean waters in the tropical Pacific Ocean (graphic above). The cold phase of the ENSO cycle is called La Niña. Ok, so what? El Nino affects broad oceanic and atmospheric circulations, which leads to changes in weather patterns all around the world. I explain the ENSO cycle in a previous Forbes piece at this link.

In a new study published in Geophysical Research Letters, data revealed that El Niños have become more intense in the Industrial Age. For more insight on the study, I reached out to Professor Cobb, the study’s principal investigator and Georgia Power Chair and ADVANCE Professor in the Georgia Institute of Technology’s (Georgia Tech) School of Earth and Atmospheric Sciences. She said,

This record has been 20+ years in the making. The fact is that we need centuries and centuries of data about past ENSO variability to determine whether late 20th century ENSO extremes are different then they were in the pre-industrial era. This is partly because very strong El Nino events don’t happen very often, but also reflects the wide range of ENSO behavior, even during the 20th century. The new reconstruction looks back 7,000 years, in isolated windows of coral data, to quantify a robust baseline of natural ENSO variability. When you’re talking about centuries of coral data generated at monthly resolution, that’s a lot of individual analyses.

Cobb is aware that there will be naysayers and whispers. She cautions that this is not the first study to observe a recent increase in ENSO strength relative to a multi-century baseline. In other words, this is not “1-study hysteria,” which I often caution against, yet people on all sides of the ledger are guilty of from time to time, especially in social media. My colleague Andy Revkin has also opined about “single-study syndrome.”

What sets the current study apart? It is one of the most robust because modern corals at their research site in the Pacific Ocean track temperature swings during El Niño and La Niña events. Cobb stopped short of conclusively linking human-caused climate change. In a press release issued by the Georgia Institute of Technology, Cobb goes on to say,

The physical proof taken from three islands that dot the heart of the ENSO zone has also thrown down scientific gauntlets, starkly challenging computer models of ENSO patterns and causes. A prime example: Previously unknown to science, the study showed that in a period from 3,000 to 5,000 years ago, the El Nino-La Nina oscillations were extremely mild. “Maybe there’s no good explanation for a cause. Maybe it just happened,” Cobb said. “Maybe El Nino can just enter a mode and get stuck in it for a millennium.”

In an email to me, Cobb added, “Together with model analyses showing a possible strengthening of ENSO impacts under continued warming, such observational evidence for a recent intensification of ENSO takes it one step closer to being listed as a known impact of man-made climate change.”

Ok, Dr. Shepherd but how do they get information on climate from corals? I actually receive questions like this all of the time. Climate scientists have long used “proxies” to extract information about climates of the past. NOAA has an outstanding website explaining how corals, pollen, ice cores, and tree rings can be used to retrieve useful and accurate information from past times. In the aforementioned study, Pam Grothe, a professor at the University of Mary Washington and lead author, compared chemical attributes of present-day coral and older coral dating back 7000 years. From this investigative work, they could clearly see the ocean swings from “warm” to “cool” in association with the ENSO cycle. The swings were 25% stronger in the Industrial Age. Ok, Dr. Shepherd, but how do they know those coral analysis are accurate? The press release issued by Georgia Tech, where Grothe did her graduate work, provides the answer,

The evidence had slumbered in and around shallow Pacific waters, where ENSO and El Ninos originate, until Cobb and her students plunged hollow drill bits into living coral colonies and fossil coral deposits to extract it….The corals’ recordings of sea surface temperatures proved to be astonishingly accurate when benchmarked. Coral records from 1981 to 2015 matched sea surface temperatures measured via satellite in the same period so exactly that, on a graph, the jagged lines of the coral record covered those of the satellite measurements, obscuring them from view.

Grothe said, “When I present it to people, I always get asked, ‘Where’s the temperature measurement?’ I tell them it’s there, but you can’t see it because the corals’ records of sea surface temperatures are that good.”

What’s in store for the future of commuting?
A distant galaxy is flaring with strange regularity, and scientists have figured out why
The Pharma Industry Expects Covid-19 To Be Around For The Long Haul
Facebook blocks users from creating new events near White House, Capitol and state houses
Astronomers have identified another important aspect of planets that could host life