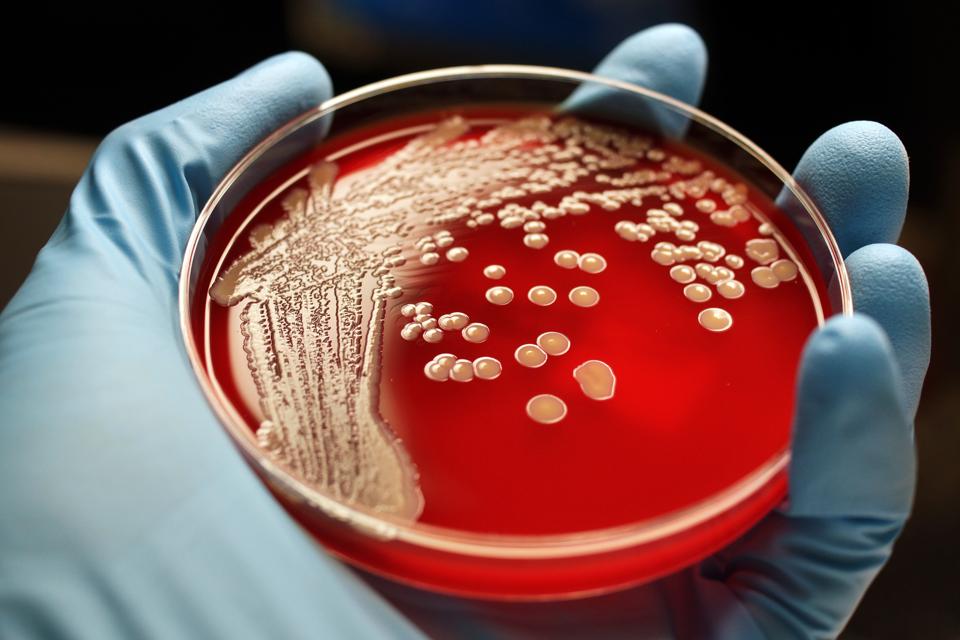 Scientists in Canada have identified a new compound which has killed even the toughest types of antibiotic-resistant bacteria in lab tests.

Antibiotic-resistant bacteria are a huge threat to public health, with around 120,000 blood-borne cases of one of the worst offenders, staphylococcus aureus (S.aureus) affecting patients in the U.S. annually, according to the CDC. Of these, around one-in-six people will die from the infection, mostly due to strains of the bacteria such as MRSA (methicillin-resistant S.aureus), which are resistant to all available antibiotics.

The new work led by researchers at McMaster University in Ontario, Canada was published today in Nature Chemical Biology.

The research team performed a ‘screen’ of 45,000 compounds to identify any that showed promise against fighting MRSA in lab tests. The compound they identified, MAC-545496, is particularly interesting because it doesn’t efficiently kill the bacteria or halt growth on its own like normal antibiotics, but when combined with a common class of antibiotic, it is incredibly potent.

“This antimicrobial has a very exciting mode of action, kind of like hitting many birds with one stone,” said Eric Brown, senior author of the paper and a Professor of Biochemistry and Biomedical Sciences at McMaster.

The researchers showed that MAC-545496 works to tackle the bacteria in several different ways. It makes MRSA more susceptible to attack from the immune system, renders it vulnerable to the action of several antibiotics again and also reduces the bacteria’s ability to produce biofilms.

“One way that S.aureus hides out from our antibiotics on artificial joints, heart valves etc is by making a biofilm, a mixture of proteins and nucleic acids that bacterium regurgitates around itself to make a cocoon and then makes a colony,” said Michael David, MD, PhD, Assistant Professor in the Department of Medicine at the University of Pennsylvania who was not involved in the study.

Biofilms act as a defensive shield from antibiotics, rendering the bacteria up to 1,000 times more resistant to antibiotics. Biofilms often form around artificial body parts such as heart valves or bone replacements and can be exceptionally hard to treat.

The new antimicrobial removes an important protein called GraR from MRSA, which helps the bacteria evade the immune system. It is the first time that a compound targeting this particular protein has been discovered.

Perhaps more importantly, the removal of GraR makes the MRSA susceptible again to antibiotics it was previously resistant to. Conversely, a strain of MRSA without GraR was resistant to the antibiotics when combined with MAC-545496, showing that the compound directly targets GraR.

“The most reasonable use of this compound is in combination with a beta lactam antibiotic and if I were a patient that’s what I would want. Its just a lead right now, but these pathways have never been targeted before and it identifies a new target in S.aureus so it really is quite novel,” said Brown.

Beta-lactam antibiotics, named so because of their molecular structure, are very commonly used and include penicillin derivatives like methicillin (the M in MRSA) and cephalosporins.

The research team used MAC-545496 combined with a beta-lactam antibiotic to kill MRSA in a dish and also did in tests in worm larvae, finding that the combination was able to fight the infection without killing the worms.

“We really need to make this molecule better. We need to make this compound more drug-like, mitigate against toxicity if there is any – we don’t have any toxicity data currently, but it was tolerated in the worm larva, which is a good sign. It is pretty early days,” said Brown.

So how does this molecule differ from other antibiotics in existence?

“GraR is part of a system in S.aureus that senses damage to the bacterial cell wall and turns on a whole variety of other genes and proteins that are involved in virulence, i.e. making s.aureus nastier when it causes an infection,” said David.

Many efforts to produce more powerful antibiotics to directly kill bacteria have proven unsuccessful, so MAC-545496 represents a new strategy of trying to re-sensitize the bacteria to existing antibiotics that are already approved and known to be safe in humans.

“The problem is that currently the prevailing strategy to treat antibiotic-resistant organisms has been to use more and more powerful antibiotics,” said Bruce Y. Lee, MD MBA, Professor of Health Policy and Management at the City University of New York (CUNY) “These tend to be broad-spectrum antibiotics, meaning that they can kill or at least inhibit a wide range of bacteria including the beneficial ones,” said Lee mentioning that these types of anti-microbials may also increase the likelihood of bacteria becoming resistant.

“One possible strategy is to target specific things that help bacteria be resistant to antibiotics or cause infections, because then you are making the treatment much more specific. This new work is an example of that strategy, finding a particular compound that can reverse resistance to a class of antibiotics,” said Lee.

This work is undoubtedly promising and because it targets GraR to make bacteria more susceptible to existing antibiotics, represents a new potential way to fight superbugs like MRSA. However, there are a considerable number of experimental and regulatory steps which need to be completed before this compound can even enter into human trials.

“So what they have to do now, is what all new drugs have to go through which is extensive testing in models of mammalian infection – rats, mice. There’s a long process of human clinical trials that it will have to go through and it will take many years, but its very exciting,” said David.

These tests will include seeing whether MRSA can easily become resistant to MAC-545496 too and hence whether the compound has a real future as an anti-microbial drug.

“If anyone tells you they have a chemical compound that bacteria can’t get resistance to, is either blind or naïve. We won’t know with this compound until we do further tests in animal models,” said Brown.

6 VCs share their bets on the future of work
IEA says the coronavirus crisis has set in motion the largest drop of global energy investment in history
Dear Sophie: Can I work in the US on a dependent spouse visa?
In lean times, fierce dinosaur Allosaurus resorted to cannibalism
New material could be used to make a liquid metal robot – Physics World