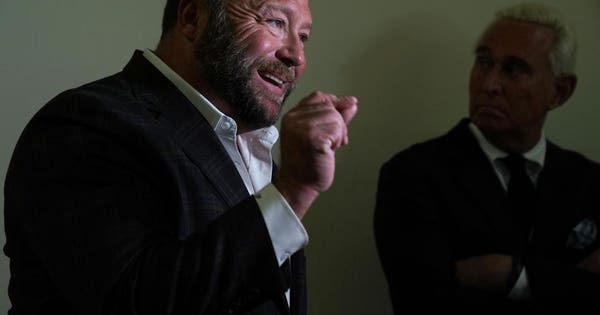 Alex Jones has made a lot of claims, some of which I have detailed previously for Forbes. Now he’s making claims about some of his claims. And these claims included claims about his own mental health.

He had previously claimed that the 2012 Sandy Hook Elementary School mass shooting wasn’t real but instead staged to promote gun control. Family members of people who actually died in the tragic event have not taken too kindly to such claims and subsequently filed lawsuits against him. As part of the Scarlett Lewis versus Jones suit, the law firm of Kaster, Lynch, Farrar, and Ball LLP recorded and released a three-hour video deposition of Jones. In other words, his claims resulted in legal claims against him, which in turn has led Jones to make claims about why he had previously made such claims. Are you following all this?

In case you have a spare three hours in your day, here’s the first part of his deposition:

And the second part:

As you can see, Jones said that he “almost had like a form of psychosis back in the past where I basically thought everything was staged, even though I’m now learning a lot of times things aren’t staged.”

Well, I’m just saying that the trauma of the media and the corporations lying so much, then everything begins ― you don’t trust anything anymore, kind of like a child whose parents lie to them over and over again, well, pretty soon they don’t know what reality is. So long before these lawsuits I said that in the past I thought everything was a conspiracy and I would kind of get into that mass group think of the communities that were out there saying that. And so now I see that it’s more in the middle. All right? So that’s where I stand.

Psychosis isn’t a word that should be used lightly. It isn’t equivalent to saying that you made a mistake or weren’t quite sure of the facts. Would you tell your boss, “oh, I couldn’t complete that assignment because of psychosis” or explain to your date that, “my dating profile wasn’t accurate due to psychosis”?  The U.S. National Library of Medicine states that “Psychotic disorders are severe mental disorders that cause abnormal thinking and perceptions. People with psychoses lose touch with reality.” The two main symptoms of psychotic disorders are:

For example, you may believe that you are the greatest leader ever, even when no evidence really supports that line of thinking. Would that necessarily be a delusion or are you just being overconfident, oblivious, a doofus, or a douchebag? Well, it’s complicated. Overestimation of one’s own leadership abilities is quite common. However, a real delusion is a mental health diagnosis. There are real validated tests such as an official mental status exam (MSE) that can help a mental health professional determine whether you are having delusions and suffering from psychosis. By contrast, douchebag is not an official mental health diagnosis. There is no official and validated douchebag status exam (DSE).

Classifying something as a delusion depends on the degree to which you hold on to a belief, despite mounting evidence to the contrary, and the type of belief as well as an evaluation of your general patterns of thinking. There are certainly situations where delusions are very obvious, such as when someone thinks he or she is Superman or Supergirl and tries to fly off a building. But there are also many, many beliefs that people hold onto that don’t officially qualify medically as delusions but are contrary to the facts. For example, many racist and sexist beliefs are not consistent with reality. Not all of them are medically classified as delusions. The same goes with believing that the Cleveland Browns will win the Super Bowl next year, although the consequences of such a belief are not quite the same holding racist and sexist beliefs.

Moreover, a psychosis is a condition where there is a general break from reality, not just a single belief or single altered perception. True untreated psychosis can be very dangerous to both the person who is suffering and others. You don’t just say about your co-workers or friends, “oh, that person over there? He or she is suffering psychosis. We are just waiting for it to to pass or maybe a latte will help.”

If you suspect someone of having psychosis, then that person needs to see a mental health professional as soon as possible. A mental health professional is necessary to determine whether it is actually psychosis, what caused it, what is the potential for harm, when might it arise again, and what treatment is needed. Medline Plus includes a list of potential causes of psychosis such as schizophrenia, major depression, bipolar disorder, dementia, mind-altering drugs, HIV infection, and stroke. Note that this list does not include the media.