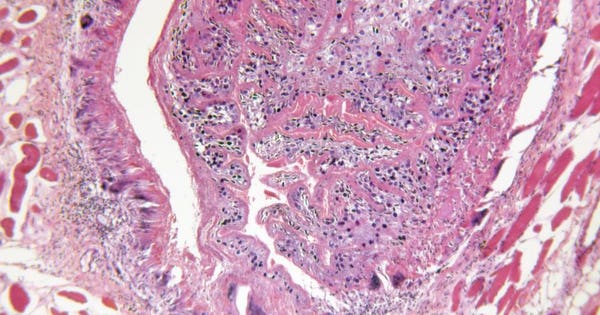 This is a microscopic photo of cysticercosis in a pig: a baby pork tapeworm forming a cyst in the muscle of a pig. (Photo: Getty Images)

The New England Journal of Medicine published a case of an 18-year-old man who had all that. He had had a week of pain in his right groin and then went to the emergency room after suffering a seizure. He was confused, had swelling over his right eye, and had a tender right testicle. Magnetic resonance imaging of his head showed this:

No, it is not normal to have all those white spots in your head. Each white spot is a cyst, created by the larvae of Taenia solium, otherwise known as the pork tapeworm. Using ultrasound, the doctors also found cysts in the patient’s eye and testis. If you must “in cyst” on knowing the medical term for this condition, it’s cysticercosis. Cysticerci are these cystic lesions formed by the young-uns of the pork tapeworm. Neurocysticercosis is when these lesions occur in the brain. These cystic lesions can cause inflammation and damage to the surrounding areas. If its in the brain, these can damage the brain, leading to a variety of neurological symptoms. If its in the testes, ouch.

In some cases, you can use anti-parasitic medications to try to kill these parasites. However, when the parasites get damaged and die, they can cause inflammation and fluid-formation in the area, sort of like how the vampires getting killed in the movie Lost Boys isn’t clean and pretty. Since there were so many larvae in this man’s case, the doctors were worried that using anti-parasitic medications would cause too much inflammation and fluid formation that could then damage vital structures nearby like big parts of his brain. Thus, instead, the doctors just administered dexamethasone to reduce the inflammation and anti-seizure medications to prevent seizures. With so many parasites in his body, unfortunately, the patient died two weeks after first being seen at the emergency room.

If you are wondering how to get the pork tapeworm in your intestines, the name pork tapeworm is a giveaway. if you eat raw or undercooked pork that has cysticerci (i.e., the cysts with the young parasites) in it, those parasites can then attach to your intestine walls. There, they suck. That is, they slowly suck your blood while growing larger and laying eggs. These eggs then pass through your poop to the outside world, contaminating with pork tapeworm eggs wherever you poop.

This is yet another reason why you shouldn’t poop in the kitchen or in a pig trough. Anyone, human or pig, who then eats these eggs can then eventually develop cysticercosis. This happens after the eggs hatch in the person’s intestines. The baby tapeworms subsequently burrow through the intestine walls, get into the bloodstream, and then use the bloodstream as a Metro subway system to get to different parts of the body, such as the brain, muscles, and the liver. Next, these babies burrow into the tissue and create the cysts. Depending on where they are location, these cysticerci may not cause any symptoms. So you could possibly have these baby parasites in your body for a long time without knowing it, which is a wonderful thought.

You can find cysticercosis throughout the world, although it is more common in lower income countries and seems to be relatively uncommon in the U.S. The Centers for Disease Control and Prevention (CDC) indicates that it is more common “where pigs roam freely and eat human feces.” How do you “re-cyst” or avoid pork tapeworm infections and cysticercosis besides telling pigs not to eat human feces? Well, don’t “drink water or eat food contaminated with tapeworm eggs” or “put contaminated fingers in their mouth,” as per the CDC. This means maintaining good sanitation and food safety standards. If someone may touch your food or drink, make sure that you insist the the person washes his or her hands frequently and thoroughly.  Otherwise, there’s a chance that you may result in cysts.