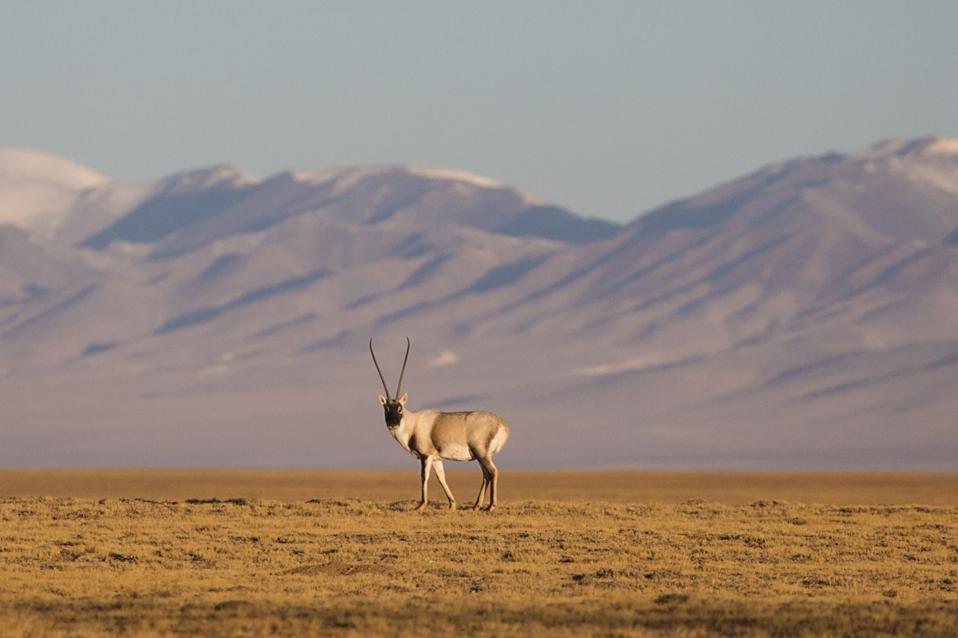 Tibetan antelopes live at high elevations where the partial pressure of oxygen is roughly half that at sea level — how do they do this?

When it comes to thriving under oxygen deprivation, the Tibetan antelope, Panthelops hodgsonii, is the true champion amongst mammals. Not only are these remarkable animals capable of sustaining running speeds of greater than 70 kilometers per hour (44 mph) for more than 100 kilometers (62 miles), but they do so at high elevations on the Tibetan Plateau where the partial pressure of oxygen is just half of what it is at sea level. How on Earth do they do this?

The Tibetan antelope is a medium-sized bovid native to the Tibetan Plateau. This is an arid high-altitude steppe in Central and Eastern Asia nestled between the Himalayan mountains and the Taklamakan desert. They live in open alpine and cold steppe environments and prefer flat, open terrain, with sparse vegetation cover. Despite its extreme environment, more than 230 species of wild animals live on the Tibetan Plateau, 20 of which are under Chinese state protection, including the wild yak, wild donkey, white-lip deer, brown bear and the endangered Tibetan antelope or chiru.

Elevations on the Tibetan Plateau range from 3600 to 5500 meters (11,811-18,045 feet) above sea level. On the Tibetan Plateau, the partial pressure for oxygen is two times lower than at sea level, meaning that oxygen molecules are further apart than at sea level because there is less pressure pushing them together. Thus, there are fewer oxygen molecules in each breath of air, making it difficult to get enough oxygen.

Some hemoglobin variants bind oxygen better than others

Hemoglobin is the iron-containing protein in red blood cells. Hemoglobin is made up of four folded globin protein subunits, each of which binds and carries an oxygen molecule from the animal’s lungs or gills and distributes it to the rest of the body.

A number of hemoglobin variants normally occur within species, each of which arose through a series of mutations. Although most mutations are detrimental, some can be adaptive. For example, some hemoglobin variants are more efficient at binding oxygen at lower pressures.

Different hemoglobin variants are regulated so certain variants are expressed at distinct stages of development. Most members of the cattle family (bovidae) express a fetal hemoglobin gene that has a higher oxygen affinity than the adult variant, which enhances oxygen transfer across the placenta to the developing fetus. But shortly after birth, this fetal hemoglobin variant stops being expressed. This raises the question: did the Tibetan antelope somehow change its expression pattern so its fetal hemoglobin is preferentially expressed in adults, thereby making it possible for them to live in the harsh high-altitude environment that is their home?

Losing the adult βA gene variant of the hemoglobin gene also deleted part of the developmental regulatory region that accompanied it, such that the juvenile hemoglobin variant completely supplanted the expression pattern for adult hemoglobin in the ancestor of the Tibetan antelope.

But does this juvenile hemoglobin variant bind oxygen better than the adult form? Using test tube experiments, Signore and Storz confirmed that Tibetan antelope hemoglobin does, in fact, have a much higher oxygen affinity than that of all other bovids. Further, the researchers calculated that the ancestor of the Tibetan antelope experienced an increase in oxygen binding affinity of 13.5% (i.e; ref). This certainly explains how these remarkable animals can run so fast and so far at altitudes that would leave humans faint and gasping for breath and barely capable of moving. Despite the obvious benefits of this hemoglobin variant, and despite there being 230 other animals also living on the Tibetan Plateau, the Tibetan antelope is the only mammal so far known to rely on a juvenile hemoglobin variant to help them survive at high altitudes as adults.

Mike Griffin joins board of Rocket Lab
How sustainability vets align their work-life identities
Oil edges lower after jump on U.S. stocks draw
How Did This Colombian Use Drones To Solve A Bee Mystery?
Why deforestation and extinctions make pandemics more likely