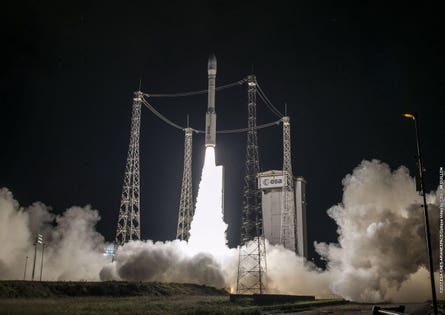 Everybody knows that rockets today are very different than 10 years ago. SpaceX regularly launches and lands rockets for multiple missions. Spacecraft are smaller and tend to fly in bunches. For a company like Arianespace, which was founded in 1980, this means a lot of innovation must happen very quickly.

Despite these challenges, analysts report that Arianespace had a strong 2019 so far, with an order book of 4.2 billion euros. It successfully implemented a 40% price cut to the Ariane 5 rocket to compete with SpaceX. It’s obtained a number of new contracts for its other launchers, which are Soyuz and Vega. Development for its new launchers (Ariane 5 and Vega C) appears to be on track.

What’s more, Arianespace is working hard to pick up customers outside of those who fly large, geostationary satellites — a fairly static market right now. Notable among these new wins is OneWeb, a satellite Internet provider; Arianespace launched six of its satellites simultaneously in February, just the first of a series.

Arianespace CEO Stephane Israel said in an interview that a large part of the company’s success this year has been moving away from the geostationary market. “From a commercial standpoint, the overall context of the geostationary satellite is quite slow; opportunities are more limited than they used to be,” he said.

He added that Ariane 6, whose reignitable engine allows for more diverse orbit opportunities for customers, is continuing to proceed well in its development and will offer more options for the market when it is ready to fly; the first test launch is scheduled for next year.

Arianespace had 11 successful launches in 2018, including this one in December of an Indian geostationary communications satellite.

“They’ve had a pretty successful year,” said Northern Sky Research senior analyst Shagun Sachdeva in an interview. She added the constellation launches are a “big plus” for Arianespace, and that so far the company has been capitalizing well on that segment.

What remains to be seen is how well the company will innovate with its new rockets, she cautioned. Since SpaceX already has its reusability infrastructure in place, it appears the Hawthorne, Calif-based company can more easily afford to go lower than its French competitor. “SpaceX can afford to get even cheaper, especially with [their] government contracts, but Arianespace has a limit to how low they can go,” she said.

Israel acknowledged that there is still a lot of work left to do on preparing Ariane 6. But it is meeting milestones so far; the engines have been tested, and the rocket is being manufactured.

He bills Ariane 6 as a more durable version of the Ariane 5, and one that can bring different satellites into orbit to meet “the evolution of the market.” Manufacturing costs are top of mind, with much of the assembly process now being done horizontally. This shortens a 30-day launch campaign in Guiana to less than 10 days

When it comes to holding their own in the marketplace, Israel said Arianespace has the advantage of a long history with commercial customers who have come to trust their work over the years. Arianespace is a subsidiary of ArianeGroup, which holds 74 percent of its share capital. The other 26 percent is held by 15 other shareholders from the European launcher industry.

The company released partial annual results in January summarizing 2018 and 2019 activities. The company’s order book is at 4.2 billion euros, representing 54 launches — 70 percent of those commercial, and the other 30 percent institutional. It reported 2018 revenues of 1.4 billion euros, on the back of 11 launches from the Guiana Space Center.