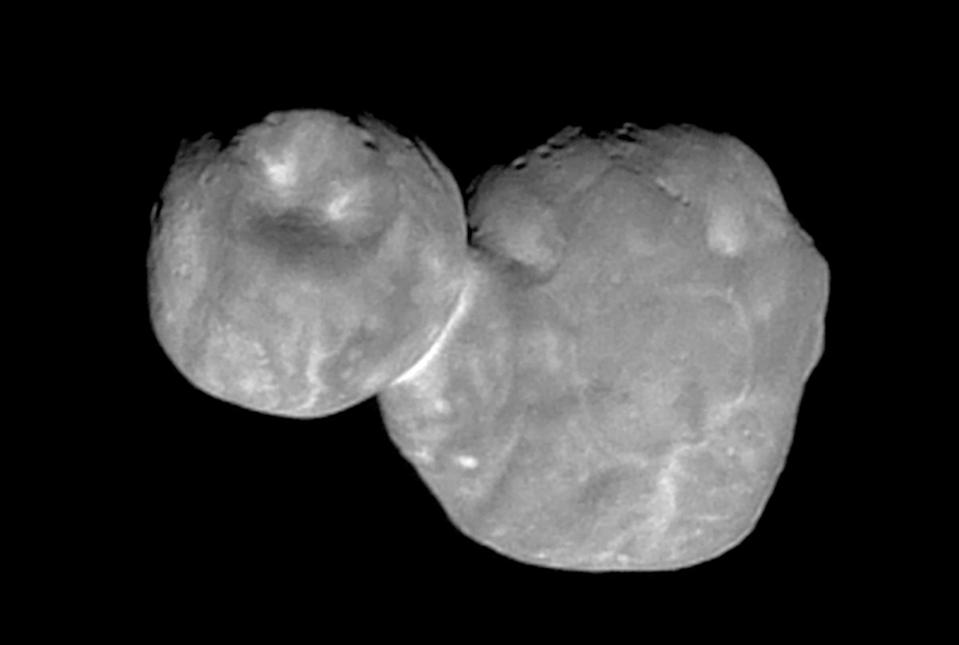 Most of the known objects in the solar system are named for Greek and Roman gods and mythical figures. But in the Kuiper Belt, astronomers are beginning to recognize a broader set of cultures, including indigenous groups.

In November, the International Astronomical Union renamed the bizarre planetismal Ultima Thule. The Kuiper Belt Object, which orbits the Sun about 4 billion miles away, is actually made of two rocky objects that smashed into each other sometime in the solar system’s past. They ended up stuck together, looking a bit like BB-8 from Star Wars. And their new name is Arrokoth – a Powhatan word meaning “sky.”

Arrokoth shares the Kuiper Belt with Haumea (a Hawai’ian goddess of childbirth), Huya (a Wayuu god of rain and winter), Makemake (a Rapanui creator and fertility god), Sedna (an Inuit sea goddess), Quaoar and Weywot (a Tongva creator god and his son), and others. Astronomers have discovered a panoply of new worlds on the outer reaches of our solar system in the last few years, and the pace of discovery will probably keep increasing once the Pan-STARRS and Large Synoptic Survey Telescope observatories are completed.

If the thousands of new worlds in the Kuiper Belt are small, cold, dark, and distant, they’re also intensely fascinating. They’re time capsules from our solar system’s earliest days, full of clues about how our solar system came to look the way it does. “Data from the newly-named Arrokoth has given us clues about the formation of planets and our cosmic origins,” said co-discoverer Marc Bluie of the New Horizons team. “We believe this ancient body, composed of two distinct lobes that merged into one entity, may harbor answers that contribute to our understanding of the origin of life on Earth.”

And many of them won’t be named for figures from Greek and Roman myth, but for indigenous ones.

Sedna is best known as the final nail in the coffin of Pluto’s planethood. When Caltech astronomer Mike Brown and his team discovered the dwarf planet in the early 2000s, it helped prove that a whole category of objects called dwarf planets existed, and Pluto fit better among the dwarf planets than among its larger kin. Sedna is also so far away that if you stood on its rocky surface, you could cover the Sun with the head of a pin held at arm’s length.

“Our newly discovered planet is the coldest, most distant place known in the solar system, so we feel it is appropriate to name it in honor of Sedna, the Inuit goddess of the sea, who is thought to live at the bottom of the frigid Arctic Ocean,” said Brown in 2004, when he and his team proposed the name. At the time, Brown also suggested that astronomers should make a habit out of naming other objects in the Kuiper Belt named for Arctic deities, for similar reasons.

That convention didn’t quite stick, but a few others did. Kuiper belt objects whose orbits don’t form a resonance with Neptune are typically named for creator deities, for instance. And unofficially, astronomers sometimes try to name objects in honor of the indigenous groups on whose land they’ve built their telescopes.

That’s why Quaoar – a dwarf planet 45 times further from the Sun than Earth – is named after a creator god of the Tongva people, who live very far away from the Kuiper Belt, in southern California. Quaoar, as its name suggests, is a non-resonant Kuiper Belt Object. And patches of water ice on its surface suggest that it might also have cryovolcanoes, because Kuiper Belt worlds are really interesting places.

And Haumea (whose dwarf planet status astronomers are still debating) is named for a Hawaiian goddess of childbirth, and its moons are named for the goddess’s daughters. The name is a nod to the cosmic collision that seems to have set Haumea spinning rapidly, and also broke off the chunks of rock and ice that eventually became Haumea’s moons. One of those moons, Hi’aka, is named for the goddess who protects the island of Hawai’i, where the Mauna Kea Observatory stands.

For Better And For Worse

Mauna Kea is the site of renewed conflict between (some) native Hawai’ians and (some) astronomers over construction of the Thirty Meter Telescope atop the mountain. Here’s the short version: astronomers and other proponents say Mauna Kea is the best site for the new telescope, whose scientific goals are important to all of humanity. Native Hawai’ians and other opponents say that Mauna Kea is a deeply sacred place, as well as ecologically vulnerable one – and that the observatory is also failing to provide fair compensation for its use of the site.

The issue, and the battle lines, are more complex (check out Ethan Siegel’s detailed explanation). But the conflict at Mauna Kea stands in stark contrast to Haumea and Hi’aka, out there in the Kuiper Belt. It’s tempting to take Haumea and its moons as a sign of hope, but in the years since its naming, the Mauna Kea conflict has only intensified.

Meanwhile, Arrokoth’s name is meant to honor the Powhatan people, whose traditional home is in the Chesapeake Bay region. The area is now also home to the Space Telescope Science Institute, which operates the Hubble Space Telescope, and the Johns Hopkins Applied Physics Laboratory, where the New Horizons mission is based. But here’s a crucial point: the New Horizons mission team, who proposed Arrokoth’s new name to the IAU, asked for – and received – permission from Powhatan tribal leaders to use the name. That gesture conveyed genuine respect for the tribe’s wishes, and a willingness to engage with indigenous people.

“We gracefully accept this gift from the Powhatan people. Bestowing the name Arrokoth signifies the strength and endurance of the indigenous Algonquian people of the Chesapeake region,” said Lori Glaze, director of NASA’s Planetary Science Division, at a ceremony announcing the new name. “Their heritage continues to be a guiding light for all who search for meaning and understanding of the origins of the universe and the celestial connection of humanity.”

What’s Really In A Name?

Naming a few distant worlds doesn’t undo the effects of centuries of colonization; it doesn’t alter the situation at Mauna Kea; and it doesn’t immediate fix the fact that only one indigenous American astronaut has flown in space. But symbols have power, and seeing indigenous names in the Kuiper Belt may help draw more indigenous students to engage with astronomy and space exploration; it may also draw more astronomers to engage with the indigenous cultures whose lands they stand on to look upward.

The rise in indigenous names are also a reminder that space belongs to everyone, not just English speakers with a background in European classical mythology. Some in the astronomical community have raised concerns about whether an English-speaking public can feel as comfortable with names like Quaoar and Haumea as they do with names like Mars and Saturn – but that misses the point.

Yes, English speakers who aren’t used to quite so many vowels in close quarters may struggle with Oumuamua (I still do). But many non-English spears around the world find that Oumuamua rolls trippingly off the tongue, but Greek and Latin sound bizarre and alien. Space belongs to everyone. Science belongs to everyone. If the English-speaking public can handle Alpha Centauri and Enceladus, then it can embrace Makemake and Arrokoth.