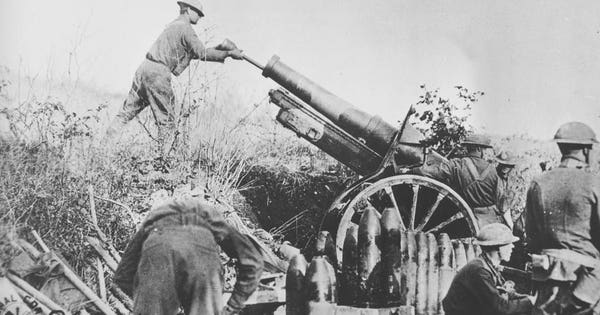 A U.S. artillery crew of Battalion A 324th Artillery, 158th Brigade, 29th Division, is operating a 155mm gun in position on a road just taken from the Germans in France, in this undated photograph, during World War I. (AP Photo)

When World War I broke out, an entire generation went to war, and that included the leading scientists of the day. By the end of the war, British and American units were pinpointing enemy artillery positions using an acoustic system designed by astronomers, medical researchers, and physicists.

From the beginning of the war, the British Army realized that it needed a better way to target the source of enemy artillery strikes and return fire. The Allies recruited astronomer Charles Nordmann, whose pre-war research had focused on the Sun’s radio emissions, and medical researcher Lucien Bull, who had been developing ways to record heartbeats when the war broke out, to lead the effort. In 1915, physicist William Lawrence Bragg — who shared that year’s Nobel Prize with his father, William Henry Bragg, for their work on x-ray diffraction before the war — joined the team and quickly took on a leadership role.

“Bragg encouraged the innovation that solved a lot of the practical problems,” said Dan Costley, a researcher in sound ranging for the U.S. Army Engineer Research and Development Center, in a recent statement to the press. “He was really good about giving credit to people on his team.”

It’s actually not hard to see how each specialist’s unique knowledge contributed to the final system, which could pinpoint the location of an enemy gun with a precision of about 10m, based on how long it took the sound from the gun’s firing to reach a line of microphones stretched out across the Allied side of the battlefield. Since sound travels through the air at a known speed, the difference in timing between two microphones allowed soldiers to calculate the distance from each microphone to the artillery emplacement — and then do a little high-school geometry to triangulate its position. The whole process took just a few minutes.

This is the recording unit of a French version of Bragg’s sound-ranging system, used in the 1920s.

To make the whole thing work, soldiers had to hide an array of microphones, connected by electrical wires, across a kilometer (0.62 miles) of battlefield. The microphones were actually repurposed ammunition boxes, each one wrapped in camoflage nettin to block wind noise, with a heated platinum wire stretched across its mouth. The low-frequency booming of the artillery caused vibrations in the air, which subtly cooled the wire and changed how electrical current flowed through it (its resistance, in technical terms), which caused a pulse of change in the electrical signal from the microphone, which would be transmitted through a complex array of wires to a roll of film, where the timing of the pulse would be recorded. Bragg’s team owed the microphone design to physicist William Tucker, a University College London lecturer who had joined the Army as a private at the beginning of the war; he received a commission in 1916 and eventually left the Army as a major.

British forces quickly adopted the design, and the U.S. followed suit in 1917. Germany, on the other hand, kept relying on human observers — which was slower, less accurate, and probably much more dangerous for the observers themselves — right up until the end of the war.