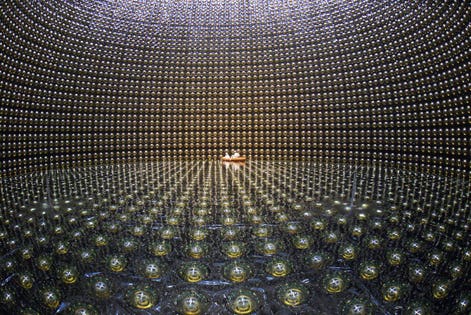 Since the discovery of radioactivity in the 19th century, humanity has been forced to reckon with an uncomfortable but sobering truth: much of the matter we find today will eventually decay away. This isn’t restricted to uranium, but affects a wide variety of elements and isotopes, including every element heavier than lead on the periodic table, each particle that contains a strange, charm, bottom or top quark, the muon and the tau particle, and even the neutron.

It’s enough to make one wonder whether the lightest “stable” composite particle that we know of — the proton — is truly stable after all, or whether it would eventually decay if only we waited long enough. Even though the Universe is only 13.8 billion years old, we can already confidently state that the proton is stable for at least some ~1034 years. Here’s how we got there.

Because of the various conservation laws of particle physics, a proton can only decay into lighter particles than itself. It cannot decay into a neutron or any other combination of three quarks. The decay must conserve charge, teaching us that we’d still need to have a positively charged particle in the end. We’d need to produce at least two particles, rather than one, to conserve both energy and momentum.

And finally, if we’re losing a baryon (something made of three quarks) in the Universe, we’d have to add an antilepton (like a positron or an anti-muon) to compensate for it and keep the Standard Model’s conservation rule: that the number of baryons minus the number of leptons must never change. This means a proton can decay into a positron and a neutral meson (like a pion), a muon and a neutral pion, or an antineutrino and a positively charged meson.

All of these decays will convert most of a proton’s mass into pure energy, via Einstein’s E = mc2.

Just from your own warm-blooded body, you can learn something fascinating about how stable the proton is. Considering that each one of us is made mostly of a mix of protons and neutrons, we can estimate for an average-sized human being that we have around 2 × 1028 protons apiece inside of us. And yet, in order to maintain our equilibrium temperature as mammals, a typical human has to output about 100 watts of continuous power.

If we ignored our biological metabolism and assumed that 100% of this thermal energy came from decaying protons, that would mean about 700 billion protons would decay each second inside each one of us. But given that the number of protons we have in us at any given time, that means just 1 in 30 quadrillion protons decays each second. Just from examining our own bodies, this translates into a minimum lifetime for the proton of about 1 billion years.

But we can do much, much better than that by conducting experiments designed to search for proton decay. If all you did was take a single proton and wait around for 13.8 billion years — the entire age of the Universe — you could determine that it’s half-life is likely longer than the total amount of time you waited.

But if you took something like 1030 protons and waited just a single year, if none of them decayed at all you’d be able to say it’s half-life is likely longer than 1030 years. If you gathered 100 times as many protons (1032) and waited for a decade (10 years) instead of just one year, you’d be able to conclude that a proton’s half-life was longer than 1033 years. In short:

the greater the restrictions you can place on the proton’s stability.

Theoretically, there are good reasons to expect that the proton might be fundamentally unstable. The biggest one is this: the fact that the entirety our Universe appears to be made of matter and not antimatter. Everywhere we look, across the expanse of space, we see overwhelming evidence that every star, galaxy, cluster of galaxies, and even the intergalactic medium is made overwhelmingly of matter.

Antimatter is scarcely there to be found, consistent with it being produced only by high-energy processes that create equal amounts of matter and antimatter. Every scenario that we can concoct to explain this cosmic asymmetry requires the existence of new physics, with every one of them requiring the existence of new particles that will show up at very high energies. In Grand Unification Theories (GUTs), for example, the existence of new, super-heavy X and Y bosons are predicted, and they could solve the puzzle of our Universe’s matter-antimatter asymmetry.


E. Siegel / Beyond The Galaxy

The issue is this: in order to create a matter-antimatter asymmetry, you need a new particle. And the reactions required by that new particle must couple to protons in some way, teaching us that some combination of the proton’s mass (to some power) and the mass of this new particle (to that same power minus 1) corresponds to the proton’s theoretical lifetime. For most of the models we’ve concocted, that predicted lifetime works out to somewhere between 1031 and 1039 years.

In every liter of water, there are approximately 3 × 1025 hydrogen atoms, which means there are about that many individual protons as well. If you gathered a million liters of water and waited for a year, you could measure the proton’s lifetime in a meaningful way that began to push the bounds of what these GUTs and other theories (supersymmetry, supergravity, string theory, etc.) predict ought to be there.

Starting in the early 1980s, physicists sought to do exactly this. In an old mine in Japan, Kamioka, physicists constructed an enormous tank filled with liquid, complete with all the protons you’d hope for. They shielded the tank from cosmic rays, radioactive material in the Earth, and any other source of noise they could think of, all while lining the tank with enormous numbers of photomultiplier tubes.

If any of the protons decayed, they’d produce charged particles (either positrons, antimuons, or pions) along with additional decay products (such as photons or showers of electrons) that would produce a light signal that could be seen by these photomultiplier tubes. For years, this experiment ran looking for proton decay: the Kamioka Nucleon Decay Experiment, or KamiokaNDE.

Of course, it didn’t detect any proton decays. However, in 1987, something spectacular did occur: a supernova went off just 168,000 light-years away in the Large Magellanic Cloud. Before even the light from this event arrived, the neutrinos that were produced in the collapsing core of this star showed up, and interacted with the atomic nuclei in this enormous tank. (As well as other, similar experiments around the world.)

The experimental setup, including the photomultiplier tubes, that were optimized for detecting a decaying proton were also extremely good at detecting neutrinos. While the proton didn’t decay, neutrinos really do exist and interact with large enough collections of matter. KamiokaNDE, the Kamioka Nucleon Decay Experiment, was rebranded as Kamiokande: the Kamioka Neutrino Detector Experiment. It was subsequently expanded multiple times, and remains — along with IceCube, SNOLAB and others — among a handful of world-class neutrino observatories.

But the limits on proton decay have grown progressively more stringent as time has gone on. Recent analyses of data from the 2010s have placed lower limits on the lifetime of a proton that now exceed 1034 years, from both positron and anti-muon decay channels. The simplest GUTs, such as Georgi-Glashow unification, have been thoroughly ruled out unless the Universe is both supersymmetric and contains extra dimensions, while even those scenarios are predicted to fall later in the 2020s.

The only unexplored “loophole” could be that truly free protons are actually quite rare, as we typically find them bound together in heavier nuclei, molecules and atoms. A “free proton” in a hydrogen atom still has about 0.000001% less mass than a proton without an electron bound to it. While a free neutron decays in about 15 minutes, a neutron bound together in a heavier nucleus can be eternally stable. It’s possible that the protons we’re measuring, because they’re not completely free, might not be indicative of the true proton’s lifetime after all.

There is no arguing, however, that in all our endeavors to measure the stability of the proton, we’ve never observed even one event of a proton spontaneously decaying into lighter particles and violating the conservation of baryon number. If the proton is truly stable and will never decay, it means that a whole lot of proposed extensions to the Standard Model — Grand Unification Theories, supersymmetry, supergravity and string theory among them — cannot describe our Universe.

Regardless of whether the proton is truly stable forever and ever or “only” stable for a septillion times the current age of the Universe, the only way we’ll figure it out is by performing the critical experiments and watching how the Universe behaves. We have a matter-filled Universe almost completely devoid of antimatter, and nobody knows why. If the proton turns out to be truly stable, many of our best ideas for what could cause it will be ruled out.

The secrets of nature may remain a mystery for a little while longer, but as long as we keep looking, there’s always the hope of a new, revolutionary discovery.