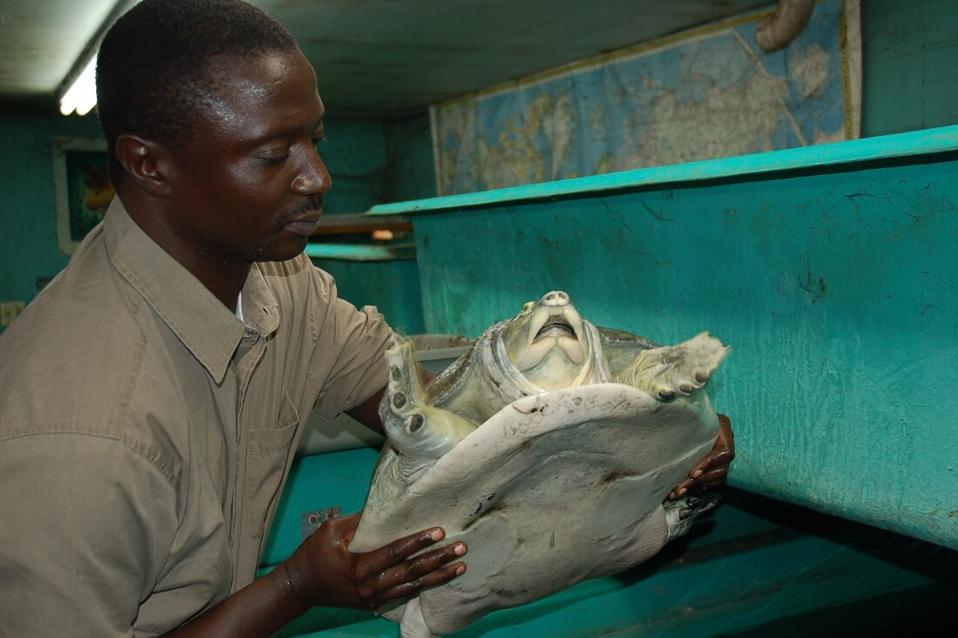 In late November, Tomas Diagne a turtle biologist from Senegal received a big surprise in a theater in London – he had just won the 2019 Tusk Award for Conservation in Africa, presented by Prince William.

According Diagne says that winning the award and meeting the second-in-line to the British throne was not the crowning achievement of his more than 20 year career working with turtles in Africa.

“This recognition shows that we are on the right path, but there is still a lot of work to do.”

Diagne says the £20,000 ($US 26,000) prize will go towards African Chelonian Institute, which he founded and is a learning and research center for various turtle species in West Africa.

According to Diagne, his journey to turtle science started early on in his life.

“I grew up in a family with animals, we had turtles and tortoises. I didn’t think I would be a turtle biologist, but I met the right people at the right moment.”

By 23, he had already founded a non-profit aimed at rescuing Sulcata tortoises. The captive breeding and release program is still going on today in Noflaye, Senegal.

Diagne says the Tusk prize money will also go a long way to help a new program at the Institute which involves inviting rangers and other wildlife officials from across West Africa, to come to Senegal for training for turtles and tortoise conservation.

This is vital on a continent with so much charismatic wildlife, because many turtles and tortoise species are sometimes overlooked.

Even if we have protected areas, the turtles are neglected in the monitoring system,” he said, “A ranger might go out and record mega-fauna like a lion or buffalo, but they don’t give much attention to turtle and tortoise. ”

“I see so many people who say they dislike snakes or crocodiles – they don’t want anything to do with these animals, they think they are dangerous,” he said.

“I have never met someone who dislikes turtles, but they don’t know much about them. They think they are cute.”

But they aren’t just cute – he says turtles and tortoises are vital parts of their environment.

“For tortoises, seed dispersal is a major role in the ecosystem, they help to deseminate 12 species of trees here in Senegal.”

For their part, sea turtle have two roles.

“They maintain sea-grass beds, they feed on them and help the new leaves to be stronger and more prosperous, “ he said, “They can also lay more than 300 eggs.”

“When their hatchlings come out, they don’t have their mothers, so the predation rate is high, but it is going to feed lots of other animals, including fish – so if they disappear, a lot of other species could disappear too,” he said.

According to Diagne, due to a quirk of reproductive biology, many turtle species are going to be impacted by climate change.

“A study in the Cabo Verde Islands, where you have the third largest population of Loggerhead turtles, shows the current ratio of males to females is 50:50, but with rising temperatures, that’s going to change,” he said, “The higher the incubation temperature, the more females you get.”

“We try to do our best is to promote scientists, and to get students to do their own research and to get them published,” he said, “Conservation is about trying to mitigate the human impact – and people who are living in the home range have more ability to understand how we can connect people to the species we want to conserve.”

Related: How Do You Map Africa’s Mischievous Manatees?

Diagne isn’t the only accomplished scientist in his household. His wife, manatee biologist Lucy Keith-Diagne is founder and director of the African Aquatic Conservation Fund in Senegal.

The pair met at a sea turtle biology conference and now both live in Senegal.