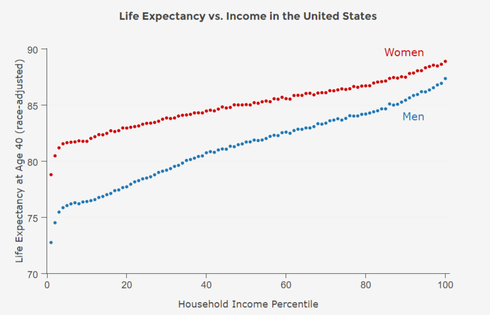 Hard as it is to believe, for the first time the life expectancy for Americans (not counting  the effect of wars) has dropped for two consecutive years. Perhaps less hard to believe is that this is not true across economic levels. The richest Americans are gaining in longevity, indeed to unprecedented levels. The poor don’t have it so well, and in the U.S., this includes the shrinking middle class, who are also dying earlier. With the widening income gap, there’s a growing discrepancy between life expectancies for the rich and poor. Depending on geography, those on the lower end of the income bracket spread can expect to live 20 years less than their better-off counterparts, a shocking finding from an in-depth study coming out of the University of Washington.

We’ll get into why this is, but this recent reversal of life expectancy for the poor should cause us grave concern. Given that this problem is rooted in personal finance, we pose the question: Can life expectancy win a few years back through an injection of inclusive capitalism?

Inequality in economics, and our ongoing debate about inclusive capitalism versus exclusive wealth, have led us into the territory of life and death. Literally.

Population data is telling us that the gap in life expectancy between rich and poor is widening, both in the U.S. and the U.K., with rich Americans living up to fifteen years longer than their poorer peers.  And while actuarial science can be dismal, it offers crucial insights into what does and doesn’t work in our economic system. We must be doing something wrong: in the States, while lucky residents of wealthy Chatham, North Carolina can expect to live past the age of 97, those in Stilwell, Oklahoma—a heavily Native-populated town—only get 56 years, more than 4 decades less on the planet. Similarly, in the Scottish city of Glasgow, life expectancy in the Lenzie district is 82 years, while ten minutes’ drive away in Calton it is just 54.

It was a successful capitalist system that created the opportunity for longer life. We now need an inclusive capitalist system to further spread these gains. The causes of the recent widening of the longevity gap are many, varied and disputed, but the dip in U.S. life expectancy is really about inequality. This manifests itself through diet and obesity, lack of access to healthcare, substance abuse and mental ill-health. It cannot be the job of capitalism to rescue every last addict or all over-eaters from themselves—these are social problems which are rightly the preserve of social policy—but there are positive contributions that businesses can make.

Take obesity, for example. A quarter of the U.K.’s population is obese, and we are catching up fast with the U.S. where this number has risen to a third in the last decade and a half. It’s a medical truism that diabetes and bowel cancer often follow obesity; and it’s equally well known that all of these conditions are preventable with better diet and exercise. How can these preventive regimens be put at the service of less wealthy people? In the absence of government leadership in this area, inclusive capitalism can step in, in the form of businesses funding research into healthier alternatives, incentivizing better lifestyles by marketing healthier foods and low-sugar drinks, varying insurance premiums based on lifestyle, incorporating gym memberships and step-counting apps into bundled product offerings, and so on.

While this may sound like I’m suggesting that companies give handouts to the poor, this is something closer to drawing in less wealthy populations by offering more options. Indeed, looking at economic theory, if business creates more healthy competition by backing better and broader solutions, prices should come down, giving more people more choice at lower entry-level points. With more options competing with each other, prices will eventually come down. It is also in businesses’ best interest to do so: we surely want our paying customers to live longer.

With that in mind, let’s look at how inclusive capitalism might help provide access to healthcare—an area which, in the U.S., has never been as unequal nor as orphaned by government support as it is today. While in the U.S. public-private cooperation isn’t on the cards, the environment is also less regulated, meaning it’s easier for companies to enter the field. Funding the development of pharmaceuticals and biosciences is a classic capitalist activity: it involves investing to back an idea, enlisting a team of experts, and taking risks.

Medical science has never been as exciting as it is today, as we move from generic drugs which tackle symptoms, to individualized genomic therapies which prevent conditions from arising in the first place. There is a huge role for inclusive capital-backed technology, AI and digital apps in the management of chronic conditions such as diabetes, cognitive impairment or dementia. And while no one has yet convincingly tackled mental health, many are trying, for example through online Cognitive Behavioral Therapy and workplace-based applications.  If one succeeds and can be scaled, this branch of medtech will create enormous value while also broadening access to affordable medical treatments.

Employing inclusive capitalism, we can also invest, privately or alongside governments, in backing primary healthcare that enables these benefits to be shared across a wider population. Prices for vital services need to come down if we are to bridge the life expectancy gap. And remarkably, this type of investment becomes a win-win for business and government, as well as for the population at large. While generating a return for companies, it also represents a potential savings for government that can consequently benefit from lower medical and/or social security costs.

To return to life expectancy, what we are seeing alongside the worrying opening of a wider gap between rich and poor is a simultaneous phenomenon where there are fewer young people and more older people. Census data tells us that seniors will soon outnumber children for the first time in U.S. history. Even those well-off older people who are living longer are doing so in less good health and with greater care needs.  More complex family structures and greater geographical dispersion make it harder to find people to do the caring. Better communications can help fill the gap by reducing loneliness, while social prescribing and activity-matching can improve well being (recent research, perhaps predictably from Finland, even suggests saunas can hold back Alzheimer’s).  Here is another opportunity for care-tech entrepreneurs to deliver both social and economic value. We have created ever-faster ways to deliver pizza, but not elderly care, although many are trying in the West, China and Japan. It is another way inclusive capitalism can address an area where we’ve only just scratched the surface.

In order to succeed, inclusive capitalism needs to reach all socioeconomic strata, all age groups, all cultural, ethnic, and other groups. Governments and society will benefit if business invests with these intentions in mind. There is clearly a significant market for those prepared to adopt the lessons of societal health and longevity. And through inclusive capitalism, there will be broad returns across the entire spectrum.