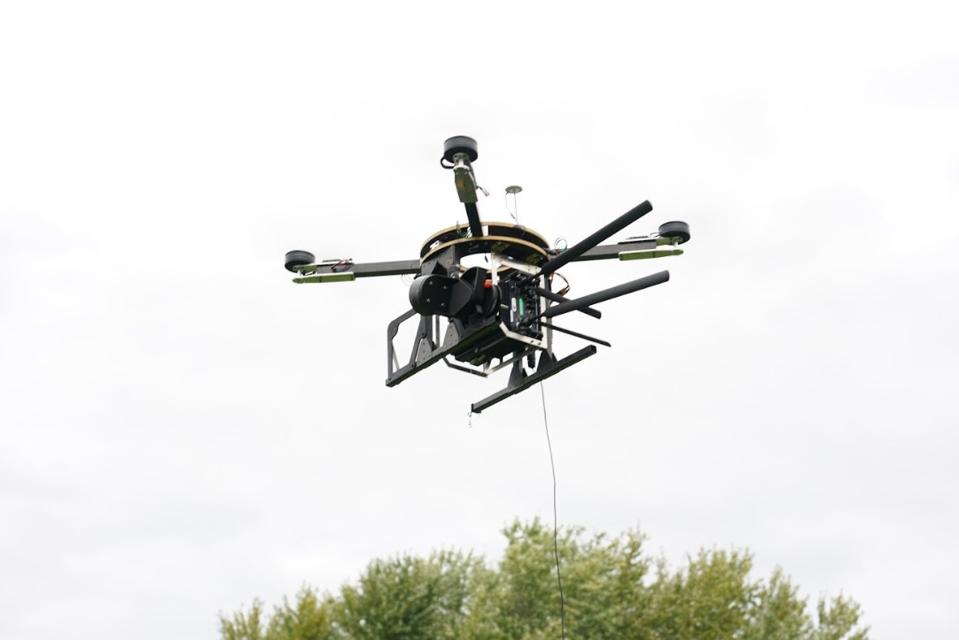 What did you do on your last long, boring summer? Minnesota-based engineer and entrepreneur Rahul Tiwari got bored – and two years later has a company called Spooky Action with the goal of providing drone-based cell phone towers, especially in the global south.

From June to August of 2017, Tiwari had a summer break from his studies at Purdue University and came across a rather niche problem: Anti-poaching efforts in Africa were being hampered by the fact that both human pilots and regular drones were limited in how long they could be in the air.

According to Tiwari, the answer was a tethered drone – which could stay in the air for hours.

“Instead of 20 to 30 minutes of endurance, our drone could stay up for six hours at a time, tethered to a vehicle.”

After that successful experience, he dropped out of Purdue and spent a year and a half in a basement lab figuring out to turn his proof of concept prototype into a fully-fledged product – that product is now the flying watchtower model called “SuperFly”

But without cell phone coverage, it is hard to get data to where it is needed in a timely fashion. Before long, Tiwari’s startup wanted to give drones a new place and task: hovering almost permanently, providing cell phone coverage.

Tiwari says in place of those towers, drones the size of dining tables can provide LTE coverage, use about as much energy as a microwave oven and be connected up to solar panels on the ground.

“We can cover 20-30 square miles with a drone that size,” Tiwari said, “And they can stay in the air for a month at a time thanks to their tether.”

According to Tiwari, having a drone above your town or village isn’t the noise-pest you might assume – Drones scale negatively, so as drones get bigger, they produce less sound.

Even if this concept sounds like science fiction, the proof is already in the pudding – in November, one of the TeleLift drones was providing high-bandwidth mobile internet coverage of a wind-surfing competition in France.

“We had winds of up to 40-50 knots, which was too strong for the windsurfers, but was no trouble at all for the drone,” Tiwari said.

Lightning, however, is still a problem – but the drones can be hauled down in a hurry if need be.

According to Tiwari, the portability is another advantage of a drone over a traditional tower.

“Imagine a town that can be covered with five drones,” he said, “But if everyone goes to work, the drones can be redeployed closer to where the people are and move back to the residential areas at night.”

“You can land and take off based on need – if there’s no demand, you can keep them on land,” he said.

The Spook Action drones are part of a growing trend of innovative drone used in Africa.

Related: How Do You Fight Malaria In Tanzania? With Drones!

At the time, Bart Knols, a medical entomologist and one of the co-founders The anti-malaria drone (AMD) project said the field trials were the culmination of years of effort to use drones to help fight malaria.