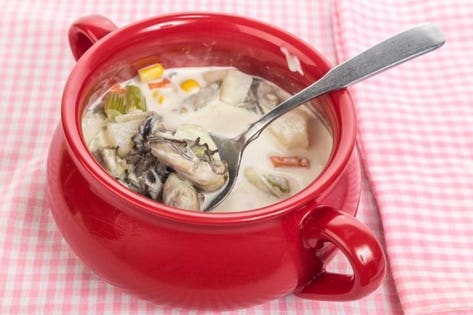 On Christmas Eve, households across the Southeast U.S. will be serving up oyster stew (many New England households serve it up for Thanksgiving). This dish used to be so common that oyster crackers likely get their name because such crackers are often served with oyster stew. This stew has its roots in Indigenous dietary preferences, Catholic customs that Irish immigrants brought to the U.S., and 19th century mailing conventions.

When English settlers arrived on eastern U.S. shores, they encountered shell mounds created by Indigenous peoples that had been consuming native oysters for thousands of years (Native peoples in the Pacific Northwest also consumed oysters for food). Many of the early deeds and treaties that colonists made with Native peoples included provisions ensuring access to oyster beds in the Natives’ fishing grounds.

While it’s not clear how many of the colonizers’ oyster-related culinary decisions were derived from the Indigenous people whose lands they occupied, the settlers certainly learned to indulge in the shellfish themselves. Consumed by all socioeconomic classes, oysters were seen as a versatile ingredient that could be eaten raw or integrated into roasts. In fact, they were so ubiquitous and popular across the Eastern seaboard that 700 million oysters were harvested in 1880 alone.

However, transporting oysters inland and to Southern states was challenging because seafood could not be easily refrigerated in the 1800s. Thus, oysters were most widely available in winter months (starting in December), when the weather was cool enough to prevent seafood from spoiling while traveling. Enveloped in seaweed and wet straw, oysters could be transported for up to two weeks without decaying. This seasonal window meant that oysters gradually became associated with Christmas.

When Irish immigrants arrived in the mid-1800s - many of whom were escaping the Great Irish Famine – they brought with them rigorous Catholic diets. One of their traditions was abstaining from eating meat on Christmas Eve. In their native Ireland, they would have eaten a stew with milk, butter, pepper, and dried ling fish. In America, the Irish substituted ling fish with oysters, which shared the ling fish’s briny flavor (ling fish was preserved with heavy amounts of salt).

These days, oysters continue to be consumed around the country, but they are no longer harvested from the natural environment. Wild oysters are in decline around the country and Chesapeake Bay populations have dwindled to 1% of their historic size. This has had severe consequences for wildlife in the Bay – not only do oysters help regulate water quality by consuming the microscopic algae, but they also form intricate reefs that provide critical habitat for many other plants and animals.

Conservationists are now using archaeological records of oysters harvested by historic Indigenous populations to understand how they were able to consume oysters without entirely exploiting them. It seems that Native Americans around the Chesapeake Bay were able to maintain oyster populations at relatively large sizes for thousands of years by hand-harvesting the oysters; oysters decreased to their current small sizes and their populations crashed only after European settlers began overharvesting them. Luckily for oyster lovers today, the delicious shellfish is farmed along the east and west coasts of the U.S.

So, as you tuck into your Christmas Eve dinner, please remember the oyster and the cultural importance it holds beyond being a culinary delicacy.

Physics in the pandemic: ‘Our habit of combining theory and experiments was an advantage for the lockdown’ – Physics World
Women of science posters for you to colour, marshmallow LINACs, iridescent chocolate – Physics World
Virgin Orbit sets expectations for first launch
With BuzzFeed’s new feature, you can take a Quiz Party with friends
As summer driving season kicks off, it’s unclear just how many people will take to the road