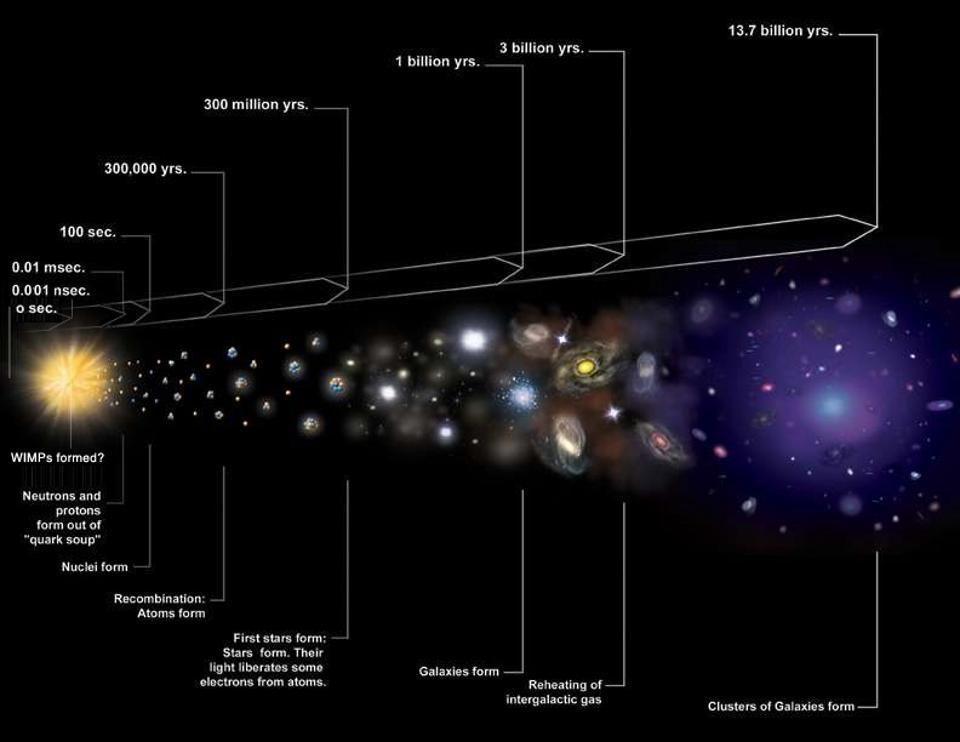 About 100 years ago, we began to truly understand the nature of the Universe for the very first time. The grand spirals and ellipticals in the sky were determined to be enormous, distant collections of stars well outside of the Milky Way: galaxies unto themselves. They were receding away from us, with more distant galaxies exhibiting faster recession speeds: evidence that the Universe was expanding. And if space is expanding today, that means the Universe was smaller, denser, and even hotter in the past. Extrapolate back far enough, and you’ll predict that the Universe began a finite amount of time ago in an event known as the hot Big Bang.

If the Universe was hotter and denser in the past, but cooled, that means there was once a time where neutral atoms couldn’t form, because things were too hot, but then did as the Universe cooled. That leads to a prediction of a now-cold, but mostly uniform background of radiation: this was discovered in the 1960s, validating the picture of the hot Big Bang and ruling out many alternatives. But there’s an entirely independent way to validate the hot Big Bang: by the nuclear reactions that must have occurred when the Universe was just minutes old. Those predictions are imprinted in the hydrogen gas throughout our Universe, and help us understand the Big Bang as never before.

If we were to go back to the very early stages of the hot Big Bang, to when the Universe was just a fraction-of-a-second old, we’d see a very different Universe from the one we recognize today. There were lots of free protons and neutrons, at temperatures and densities greater than we find in the Sun’s core. But there were no heavier nuclei, as the photons that were around at the time were so energetic that they’d immediately blast a heavier nucleus apart. In order to stably form them, we’d have to wait for the Universe to cool. As time went on:

Once the Universe cools enough to pass this “deuterium bottleneck,” nuclear fusion of these light elements can finally proceed unabated.

But by the time that 3-to-4 minutes have passed since the hot Big Bang, the Universe is a lot cooler and less dense than it once was. Temperatures are still high enough to initiate nuclear fusion, but the density — due to the expansion of the Universe — is only about 0.0000001% of what it is in the Sun’s center. As a result, most of the neutrons that still remain wind up combining with protons to form helium-4, with a small amount of helium-3, deuterium, tritium (which decays to helium-3), and isotopes of lithium and beryllium (which eventually decay to lithium) also remaining.

What’s remarkable about these predictions is how little they depend on. Given the Standard Model of particle physics, and how nuclear processes are known to work, there should be a particular ratio of the light elements that survive today dependent only on the ratio of baryons (protons and neutrons combined) to photons. Even completely independent of the radiation from the Cosmic Microwave Background, measuring the relative abundances of the light elements will tell us what the total amount of “normal matter” present in the Universe must be. In particular, we can see that measuring deuterium’s abundance, particularly if we can measure it precisely, will reveal to us the baryon-to-photon ratio of the Universe.

The problem, of course, is that these are predictions for what the Universe was born with, but that’s not the Universe we see today. By the time we get to the stars and galaxies we can observe, the normal matter that exists has gone through processing: stars have formed, lived, burned through their nuclear fuel, transmuted light elements into heavy ones, and have recycled those processed elements back into the interstellar medium. When we look at stars today, they don’t exhibit these predicted ratios, but significantly altered ones. In addition to these light elements, there are also heavy ones showing up ubiquitously, like oxygen, carbon, and iron, among others.

In a Universe without pristine stars, how could you possibly try and reconstruct how much deuterium was present immediately following the Big Bang?

One method you might consider is to measure the ratios of elements in a variety of stellar populations. If you measure, say, the oxygen-to-hydrogen or iron-to-hydrogen ratios, and also measure the deuterium-to-hydrogen ratio, you could graph them together, and use that information to extrapolate backwards: to a zero oxygen or iron abundance. This is a pretty solid method, and gives us an estimate for how much deuterium would be present at a time before heavy elements, like oxygen or iron, had formed.

But ideally, you’d want to probe the deuterium abundance directly: in as close to a pristine environment as possible. If you’ve already formed stars, you’ve probably both made and/or destroyed deuterium via nuclear processes, which throw your conclusions into doubt. Ideally, you’d want to find gas that was as close to pristine as possible, without the associated pollution of the stars themselves. You’d want to get high-precision measurements of clouds of gas — ideally very far away, corresponding to very far back in time — with no stars in them at all.

This seems like an impossibility, until you realize that clouds of gas can absorb light, imprinting their unique signature onto it. The brightest, most luminous light sources from the distant universe are quasars: supermassive black holes that are actively feeding in galaxies at great distances. Everywhere there’s an intervening cloud of gas, a portion of that quasar light gets absorbed, as whatever atoms, molecules, or ions that are present will absorb that light at those explicit quantum frequencies particular to whatever particles are present at whatever redshift they’re located at.

You might think that deuterium, being an isotope of hydrogen, would be indistinguishable from hydrogen itself. But when it comes to the frequencies that atoms emit or absorb light at, they’re determined by the energy levels of the electrons in that atom, which depend on not just the charge of the atomic nucleus, but on the ratio of the electron mass to the mass of the nucleus itself. With an extra neutron in its nucleus, the deuterium absorption line overlaps with, but its peak is off-center from, the peak of the normal hydrogen.

By looking at the best quasar data we have in the Universe, and finding the closest-to-unpolluted molecular clouds that exist along their lines-of-sight, we can reconstruct the primordial deuterium abundance to extreme precision. The latest results tell us that the amount of deuterium in the Universe, by mass, was 0.00253% of the initial hydrogen abundance, with an uncertainty of only ±0.00004%.

This corresponds to a Universe that’s made up of about 4.9% normal matter: consistent within ~1% of what the Cosmic Microwave Background reveals, but completely independent of that result.

But are we certain that we have the nuclear physics worked out correctly? After all, there’s a big difference between “we understand the laws of physics and how the equations work, and here’s what we predict,” and “we recreated the conditions that were present and demonstrated that the outcomes are in line with our theoretical predictions.” The first allows us to make a prediction — which we can then compare with our observations — but the second would experimentally confirm that our predictions are actually worth their weight in heavy isotopes.

For the nuclear processes involved in both creating and burning deuterium, that’s where deuterium fuses with a proton to form helium-3, an uncommon, light, but stable isotope of the element helium.

Last year, at an underground laboratory in Italy, a plasma physics experiment at the Laboratory for Underground Nuclear Astrophysics (LUNA) went and recreated the high temperatures and densities that were present during the hot Big Bang, and went to observe the reactions between deuterium and protons directly. It took three years to measure enough different conditions to high-enough precisions to recreate the necessary temperature ranges, but when all was said and done, they had the best measurement of this particular reaction rate ever: with an uncertainty of just 1.6%.

Most importantly, though, it confirmed our expectations. Although the uncertainties were larger, previously, the central value didn’t shift by very much at all, meaning that our estimates for how the deuterium abundance corresponds to and translates into an overall matter density was actually extremely good. The Universe, as best as we can tell, really is made of about 5% normal matter, and no more than that.

This is a conclusion whose importance cannot be overstated. There’s an awful lot we don’t understand about our Universe today, including why we live in a Universe where so much of what exists lies beyond the reach of our observation. There are a lot of reasons to be skeptical of dark matter and dark energy, for instance: they’re tremendously counterintuitive. Just because the Cosmic Microwave Background tells us they must be there, for example, doesn’t mean they necessarily exist. If that one line of evidence is flawed — either from the data or our analysis — we don’t want our conclusions to suddenly be overturned.

That’s why we demand multiple, independent lines of evidence for a conclusion before we confidently accept it. The science of Big Bang Nucleosynthesis is one of those incredibly important cross-checks. It’s an independent test not only of the Big Bang model of the early Universe, but of our concordance cosmological model. It tells us, all on its own, what the total amount of normal matter in the Universe is. Since the other lines of evidence, like colliding galaxy clusters or the large-scale structure of the Universe, require far more matter than the early deuterium tells us can exist, we can be much more confident that dark matter is real.

When it comes to the Universe, simply starting from the known laws of physics and extrapolating back from our direct observations can get us extremely far. Start with redshifts and distances of galaxies, and General Relativity will give you the expanding Universe. Start with the expanding Universe, and the Cosmic Microwave Background can give you the Big Bang. Start with the Big Bang, and the nuclear physics of the light elements will give you the total amount of normal matter in the Universe. And take the normal matter and our astrophysical observations of how galaxies cluster and merge, and you get a Universe requiring dark matter.

If we confidently want to know what the Universe is made of, we have to ensure we test it in every way plausible. Although it was one of the earliest predictions to arise from the hot Big Bang scenario, the nucleosynthesis of the light elements has often been derided by portions of the community as being too imprecise to draw meaningful conclusions from. With the latest observations and experiments, it’s clear that time has passed. The Universe has only 4.7-5.0% normal matter in it, and the rest, in some form or other, is truly dark.