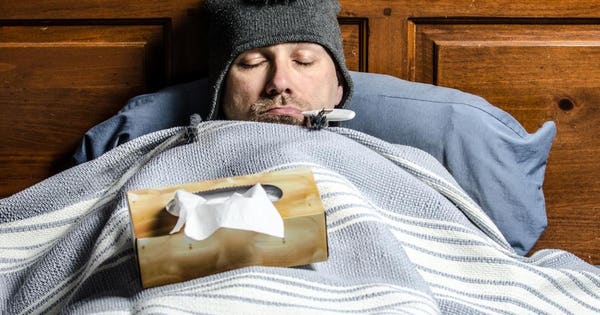 A man sick in bed with a thermometer in his mouthGetty

Sleep is important to good health, and most people have first hand experience of how a good night’s rest can make a big difference when the body is fighting an infection. Meanwhile, research has shown that sleep loss and poor sleep quality impairs the immune response and can even delay wound healing.

To understand why this has such an important effect, we need to step back for a minute and look at how T-cells work in the first place.

When fighting an infection, the immune system sends a variety of immune cells into battle, each with a different task. T-cells primarily work on the front line where they recognize and kill infected cells.

Of course, in order for a T-cell to kill an infected cell, it first needs to attach to the cell. To do this, the T-cell activates sticky proteins called integrins. Working a bit like grappling hooks, these proteins help the T-cell latch onto the infected cell long enough to inject toxic molecules.

Stoyan Dimitrov, Luciana Besedovsky and their colleagues at the University of Tübingen in Germany believed that sleep might affect this process, so they decided to take  a closer look at a collection of molecules known to increase the activity of the Gαs-coupled receptor. These molecules — which include the hormone adrenaline and the inflammatory molecule prostaglandin — are known to suppress immune responses, though it was not known how.

The researchers discovered that this collection of molecules are able to prevent T-cells from activating their sticky integrins. Without active integrins, a T-cell can’t grasp an infected cell in order to kill it.

So, what does this have to do with sleep?  Well, levels of hormones and inflammatory molecules change during our nightly snooze. In particular, sleep is associated with lower levels of those molecules that activate the Gαs-coupled receptor, including adrenaline and prostaglandin.

Dimitrov, Besedovsky and their colleagues reasoned that, because of this, your T-cells have less interference and can do their job better when you sleep.

To test this, the researchers took samples of white blood cells, including T-cells, from healthy volunteers as they either slept through the night or stayed awake all night. The sleeping participants’ blood was collected via an intravenous catheter in their forearms, so they were not disturbed for blood samples during the night.

Thus, the study shows that sleep is good for your immunity because it essentially turns down the dimmer switch on the activity of the Gαs-coupled receptor. Conversely, when we get too little sleep, this receptor becomes more active and makes T-cells less sticky. As a result, T-cells become less efficient at killing off infections.

“Our findings show that sleep has the potential to enhance the efficiency of T cell responses, which is especially relevant in light of the high prevalence of sleep disorders and conditions characterized by impaired sleep, such as depression, chronic stress, aging, and shift work,” says Besedovsky.

The authors say that therapeutic strategies that improve the ability of T-cells to stick to their targets could also be useful in cancer immunotherapy, so that T-cells can better attach to and kill cancer cells.