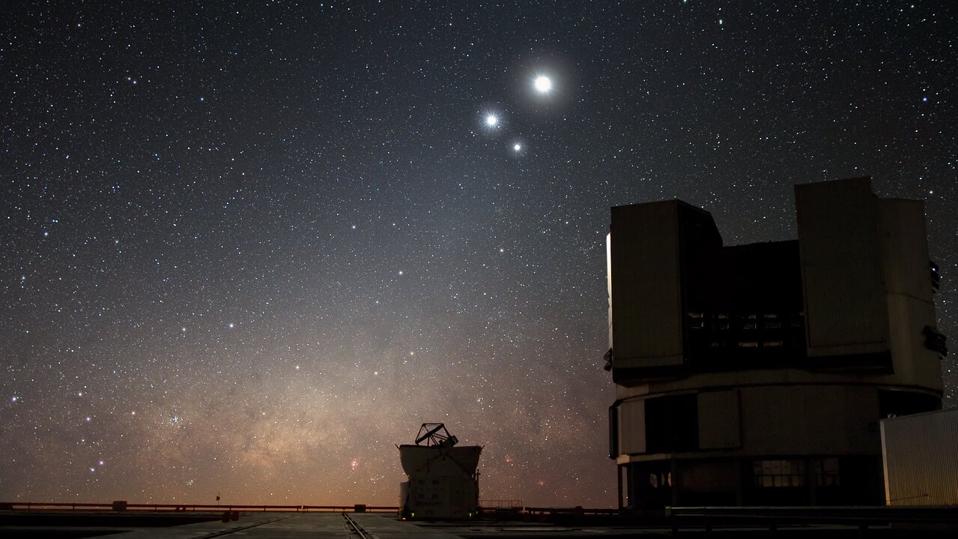 The next one isn’t until Mars, Saturn and Mercury appear close in 2026.

So you need to get ready for February 25-28, 2021, when the outer gas giant planets Jupiter and Saturn are visited—from our point of view, at least—by the tiny planet Mercury.

Here’s everything you need to know about how, when and where you can see this rare planetary trio.

When is the three-planet ‘conjunction?’

From Thursday, February 25 through Sunday, February 28, 2021, Jupiter, Saturn and Mercury will be loosely aligned, with Jupiter gradually moving closer to Mercury over the course of those few mornings.

However, unlike their conjunction six weeks ago in the evening skies of January, this three-planet conjunction will take place in the pre-dawn morning skies.

Why is it visible over several mornings?

When two planets are passing close to each other there’s one night where they can be seen at their closest—as was the case for December 21’s “great conjunction.”

However, in the weeks since that very rare event, not only has our line of sight to these three planets radically changed, but there’s no one specific time when all three planets are at their closest.

Where is the three-planet ‘conjunction?’

The action will take place low on the eastern horizon just before dawn from February 24 when Jupiter will be seen closest to the horizon, with Mercury above it and Saturn higher still towards the southeast.

As the week wears on, Jupiter will rise higher above the horizon and appear to move closer to Mercury.

A three-planet conjunction must be a “triple conjunction,” right? Wrong. A triple conjunction is actually when two planets closely pass each other three times in a short period. How can that happen? It’s because we see the night sky from a moving platform. As Earth orbits the Sun we see the faster-moving inner planets, Venus and Mercury, appear to shift position quickly, while the slower-moving outer planets—all the rest—appear to move much more slowly.

Regardless, it’s our own quickly shifting position that ensures that all the planets appear to rapidly change position. The outer planets also all appear to move backwards—something called “retrograde motion”—as we undertake them. Here’s an easy way to think about that; a car traveling at 80 mph will appear to go backwards when viewed through the window of a passing car going at 90 mph.

Instead, a three-planet conjunction is known as a “planetary trio,” which refers to when three planets occur in the same 5º area of sky.