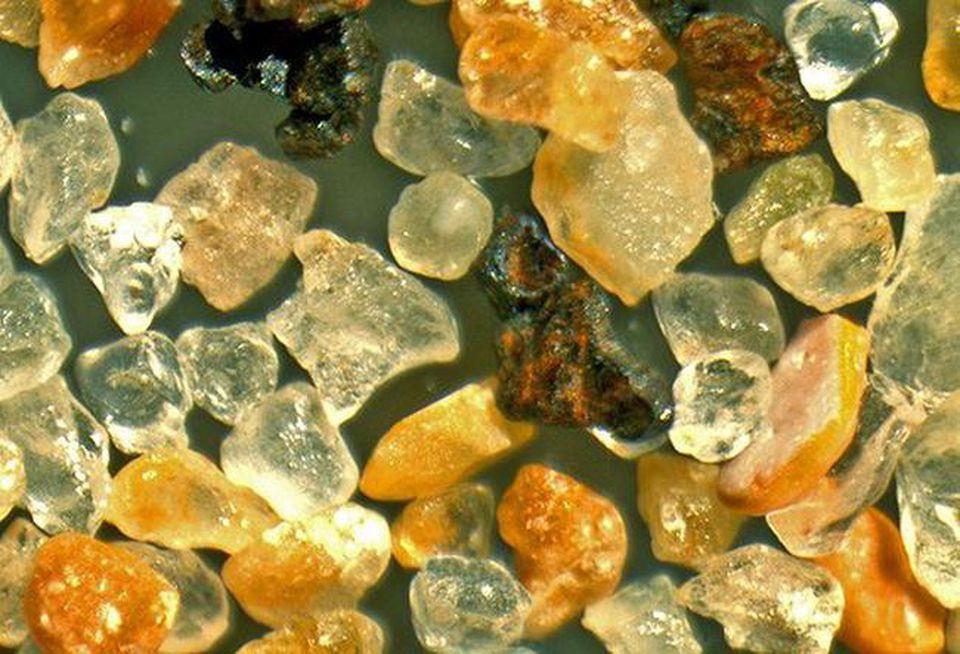 In June 1988, geologists Earle F. Mc Bride and M. Dane Picard collected some sand from the beach of Normandy in northernmost France. The sand reflects the rocky outcrops found inland and along the coast and is composed mostly of grains of quartz, feldspar, limestone and fragmented shells.

But observing the samples under the microscope, the two geologists found also magnetic grains and small spheres of iron and glass. They realized quickly that those were sedimentary particles generated by the battles during D-Day. On June 6, 1944, more than 156,000 troops landed here during Operation Overlord, the Allied operation that launched the successful invasion of Nazi-occupied Europe during World War II. A series of bloody battles ensued on the beach, resulting in nearly 10,000 casualties. The magnetic grains are the fragments of metallic shells and ammunition, while the glass is actually quartz sand melted by the heat of exploding grenades.

Geologists believe that the metallic and glass particles in the sand will survive erosion by waves for 100 to 1,000 years, maybe even longer.

World War II was a global war that lasted from 1939 to 1945. Directly involving more than 100 million people from more than 30 countries, the major participants threw their entire economic, industrial, and scientific capabilities behind the war effort. Armies included millions of soldiers, and countless motorized vehicles, trucks, tanks, ships and airplanes.

A study published in the journal Current Biology shows how the war also influenced marine microorganisms communities, suggesting that World War II may even enter the fossil record.

Sediment cores collected from different sites of the Bay of Brest (northeast Atlantic, France) allowed scientists to reconstruct how marine microorganism communities changed in the last 5,000 years. The study analyzed the abundance of diatoms, dinoflagellates, and other single-celled marine organisms in the mud layers of the cores.

The relative abundance of the various microorganisms remains the same for most of the analyzed 7-feet deep cores, but there is a sudden shift in the upper, most recent mud layers. Around 1941 dinoflagellate diversity changes and diatoms become dominant.

Similar shifts in modern marine microorganism communities are often associated with pollution from industries or nutrients-contamination due to run-offs of agricultural fields through water catchments and rivers.

Analyzing the chemical composition of the cores, the study notes that the shift coincided with heavy-metal and organic compounds pollution dating to the 1930s to 1940s. The authors suggest that military operations during World War II acted as a major source of pollutants affecting the composition of marine communities. During D-Day alone a 1,200-plane airborne assault preceded an amphibious assault involving more than 5,000 vessels.

Toxic elements like lead and mercury were released by burning fuel, organic compounds from fuel and oil spills, and metals like lithium, aluminum, and nickel come from vehicles and other machinery. After the war and especially from the 1980s to 1990s, microorganisms follow chronic contaminations of agricultural origin, never recovering to pre-industrial levels.

As microorganisms like the studied groups possess a resistant shell or form hard-shelled resting cysts during unfavorable living conditions, they have a high fossilization potential. When they die, their shells and cysts sink to the bottom of the sea and mud deposited by marine currents there protects them from further erosion.

The shift in communities could become part of the fossil record and preserve the effects of World War II on the environment for the next million years.

Our Planet, Our Home┃ An Earth Day Perspective
Podcast: Tesla fatal crash goes viral in media, another price change, Cadillac Lyriq, and more
Our sense of time is warped when we catch the eye of another person
Startup and established IoT satellite operators exchange blows in regulatory battle
A circular approach to electrification and renewable energy