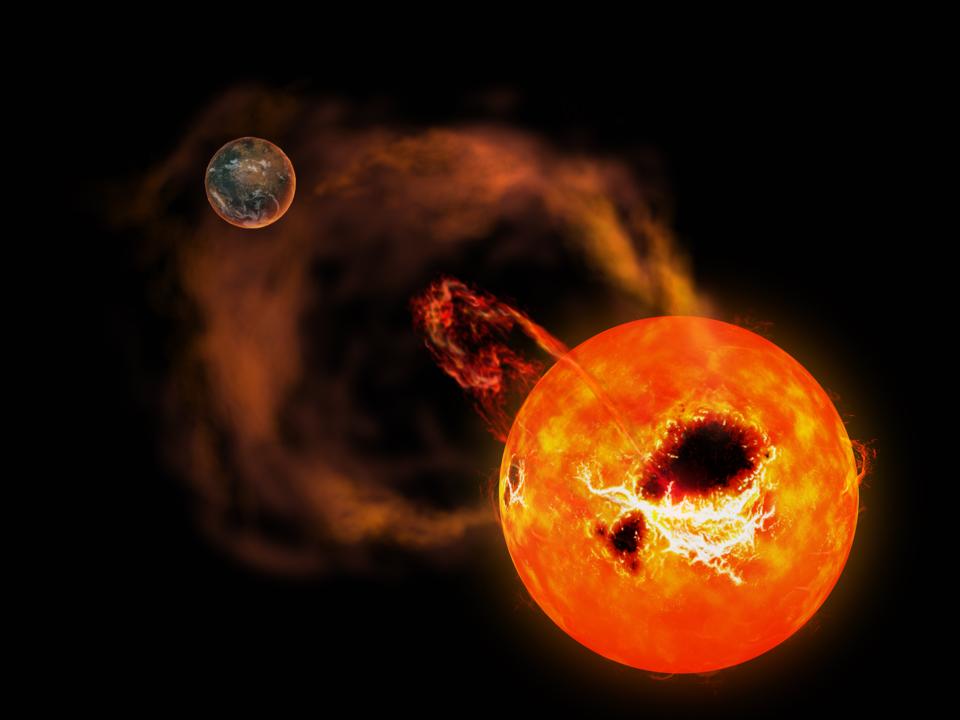 Our own Sun may be going through a quiet phase, but some stars out there are more active than ever. Astronomers in Japan are today reporting their detection of a huge “superflare” from a star that measured about 20 times larger than those emitted by our own Sun.

No comparable flare has ever been detected before, but since superflares are thought to be possible on our own Sun, the discovery is a rare chance to gather data—and a real wake-up call.

Meanwhile, if superflares around M-type stars are common then it’s perhaps unlikely that any kind of life could exist on exoplanets that orbit them. The radiation levels would just be way too high.

A regular solar flare is a sudden flash of increased brightness on a star close to a group of sunspots, which sometimes come with a coronal mass ejection (CME) and cause massive magnetic storms.

A superflare is a very strong explosion with energies up to 10,000 times that of typical solar flares. “Solar flares are sudden explosions that emanate from the surfaces of stars, including our own Sun,” said Kosuke Namekata, first author of a new paper published in Publications of the Astronomical Society of Japan. “On rare occasions, an extremely large superflare will occur. These result in massive magnetic storms, which when emitted from our Sun can affect the Earth’s technological infrastructure.”

Where was the superflare detected?

It was found at a star called AD Leonis (also called Gliese 388) in the constellation Leo, the Lion. It’s very close to Algeiba, one of the bright stars that makes up the Lion’s neck (see above).

About 16 light-years away, AD Leonis is a red dwarf or “M-type” star. It’s cooler than our Sun, which means more flares.

The most common stars in the universe, red dwarfs are main-sequence stars that burn hydrogen like the Sun, burning hydrogen, but they’re substantially cooler, dimmer; redder and smaller.

The researchers from Kyoto University’s Graduate School of Science and the National Astronomical Observatory of Japan—who spent a week looking at AD Leonis—expected a number of these flares to be large, but were astounded to detect a superflare on their very first night of observations.

How was the superflare detected?

The superflare was one of 12 flares around AD Leonis detected by astronomers using Kyoto University’s 3.8 meter Seimei Telescope atop Okayama mountain west of Kyoto, Japan.

Light from excited hydrogen atoms in the superflare indicated that there were roughly 10 times more high-energy electrons than seen in typical flares from our Sun.

“This is the first time this phenomenon has been reported, and it’s thanks to the high precision of the Seimei Telescope,” said Namekata.

Why are superflares a warning to Earth?

Magnetic solar storms and superstorms caused by solar flares and increased activity on the Sun—collectively called “space weather”—are potentially a major threat to modern life on Earth. In particular, the charged particles that stream towards Earth as hot ionised gas can, have, and will again affect satellites, aviation, power grids and communication.

How do superflares affect the search for life beyond Earth?

Many M-type stars are known to intermittently let-off huge flares and outbursts that start to sweep away any planet’s atmosphere, which all but precludes the existence of life on any orbiting planets.

If superflares around such stars are common, then that goes double. “We may even be able to begin understanding how these emissions can affect the existence—or emergence—of life on other planets,” said Shibata.

Previous research indicates that flares from the youngest red dwarf—approximately 40 million years old—are 100 to 1,000 times more energetic than when the stars are older.