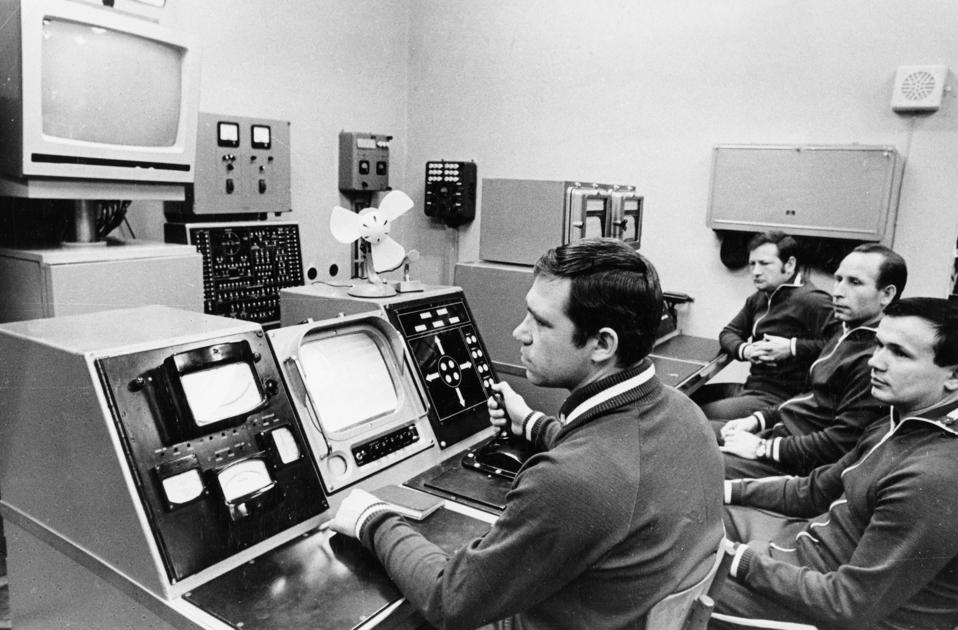 No matter how advanced our technology becomes, there are certain limits that can never be overcome. Perhaps the most famous limitation is this: nothing in the Universe can communicate information or send signals at speeds greater than the speed of light in a vacuum. This cosmic limit — of 299,792,458 meters per second — can never be broken. No matter how much energy you put into a signal, no matter whether it’s carried by photons or gravitational waves or massive particles, no matter even if it’s been entangled with another particle quantum mechanically, information simply cannot be transmitted faster than light.

This isn’t an incredibly big deal for most practical purposes, as signals between any two points on Earth can be exchanged in mere milliseconds. But if we’re going to communicate with anything off-world, such as a robot on the surface of Mars, the speed of light is a horrific limitation. The information we receive doesn’t show Mars in real-time, but rather as it was several minutes ago. The signals we send to Mars, similarly, won’t arrive for several minutes, either.

How, then, could we ever hope to do something as intricate as fly a helicopter on Mars? This is the science behind why Ingenuity is so amazing.

The story of our first Martian helicopter actually goes back to the 1990s, when the first remote rover — Sojourner — was deployed on Mars. Previously, remote controlled vehicles, like the Soviet Union’s Lunokhod, had been manually controlled by humans on Earth. A human would receive remote data from the spacecraft, send the commands telling the rover what to do, and when the signal arrived, the rover would do it.

From the Earth to the Moon, a round-trip delay of about 2.5 seconds accompanied every signal: a significant, but not prohibitive amount. If the rover appeared that it was headed for an obstacle — a stray rock, an outcropping, or a crater of some type, for example — the visual signal would:

and, at last, the rover would respond.

That’s a plausible approach to vehicles on the Moon, considering how small the light-travel-time is from the Earth to the Moon and back. But on any other world in our Solar System, the distance isn’t measured in hundreds of thousands of kilometers, but rather in the tens (or, for some worlds, hundreds) of millions of kilometers. Instead of taking mere seconds to receive signals from and send signals to a remote, robotic vehicle, it takes minutes or even hours.

To send a signal to Mars, the one-way travel time of a light wave varies tremendously. When the Sun, Earth, and Mars all form a straight line with the Earth between the Sun and Mars, it takes only a little over three minutes for a light signal to traverse the distance. But when the Earth and Mars are on opposite sides of the Sun, it can take up to 22 minutes for signals to be exchanged. Clearly, if a rover was about to encounter something hazardous, this is far too long of a delay for humans to responsibly react. The only solution, if we insisted on manual control, would be to drive so slowly that any identifiable hazard could be avoided in time.

However, with the launch of NASA’s Mars Pathfinder mission, the small but adventurous rover, Sojourner, was deployed for the first time. Similar to Ingenuity, it was largely an experimental “proof of concept” vehicle. Could we send a rover to Mars? Could it operate under the stressful Martian conditions? Would a larger spacecraft serving as a relay station — Mars Pathfinder in the case of Sojourner, Mars Perseverance in the case of Ingenuity — be able to work with the smaller craft to facilitate command and communication between Earth and this novel device?

Although Sojourner didn’t go far, roving only a total distance of ~100 meters (330 feet) during its time on Mars, it was active for a total of 83 days: more than 10 times as long as its planned 7 day lifetime. Its scientific instruments did successfully collect the data it was designed to collect, and the setup enabled us to tell it what to do in a variety of situations: a sort-of “if… then” scenario.

The success of Sojourner enabled planetary scientists to build upon it, creating future generations of rovers that were more powerful, had greater autonomy, and that could perform an incredible series of operations without needed a human to intervene.

Sojourner was followed up first by the twin Mars rovers: Spirit and Opportunity, whose planned 90-day missions were both extended for many years. Unlike Sojourner, Spirit and Opportunity weren’t just rovers, they were their own, standalone science stations. Capable of responding to intricate programming, they roved for many kilometers — with Opportunity completing the first-ever Martian “marathon” — exploring unprecedented swaths of the Martian terrain.

The Curiosity rover was the successor to Spirit and Opportunity: larger, faster, equipped with more powerful science instruments and capable of overcoming more complex hazards on its own. Still operational, it paved the way for Perseverance: the most advanced rover ever on another planet.

And yet, perhaps the most spectacular thing that Perseverance has done so far is this: it’s taken video of NASA’s Ingenuity Mars Helicopter during each of its first three flights, all of which have been successful.

Just as Sojourner was (mostly) a technological demonstration, testing a new capability for the first time with a small, simple design, Ingenuity goes even a step further with its spartan design: it has no scientific instruments aboard it at all. Instead, its sole purpose is to push the limits of powered flight in an extreme environment: on Mars, where the atmospheric pressure at the surface is just 0.7% of what it is on Earth. To put that in perspective, you would have to pressurize the atmosphere of Mars to exert 140 times the amount of force it does to equal Earth’s atmospheric pressure.

How do you fly in that environment? And, moreover, how do you deal with the Martian winds, which — despite the low density of Mars’s atmosphere — typically blow at around 35 kilometers-per-hour and frequently reach speeds of hundreds of kilometers-per-hour?

The tiny, 1.8-kilogram (4 pound) helicopter was designed to overcome exactly these obstacles. And, like everything that we send to Mars, it has to deal with the extreme difficulties of the Martian environment.

While daytime temperatures on Mars can equal that of a sunny spring day here on Earth, they plummet at night to -90 C (-130 F) at Perseverance’s location. Because of how tenuous the Martian atmosphere is, Ingenuity has to be light, with rotor blades that are larger and spin faster than a comparable helicopter on Earth. The only benefit is gravity: on Mars, the acceleration towards the center of the planet is only about one-third of what it is on Earth, which makes it easier for the spinning blades to lift its lightweight mass.

But the biggest asset to Ingenuity is its computerized “brain.” While project engineers back on Earth will map out a flight path for the helicopter, these large distances (and long light-travel-times) mean that Ingenuity has to make many of its own decisions. To that end, it:

and much, much more. Engineers map out the flight paths; Ingenuity makes the other decisions for itself.

So far, as of April 27, 2021, Ingenuity has attempted three test flights, with three successes. During its first flight, it rose up, hovered for about ~30 seconds, and then landed. Its second flight was a bit longer, reaching a higher maximum altitude, including sideways movement, and lasting for a duration of ~52 seconds. And, most recently, its third flight was a tremendous success: it rose up, traveled a full 50 meters (164 feet) down its flight path, and then returned to its original location, where it stuck the landing.

Ingenuity and Perseverance are scheduled to remain together at this initial site for a total of 30 days, with Ingenuity optimistically hoping to achieve at least five separate flights. As far as anyone can tell, Ingenuity’s flight performance is meeting every expectation set for it, and its achievements continue to bring us closer to the ultimate goal: of a successful set of test flights that pave the way not just for landers, orbiters, and rovers on Mars, but for aerial exploration within the Martian atmosphere while above the Martian surface as well.

This is the real goal of Ingenuity: to pave the way for a future suite of aerial explorers of Mars, and possibly beyond. For a long time, landing on Mars was an extraordinarily perilous endeavor, with only one out of every three missions succeeding as of ~2003. But NASA’s recent string of successes has upped the cumulative total from a 1-in-3 success rate to a 1-in-2 rate; we can almost take the landing for granted. Now, the challenge is what novel things we’ll do when we arrive.

Current orbiters are high overhead; rovers are limited in the speed at which they can move, the amount of terrain they can cover, and the types of terrain they can scale. The idea of a low-flying helicopter brings up some tantalizing possibilities for exploration, including:

With another set of test flights still ahead of it, Ingenuity might not just represent the first steps, but the first giant leaps, towards the aerial exploration of other worlds.

Mars is an entirely inhospitable world in a lot of ways. Its thin, tenuous atmosphere often blows at wildly incredible speeds, giving rise to dust storms and whimsically carrying anything that happens to be in its atmosphere wherever those winds blow. Its temperature extremes are a challenge to survive, particularly for robots with intricate, mechanically moving parts. And its great distance from Earth places a terrible constraint on what we can manually accomplish: anything that requires a reaction faster than the round-trip light-travel-time must be accomplished in situ on Mars, without human intervention.

And yet, we’ve conquered the journey across interplanetary space to arrive at Mars. We’ve conquered the bonds of gravity, sending orbiters around Mars and landers to its surface. We’ve overcome the challenges of the Martian surface, with rovers that can cover dozens of kilometers over their lifetimes. And now, for the first time, we’re conquering the Martian atmosphere, with the successful demonstration of powered flight on another planet. What we’re witnessing is, in its own way, the culmination of our aeronautics technologies, but it’s also the start of something big: the aerial exploration of worlds beyond Earth.

Two riders, one e-bike: Dual passenger electric bikes offering twice the work and play
How Long After Having Covid-19 Can You Get The Coronavirus Vaccine?
The road to electric vehicles is paved with disruption
Op-ed | The Senator and the Commander
Meet Megan McArthur, Crew-2 Pilot