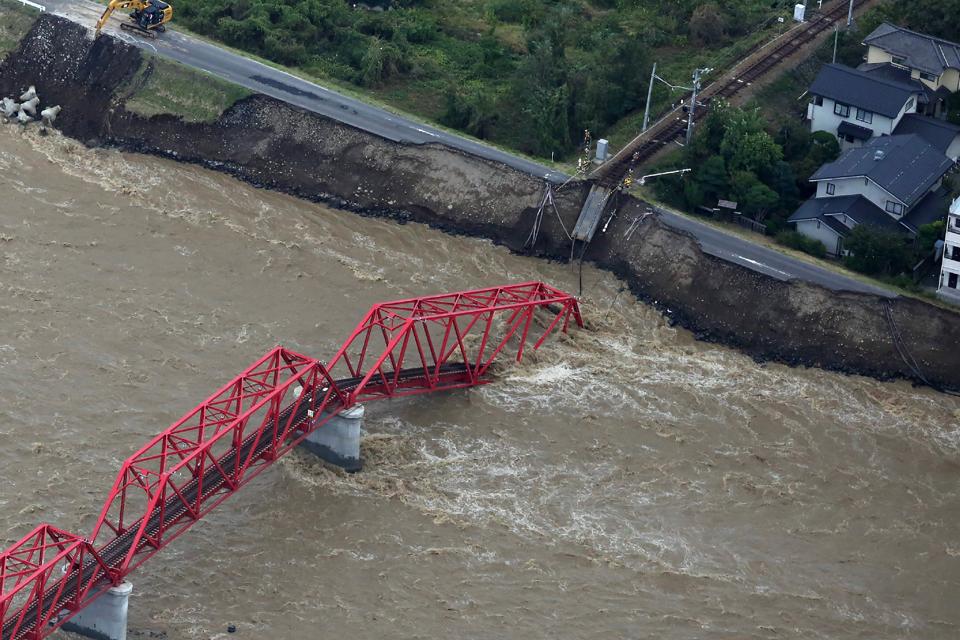 It’s the worst storm to hit Tokyo and the island nation in decades, and the aftermath reflects how both Japan and the climate have changed over the past 60 years.

Typhoon Hagibis looks an awful lot like Ida, the storm that struck the country in 1958. Both storms formed in the western Pacific and rapidly intensified to the equivalent of a category 5 hurricane. Both then weakened as they made landfall and swung across the island of Honshu, dropping plenty of rain and triggering destructive landslides in the process.

At the time, Ida dropped an unthinkable 17 inches of rain. But in this warmer era, the air is able to hold more moisture, which then gets released on land. A remarkable 37 inches of rain is reported to have fallen on the mountain resort town of Hakone outside Tokyo over the past few days.

A deluge like that triggers mudslides and inundation downstream. One of the worst hit spots has been Nagano, on the opposite side of Mt. Fuji.

Japanese broadcaster NHK reports that, as of this writing, at least 28 people have died, 18 more are missing and 177 have been injured by the storm and its aftermath.

While this is certainly a tragedy, and it will be weeks before the extent of the damage to property is known, it’s a dramatically different outcome from Ida, which killed over 1,200 people in 1958.

It could be argued that Japan is among the most prepared places on the planet to be struck by such a massive storm, thanks to its high degree of modernization, which is widespread across the nation.

And yet, still, in a place better equipped for catastrophe than most, the images out of Japan remain harrowing today.

A number of the nation’s iconic bullet trains have reportedly been damaged, bridges and roads have been washed out, levees breached and bags of waste from the Fukushima nuclear accident were swept into a local river.

Storms like Hagibis are growing more common, and at a surprising pace. The odds are, as we see more of these huge, strong and wet storms, most will hit places that are less able to cope with them than Japan.

Put another way, the images of devastation coming from Japan right now could represent the best outcome we can hope for from one of these storms, which we’re now seeing multiple times a year. The more widespread destruction like that of Grand Bahama by Hurricane Dorian just last month is arguably the more likely scene going forward.

This is all to say that there’s a lot of work to be done. The climate is already changing and these storms will continue to crop up. The time for adaptation and preparation is now. Japan has been modernizing for decades and that work may have prevented hundreds of deaths this weekend.

A similar, global effort needs to be undertaken to harden our defenses and adapt to life in this new era called the Anthropocene.