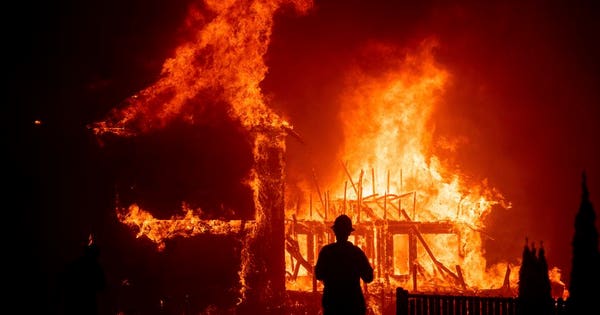 A fast-moving, wind-driven wildfire in northern California has already destroyed thousands of homes in Butte County and the town of Paradise. As night was falling on Thursday, emergency responders were reporting that dense smoke from the so-called Camp Fire was severely hampering efforts to get a handle on the situation.

According to police radio traffic, emergency personnel were unable to see through the smoke using thermal imaging equipment, either from the ground, air or space. As a result, crews have struggled to determine exactly where the leading edge of the fire is and what direction it is moving.

However, personnel from CalFire later said that fire is “moving in all directions” and that it was too dangerous to attempt to fly aircraft into the smoke to better assess the fire’s movement until the morning.

Gravity waves of smoke from #CampFire as its plume travels over mountainous terrain, not something you see every day! pic.twitter.com/JgInAQqC9H

Further complicating the situation and adding to the destruction is the apparent emergence of spot fires in the area that can be caused by hot embers carried on the winds. Burning embers can fly ahead of the main front of the fire or help spread it in other directions.

There have also been reports of injuries and burns to residents and firefighters due to flying embers.

The widespread destruction sowed by the flames over the area has knocked out infrastructure, further hampering efforts to fight the fire.  Power outages have affected water pressure, making it more difficult for firefighters to refill their tankers.

We’ll keep an eye on new developments as the fire approaches the larger college town of Chico just a few miles away.

For the first time, an ‘ultra-hot Neptune’ has been discovered orbiting a Sun-like star
Plug-in hybrids called a ‘wolf in sheep’s clothing’ as study claims emissions are higher than thought
Geophysical Survey May Have Found Secret Chambers In King Tut’s Tomb
Researchers Identify The 6 Most Common Problems That Plague Romantic Relationships
German chipmaker Infineon prepared to handle increased competition from China, CEO says