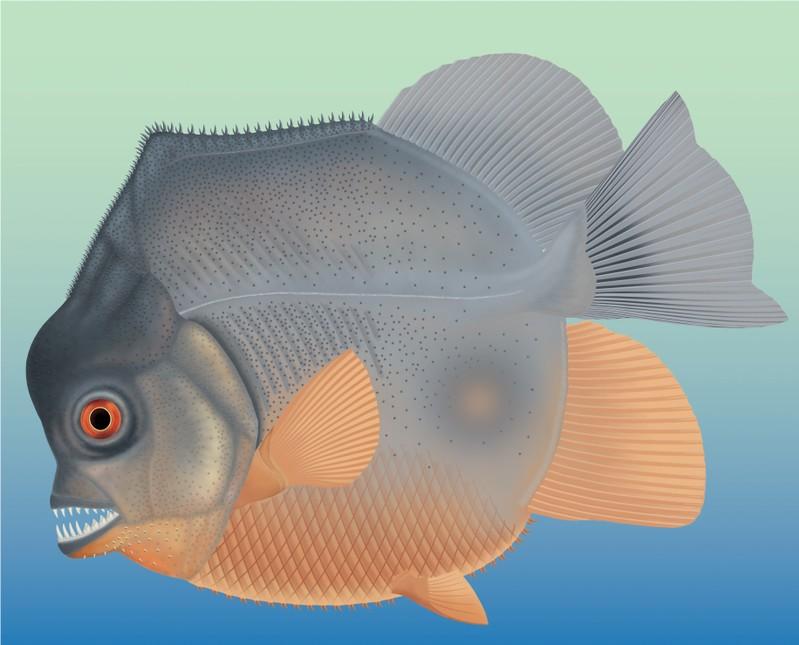 WASHINGTON (Reuters) – You can call it a prehistoric prequel.

A new piranha-like fish from Jurassic seas with sharp, pointed teeth that probably fed on the fins of other fishes is seen in this artist’s reconstruction of a fossil which was discovered in southern Germany in this image released from Eichstaett, Bavaria, Germany on October 18, 2018. Courtesy G. Horsitzky, The Jura-Museum Eichstaett, Germany/Handout via REUTERS

Scientists said on Thursday they have unearthed in southern Germany the fossil of a fish that, with its mouth full of razor-sharp teeth, strongly resembled today’s piranhas, the stars of more than their fair share of Hollywood horror films. But this one lived during the Jurassic Period 152 million years ago.

Named Piranhamesodon pinnatomus, it is the earliest known example of a bony fish – as opposed to cartilaginous fish like sharks – able to slice flesh rather than simply swallowing prey, enabling it to attack victims larger than itself as piranhas can.

A new piranha-like fish fossil from Jurassic seas with sharp, pointed teeth that probably fed on the fins of other fishes, discovered in southern Germany from the time of dinosaurs and from the same deposits that contained Archaeopteryx, is seen in this image released from Eichstaett, Bavaria, Germany on October 18, 2018. Courtesy M. Ebert and T. Nohl/Handout via REUTERS

Piranhamesodon, about 3-1/2 inches (9 cm) long, lived in the sponge and coral reefs of the Solnhofen archipelago, a shallow tropical sea in what is now Bavaria. Piranhas are freshwater fish that inhabit rivers and lakes in South America.

Piranhamesodon was small, but its mouth was worthy of a scary movie. It boasted long, pointed, dagger-like teeth along the outer edge of its upper jaw and at the front of its lower jaw. It also had triangular teeth with serrated cutting edges on the side of its lower jaw.

“We were stunned that this fish had teeth which are capable of slicing flesh. It comes from a group of fishes, the pycnodontids, that are famous for their crushing teeth,” said paleontologist Martina Kölbl-Ebert of the Jura-Museum Eichstätt in Germany, who led the research published in the journal Current Biology.

A new piranha-like fish from Jurassic seas with sharp, pointed teeth that probably fed on the fins of other fishes is seen in this artist’s reconstruction of a fossil which was discovered in southern Germany in this image released from Eichstaett, Bavaria, Germany on October 18, 2018. Courtesy G. Horsitzky, The Jura-Museum Eichstaett, Germany/Handout via REUTERS

The fossil came from the same Bavarian limestone deposits as Archaeopteryx, the earliest-known bird.

“From the same quarry, we also have a number of other fish which may have been the victims of Piranhamesodon. They show injuries to their fins and fin bases, some freshly wounded before they died and got fossilized, whereas others show completely healed injuries with regeneration of the fin,” Kölbl-Ebert said.

While it shares traits with piranhas, Piranhamesodon was neither their long-ago ancestor nor related to them at all. The oldest-known piranhas lived around 15 million years ago.

Piranhamesodon is an example of a phenomenon called convergent evolution in which organisms independently acquire similar characteristics as a result of adapting to similar ecological niches or environments.

“The new fish is a most interesting example of convergent evolution, evolving – for bony fish then – a completely new way of life,” Kölbl-Ebert said.

Red blood cell tension protects against severe malaria in the Dantu blood group
If The Big Bang Wasn’t The Beginning, What Was It?
A Sneaky Tropical Storm Or Hurricane Threat In The Gulf Of Mexico – What You Need To Know
Don’t Bet On Aliens: Phosphine Is Amazing, But Doesn’t Mean ‘Life On Venus’
Wall Street has wanted an Apple bundle for years — soon it might get one