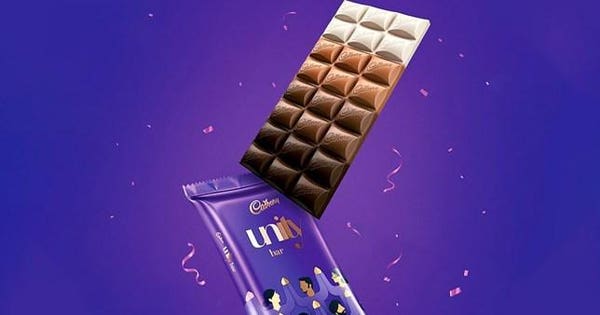 Brands are beginning to realize the power of incorporating diversity and inclusivity in their marketing and product development.

At Adobe Annual Conference in 2018, Matt May, Adobe’s head of inclusive design, stressed that “the time is now to rethink how designers create products with diversity and inclusion in mind.”

Most recently, I have seen a new chocolate bar, called the Unity bar, from Cadbury Dairy Milk, which was launched to mark Indian Independence Day. The brand wrote, “This Independence Day, let’s celebrate a country that stands united in its diversity. Presenting the Cadbury Unity Bar, India’s first chocolate with dark, blended, milk and white chocolate all under one wrap.” I saw this campaign launched by Oglivy almost two weeks ago when it was first launched on the 15th of August and it baffled me. This product seems to trivialize a very serious issue such as racism. By creating a blended bar with four different shades of brown, Cadbury intended to celebrate the multi-cultural society in India. Instead, they have created a product that demonstrates what tokenistic diversity looks like. It is a very good example of how brands get their message of diversity and inclusivity wrong.

Cadbury isn’t the first brand to get it wrong. Previously, Nivea came under fire for an advert that proposes ‘White is purity’. And, Pepsi got it wrong too when they implied in one of their adverts that black men are more likely to be criminals.

Diversity branding can sometimes do more harm than good. Researchers from the University of Washington, UCLA, and UCSB have shown that the diversity policies, diversity training, and diversity awards cause white people to be less likely to believe racial discrimination exists. Not all representation is truly inclusive. But such superficial attempts at representation, even when it is incorrect, or using cultural appropriation, can be used as an excuse to minimize the harmful impact of systemic and structural racism and prejudice against other marginalized communities. Without data to prove that an organization or brand is truly diverse and inclusive, such diversity initiatives can create what has been called a ‘fairness illusion’, where the negative accounts of women and people of color that work at these companies will be disregarded even more often.

Inclusive design starts with a truly diverse and inclusive design team and environment. The design has to reflect the true philosophies and ethos of the organization. When we see brand marketing and product design going wrong, it is usually because of the lack of a truly diverse team that can bring multiple viewpoints. When designing for a particular community or audience, it is essential to have designers, and advisors from these communities who can bring the first-person experience to the process. Using someone as a consultant as an after-thought is not enough. They have to be part of the process.

When brands are keeping diversity and inclusivity at the heart of their product development, their marketing message has to be less about the brand and the product, and more about how the product empowers people or changes their lives for the better. Cadbury fails to do so. Beyond creating a product that reduces the multi-cultural diversity to four shades of brown, that are kept in their own little boxes, they have shown in no way how this has any real impact on the harmony of the nation or representation of marginalized groups in the society.

An inclusive product should be able to initiate a conversation with the user, and between the diverse communities of users. The focus has to be on the user, and empathy and compassion for the user. Kat Holmes, UX Director at Google, in her book, Mismatch: How Inclusion Shapes Design, believes that “designing for inclusion begins with recognizing exclusion.” This has to be the start. Recognizing and acknowledging the factors that create exclusion, and divisions between different communities have to be the first step towards creating a truly inclusive product or brand identity.

Inclusivity is under real danger of being reduced to being a buzzword. It should be the norm. Instead, it is being called the latest trend. All brands should aim to be inclusive, and diverse, not because it makes them fashionable, and because it results in financial gains. But, because it is the right thing to do.

True diversity is not just shades of brown.