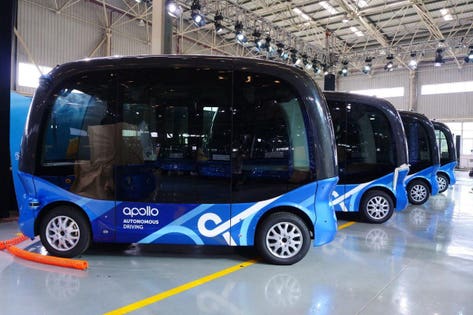 Intel is getting a big opportunity to show off advanced vision technology and software from its Mobileye unit by partnering with Baidu’s Apollo, the Chinese tech giant’s autonomous driving consortium.

Working with Mobileye, Baidu will integrate the Israeli company’s Responsibility Sensitive Safety software into both its open-source Apollo platform shared with partner companies and commercial Apollo Pilot programs, Intel said in a statement. Baidu will also use Mobileye’s camera-based surround computer vision system for automated vehicles being developed for the Chinese market.

Typically known as the Google of China, Baidu has evolved into a major player in autonomous vehicle technology with an alternative approach to that of Alphabet Inc.’s Waymo and General Motors’ Cruise. Rather than developing all the technology needed in-house and on its own, Baidu has promoted an open-source approach to self-driving software and AI with Apollo since April 2017. The effort counts hundreds of companies as partners, more than a 100 of which are auto and tech firms including Ford, lidar maker Velodyne, Bosch, Nvidia, Daimler, Valeo, Jaguar Land Rover, Byton and many of China’s largest domestic auto and truck makers.

Baidu has said it wants Apollo to become the Android operating system of autonomous vehicles, and that it’s taking the lead to ensure the quality of the tech platform. It unveiled Apollo 3.0 on Wednesday in Beijing, with software upgrades for valet parking, and for autonomous mini-buses and micro-cars.

China has placed a priority on being a leader in artificial intelligence and autonomous driving. After the rollout of Baidu’s Apolong shuttles, which operate without a human driver in geo-fenced areas, a slew of Chinese carmakers participating in Apollo have plans to follow starting in 2019 with a range of robotic cars, vans and commercial vehicles.

Tips for a rewarding career in physics – Physics World
Munich’s Oktoberfest is a real gas
Ask me anything: Cather Simpson – Physics World
This adorable tiny record maker lets you cut your own 5-inch vinyl singles
A clarion call for inventors and investors